The Artlii Energon 1 projector comes in two different models, a native 720p and a “Plus” native 1080p variation. They both have a couple unique features compared to other options out there. The biggest reason to consider these models is their ability to reduce the image size all the way down to 25% of its original size. This is perfect for anyone with a large space that wants to still be able to enjoy using a projector. Other projectors tend to only offer a 75% shrink decrease in comparison. If you plan on placing your projector far away from the wall you want to project onto, this could be a major reason for buying one of these. 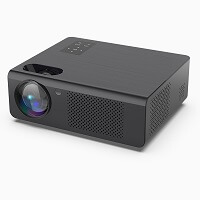 Of course there are other factors to consider such as brightness rating, resolution, and more. It can be really tough deciding between similar options so I’ll try to review as many features to help you make a well-informed decision. There are How about we just jump right into the zoom/shrink functionality as that’s one of the standout aspects you won’t find on many other competing projectors.

Projectors have a minimum and maximum range for their effective use. This can come down to the optics and ability to focus at certain distances from your wall or projection screen. The closest projection distance for this model is 1.5 meters, just under 5 feet, or about 59 inches. The furthest throw distance is 5 meters, which is almost 16 1/2 feet. 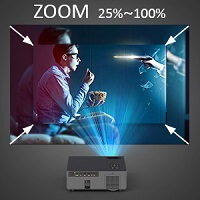 Some people have very large rooms and have a specific place that they can place their projector, like, on the opposite side of a long room or basement. If you tried to use the machine from 16~ feet away you’ll get an image that is around 250 inches big. There’s a chance this will overflow from your wall and onto your ceiling and floor. Now you can see why it could be difficult to fit a projector’s image in these situations.

The majority of projectors can typically only shrink their picture size down to 75%. This may not be enough for you though. The Energon 1, on the other hand, is capable of reducing the original picture down to an extremely low 25%. This means you’ll be able to use your projector in a wider range of locations and scenarios. You can place your machine at almost any distance and still have it fit on your wall. If you’re in this situation, and you’ll be placing your projector at 10 feet or further, this is an important aspect to consider.

This shouldn’t come as a huge surprise, but you really want the highest brightness possible in order to use your machine more easily during the day. However, there are different ratings used by different manufacturers. What you should be aware of is that there is only one accurate metric, called ANSI. This is a universally recognized testing method to determine accurate brightness that you can compare across devices. 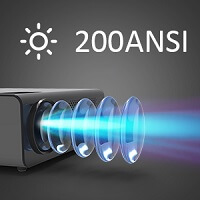 The original rating on the Artlii Energon 1 is 200 ANSI lumens. Note that this appears to be a lower “lumens” number compared to others that don’t use the ANSI metric. Don’t be alarmed by this though as they’re simply measured in a separate way. The popular Nebula Capsule projector is rated at only 100 ANSI in comparison.

Of course every projector looks its best when being used in a dark room. Generally 200 ANSI should allow you to use your machine when there’s some ambient light without too many issues. There are new lumens numbers for 2020 now. The 720p model provides 5500 lux lumens and the 1080p model is rated at the original 200 ANSI lumens.

The contrast of a projector is basically how well the colors appear. If you have a higher contrast ratio you’ll see a more vivid image with deeper colors. The 720p model offers up a 3000:1 contrast ratio and the 1080p variation is a whopping 5000:1 ratio, which will both be better than most of the 2000:1 alternatives. This also means that your picture will be less washed out without “grey-ish” colors. Ambient light in your room can affect colors very easily so it’s best to try to limit that for the best image possible.

Update: Today’s Deal: See this Amazon offer for the newer Artlii 2 model! Note: The Artlii Energon 1 doesn’t seem to be in stock. The company may have discontinued it in favor of the Energon 2 model, which has several improved features and greater performance.

If you’re a cinephile or a gamer then native resolution is a very important factor to pay attention to. A higher resolution means you’ll see a clearer picture with more detail overall. Textures will be more distinguishable and you’ll be able to make out objects that are further away.

When choosing a projector you need to specifically look for the “native” resolution specification. Many low-end models like to say they “support” 1080p but actually internally render at a blurrier 480p. The standard Energon1 model is native 720p and the “Plus” model has a full 1080p rating. This means you’ll be able to enjoy content that looks crisp and sharp in comparison. If you want a full HD 1080p experience then I’d definitely recommend going for the Plus model.

Having solid tech in your projector is great and all, but what if you can’t hook up the devices you want to it? Most projectors nowadays have an HDMI port, which is the input you’ll use with the majority of modern devices such as streaming sticks, gaming consoles, and more. These Artlii models include 2 HDMI ports however, allowing you to keep multiple devices plugged in at any given time. This means you won’t have to constantly be swapping what’s hooked up to your projector.

There’s also an SD card slot and two USB ports that can be used to playback your own video files. If you have videos on your computer that you’d like to enjoy on your projector, just transfer them onto either a USB drive or SD card. I’ll list the video formats that the projector supports according to the company in the “Summary” section below.

For the legacy inputs available I’ll begin with the A/V, or composite port, as it’s also known as. The Artlii projector comes with a 3-in-1 adapter which will give you the ability to use old devices such as a VHS player, DVD player, or anything that uses the classic “red, white, and yellow” ports. I’m not sure how many people will use this compared to the HDMI ports, but it’s a great feature being able to enjoy practically any media you may have from a few decades ago.

The VGA port is a video-only input that’s typically found on older computers, but also on a few other types of machines. If you want to share your computer screen from an older computer you can utilize this input to easily stream or mirror your desktop. Be aware that there isn’t any sound information carried over this cable, so you’ll need to pair it with the auxiliary audio port or something to hear music or sound effects.

Space is obviously limited in projectors due to their overall size. Thankfully, there is a dual audio system built into the machine which will provide you with stereo sound. The company states that they’re rated at 4Ω5-watts of power. This is noticeably better than some alternatives that only have a single 3-watt speaker. 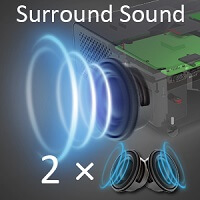 If you want to take your audio experience even further, I’d recommend utilizing the 3.5mm audio port for external speakers. Plugging additional speakers in will help give you that home cinema experience you may be searching for with louder sound, deeper bass, and more. All you should need are speakers or a soundbar with a 3.5mm input and you should be good to go.

I think the original and plus variations of the Artlii Energon 1 projector both offer a ton of positive points and some great features. You’re able to get a crisp image thanks to the 720p or even 1080p native resolution. The brightness and contrast will allow you to use them under several lighting situations. It’s powered by an LED-based system which gives you 50,000~ hours of use. You can do some math to quickly realize just how long this projector may last you. I’d also like to mention that once you get your projector, regardless of which one, you’ll need to use the “focus” and “keystone” dials on the machine to get a clear focused picture. 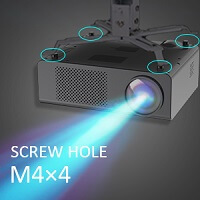 Plus the amount of inputs included allow you to plug in practically any media device you may have. Do you have an old gaming machine from the late 90s or early 2000s? Well, you can plug it in here via the AV/Composite port. How about an old desktop computer you want to use as a media center? Just go ahead and use the VGA port. Thanks to the 2 HDMI ports you’re able to leave multiple modern appliances hooked up as well.

Also, remember that one of the biggest unique features of this model is the 25% image shrinking capability. Many other models only offer a 75% zoom amount. If you plan on placing your projector further away from your wall, then this could be very important for you to ensure that the image fits on your wall. Look over the specs and features and hopefully you’ll be able to narrow down your choices to choose the best projector that fits your needs.

Click the following links and buttons if you’re curious to find out more information on a product page or see the latest offers running. Amazon prices can fluctuate so go ahead and add the projector to your shopping cart to view a complete total price including any fees or coupons currently applied.