At the time of this writing, the AuKing mini projector has been sitting around the top of Amazon’s best selling projector list. Did you notice this fact and want to know whether this model is any good? There are plenty of technical aspects to consider and some drawbacks to be aware of. As always, I’ll try to cover every detail below so you can make a smart decision. 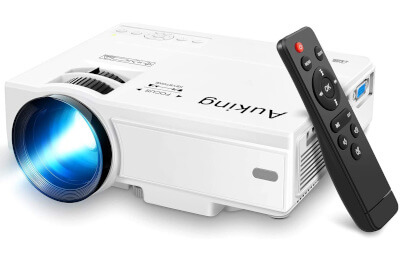 I mentioned that this projector sits near the top of the best sellers list on Amazon. I suspect this is due to the usability and performance you get out of the machine at this price point. This model has a lot of connectivity options that allow you to plug-in a massive range of devices. For any gamers, this projector supports modern video game consoles that utilize HDMI. This includes PS4, PS5, Xbox, Nintendo Switch, and more. There’s also a composite video input if you love playing older consoles as well.

Cinephiles can hookup their Blu-ray players and favorite media streaming devices via the HDMI port. This allows you to easily create an authentic home theater experience. Do you love watching things on Netflix, Hulu, and HBO Max? Pairing a device with apps extends the functionality of the projector even further. 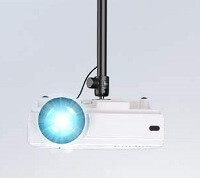 To top all that off, the company also says they offer a two-year warranty and “lifetime after-sales service”. At least when this article is being written. I assume the “service” is customer support for any questions or issues you may have with using the projector. Just give them a contact and presumably they’ll be able to sort everything out for you. It should definitely help give you some peace of mind knowing you’ll have a warranty and customer support for awhile.

One of the most important points when choosing which projector to buy is the brightness power. The AuKing mini projector is an LED-based model. This technology differs from traditional lightbulb varieties in a few ways. Firstly, the lamp life of the AuKing is much longer, lasting up to 55,000 hours. Typical lightbulb projectors tend to last 1/5th that long or less.

The main drawback of an LED-based projector is that they’re just not as bright as regular lightbulb machines. This means you’ll need to be in darker rooms in order to comfortably watch something. If you mostly plan to use your projector in a dark room, it shouldn’t be as much of an issue for many people. You may be able to have a dim lamp on but any projected image will look its best the darker the room is. The actual brightness rating is 7500 “lux” lumens according to the description provided by the AuKing company. Watch the following short promo video of this model to see a few more details.

I’d say the biggest benefit is that you won’t have to buy replacement lamps with an LED-based projector. In contrast, once a lightbulb goes out on a traditional lightbulb projector, it may cost you a few hundred dollars to buy a new lamp. So there’s some cost savings getting an LED model.

The contrast ratio is a term directly related to color vibrancy. Having a projector with a high contrast rating will give you rich looking images with a wider range of tones and colors. It’s often calculated by comparing the two colors: black and white. Specifically, the ratio can indicate the difference between the brightness of white, to the brightness of black.

On the AuKing mini projector you have a contrast rating of 2,000:1 which is pretty average. I’ll put that number into some perspective though. A typical movie theater has a contrast ratio of only 500:1. Be aware, contrast can sometimes be a case of bigger isn’t “always” better. Some LED projectors oversaturate their images with a super high contrast. Overall I think you’ll see some good colors under ideal viewing conditions, especially if you’re familiar with seeing movies in the theater.

The most versatile connectivity you’ll be using on a projector is likely the HDMI port. Practically all modern media devices use this input in order to output video and audio. The AuKing mini projector has a single HDMI port that can be used with your favorite game consoles or movie playing gadgets. If you have something that uses HDMI you should be good to go right out of the box. 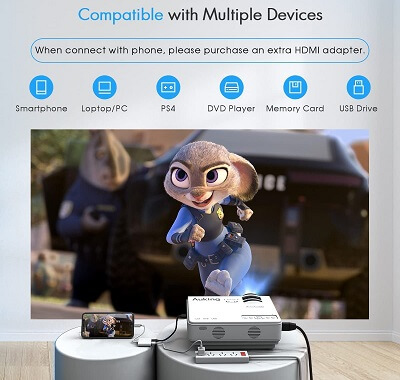 Though, an important thing to note, these cheaper projectors tend not to support Dolby audio. To fix this on streaming sticks you just need to change your audio settings on your device (not the projector) from “Dolby” to instead “PCM” or “Stereo”. Then you should have audio coming through. This is a copyright issue as they simply don’t have the licensing necessary to support it. Hence why these projectors are lower cost. You can still have audio, but it does require a setting change.

Also note, you cannot play Netflix, Hulu, HBO Max, or similar apps by screen sharing from your smartphone or tablet. This is a thing on most projectors because of the apps themselves having copyright protection. To watch a streaming service you need to use a Roku, Amazon Fire TV stick, Apple TV, or game console that has apps.

On the other end of the spectrum there’s also support for several legacy media devices via the Composite/AV input. If you have older TV appliances that use those older red, white, and yellow cables you’ll be able to plug it in here. I don’t see too many people using this port but it’s great to have if you love playing retro video games or watching old VHS tapes or DVDs. It’s always better to have a projector with more connectivity options.

There’s also a USB port and an SD card slot. These can typically be used to display photos and videos. The company says the projector can playback certain video formats right from a USB flash drive. However, after doing some research, it seems like the video support can be a bit hit or miss. It would probably be easier to just connect a laptop via the HDMI to playback videos directly.

Finally, there’s a VGA port that can be used with older computers that use this. It could be a nice way to create a media center from an old computer. Most new desktops and laptops use HDMI though so you’re better off using that. This may be one of the most unused ports but again, it’s nice to have for anyone that wants it.

The first thing you’ll wanna do when you set your projector up is adjust the alignment and focus. Please note that this model doesn’t have a horizontal alignment. This means the projector will have to be directly parallel to your wall or projection screen. There is a vertical alignment though which can help make the picture squared off and not distorted. 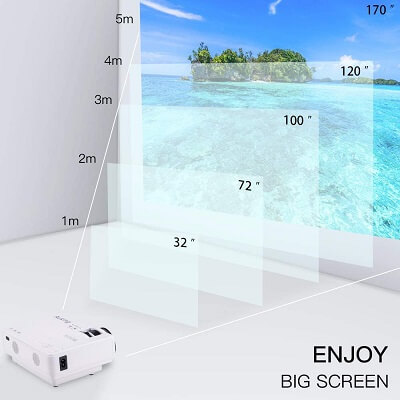 I don’t think there’s much to say about the focus feature. You’ll adjust this until your picture appears its sharpest. Just make sure you adjust these settings every time you move the projector as the requirements will change. Some people aren’t aware that most projectors require you to align and focus the image. Make sure you do these steps for the best viewing experience.

Sound quality usually isn’t a projector’s strongest area due to the limited internal space. There are speakers equipped that do an okay job outputting audio, but you may want to consider plugging in external speakers. There are a few ways you can do this. The easiest is using the 3.5mm audio port. This is the same port used for wired headphones. If you have computer speakers or something just plug them in here and enjoy instantly improved sound.

Aside from that route you could also consider getting an audio extractor. They’re usually around $30 or so. This will automatically split audio into multiple ports for you to use. Do you have a home sound system that uses red and white audio channels? With an audio extractor device you’ll really have more options for sound output. I think some even support Dolby audio and HDCP so maybe those specific ones could get around certain limitations of the projector. 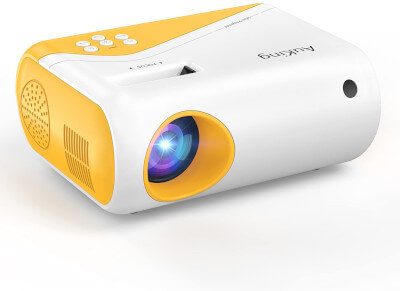 The company does offer another projector model with the same “mini” name. However, its moniker is W6, while the one I’ve been talking about is the M8-F. So the W6 is: less bright, has a drop in contrast ratio, lacks an SD card slot, and no keystone correction. It does cost less but I’d probably recommend against it. You’d be better off getting the M8-F for the improvements. Unless you really just want to test out what it’s like having a beginner “first” projector.

The AuKing mini projector seems to be a decent starting point for projectors. It comes equipped with an HDMI port which will allow you to hookup most of your favorite media devices. The performance is typical for the price range its in. If you plan on using the projector at night or in a dark room I think you’ll have a nice experience. It’s easy to plug in some external speakers to give you a home theater experience. 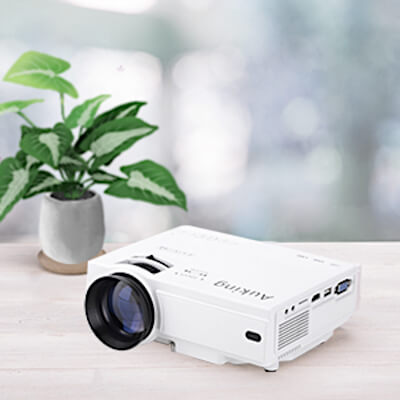 After doing some research, I found the AuKing company state in an Amazon FAQ that this model has a resolution of 720p, but a lot of people state that it’s only 480p. Regardless, it’ll still support 1080p but internally it’s running at likely 800×480 then. So it won’t be quite as crisp as a true 1080p model, that’s something you’ll have to keep in mind. To get a native 1080p projector you’re definitely spending more than what this one costs anyway.

You’ll have to take these pros and cons and figure out if this projector model offers enough at this price point. You can definitely spend more to get something with better features, but that’s how most purchases are. How much do you want to spend? What features are important to you? Does the AuKing mini projector check most of your boxes? It may be a decent starting point if you don’t want to spend a lot of money but want to make a home theater.

If you’re looking for the latest product information and newest running offers, click the following buttons and links below. Be sure to check near the price info for any discounts you can apply via a coupon checkbox. I’d recommend you add the projector to your shopping cart to see a total cost.

There are several alternative projectors you could maybe consider. Here’s a link to the TMY V08 projector which has a native 720p resolution, the same connectivity, and includes a free 100″ projection screen.