The DBPower L21 projector is a compact LED system that can support 1080p content and is compatible with a huge range of devices. You can run the newest gadgets, from media sticks to gaming consoles, along with older equipment due to the sheer number of ports available. These systems are very functional machines that provide a great starting point if you’ve never owned a projector before. 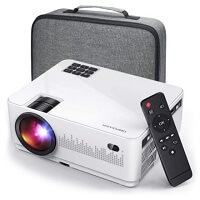 Since this model utilizes an LED light source, the lamp life is staggeringly high, up to 50,000 hours. A standard projector has regular light bulbs that usually need to be replaced every couple of years, depending on the frequency of use. It’s just one of the benefits of buying an LED-based model. This sounds like we’re off to a good start, but what are the downsides or things you should be aware of? We can talk a bit more about the lamp technology being used and continue reviewing the rest of the details from there.

Having a projector with a high enough brightness will allow you to use it more often during the day. The L21 model has been upgraded and now provides a very adequate 6,000 lux lumens, which the company claims is around 200 ANSI lumens. These two types of luminance ratings differ in their calculation, but overall you should be able to use this projector in many circumstances. In fact, this 200 ANSI brightness rating matches the popular Anker Nebula Apollo and Capsule II models. Lots of people seem to love those devices and they cost several times more than the L21.

Traditional projectors that use powerful light bulbs tend to be brighter but have a big drawback of lamp life. Getting a new projector and then needing to buy pricey replacement bulbs every few years isn’t something most people find appealing. The LED light source found in the L21 on the other hand can last up to 50,000 hours. Doing some quick math, that’s equivalent to using it 8 hours every day for 17 years straight. I’m sure the projector technology will be on a whole other level by then. They’ve already advanced a lot in just the past 5 years.

There are two terms to be aware of when talking about a projector’s resolution: native resolution and supported resolution. These actually mean two different things but manufacturers don’t tell people that, likely because of marketing factors. To put it simply, supported resolution is what the projector can take in from another media device. Anything that runs in an HD resolution will work and the machine will accept a 1080p source. Take a look at the following video to see an overview of the model.

Native resolution is the true resolution that the projector is capable of displaying. It may take a 1080p source but internally it’s running at a lower resolution. The L21 hardware runs at a 1280×720 resolution. This means it won’t look as crisp as a native 1080p model, such as the RD828 model in comparison. However, it will indeed look sharper than alternatives that only run at 480p.

I would suggest you get a projector that has at least a native 720p resolution like the L21. As you’d expect, all of the varying models that go from 720p to 1080p are typically priced accordingly. If you see something priced around $100 and under, it’s likely a 720p or 480p machine. Anything from $150 and up is usually natively 1080p. But you’ll need to check the exact specifications to make sure.

Color quality and vibrancy is linked to a projector’s contrast ratio. Generally, the higher the ratio, the brighter and richer your colors will appear. The actual meaning can be summed up as being a comparison between the colors white and black. So, the L-21 has a rating of 3,000:1, that means the color white is 3000 times brighter than the color black. At least according to how the company tested the machine. I’d say it’s a pretty average rating compared to alternatives, but it’ll look fine to many people and about what you’d expect.

The contrast is important with all types of media and it’s something you’d immediately notice the quality of. With a high contrast, colors will pop off of the screen, while dark colors won’t look as washed out. This will also come into play if you have ambient light in your room, as that outside light can reduce the appearance of colors and make them look faded.

It’s nice having the right amount of ports and connectivity on your projector. The machine by itself is useless if you can’t hookup all of your favorite devices, right? Here’s where there’s a bit of a surprise with the L21, it actually contains 2 HDMI ports. You don’t usually see this on 720p machines so it may be a reason for choosing this over an alternative. Having multiple HDMI ports will let you leave more things plugged in at once. If you’re unfamiliar with what HDMI is, it’s what almost every new tech gadget uses. Streaming media sticks like Roku and more will work here, all types of new video game systems, and your Blu-ray player or modern cable/satellite box. If it has an HDMI cord it should work here.

You also have 1 USB port and an SD card slot. These can be used to display photos in a slideshow fashion or playback videos. Throw your new vacation pics or a few movies onto a USB flash drive or SD card and the projector can display them natively. Just be aware that it’ll only support flash drives and SD cards that are up to 32GB and formatted in FAT32 I believe. Not every file format is compatible but it’s a great addition to an already versatile product.

Most people probably want to use their projector with something like an Amazon Fire TV stick to play Netflix, Hulu, and more. The device will work totally fine with those, or your favorite game systems. But what about older compatibility? It could be fun plugging in older game consoles, or using a device that doesn’t have HDMI. That’s where the included Composite/AV port shines. This uses an adapter that splits into three colors: white, red, and yellow. You may be familiar with these cables and was mostly used in the 90s and 00s. Maybe you have an old collection of movies on tape or want to plug in a Nintendo GameCube for a retro gaming day. You’d be able to do that via the Composite/AV port.

The final input available to talk about is an ancient VGA port. I don’t think the majority of people will have a use for this, but it’s here for anyone that does. Most modern computers and laptops use HDMI now and this is the predecessor to that. If you have an old computer that’s compatible you could use it to mirror your desktop for games, movies, or whatever else.

When you setup your new projector, you’ll need to take a few initial steps to make everything look its best. The first is adjusting the keystone dial, which angles the image vertically against the wall. If you have the projector on the floor or mounted on the ceiling you’ll likely need to adjust the angle of the machine.

After that alignment step, you’ll need to rotate the focus dial to sharpen the picture. Think of it like a telescope that sees different levels of sharpness depending on the distance. When the projector is close to the wall it’ll have a different focus position than when it’s further away from the wall. If you move your machine to a new location, remember to take these two steps again.

There are dual 3-watt speakers found inside the L21 projector. They’ll do a fine job pumping out audio to fill a decent sized room. Most speakers lack in this area because of the limited internal space. No matter how good they are, they won’t be as good as an external dedicated speaker system. Thankfully you have a lot of options for expanding the sound quality here. 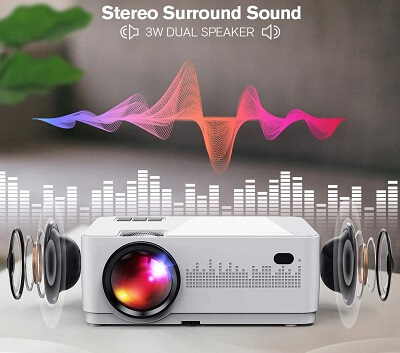 You can use the classic 3.5m audio port which can take in headphones or speakers. Maybe you already have a sound bar that you can plug one of these cables into. You’d be instantly ready to go. Aside from that it gets a bit trickier. You can get additional devices, either an audio extractor or a Bluetooth transmitter. The audio extractor will split the HDMI signal so you can use more forms of audio out. The Bluetooth transmitter will allow for wireless headphones or speakers to be paired with the machine.

Well, the DBPower L21 offers some admirable performance while also providing extensive compatibility with your media devices. If you’re a cinephile or a gamer you’ll love being able to see your favorite movies or video games displayed on a huge screen. This projector is a convenient way to create an affordable home theater that you can enjoy by yourself or with friends and family. You’d even be able to take the projector outside at night to watch movies on the side of your house, white blanket, or some sort of projection screen. Just run a power cord out to wherever you want, bring some external speakers, and you’ll have the perfect outdoor movie spot. Plus, with the included carrying case it’ll be easy to transport the projector around without it getting damaged.

I should also reiterate that the lamp life can last up to 50K hours, much longer than a traditional projector. Presumably you’ll be able to enjoy using the projector for several years this way, without needing to buy pricey replacement light bulbs. The DBPower company states that if you register your machine within 7 days of receiving it, you’ll get a 3-year warranty and a free exclusive gift to use. This is at the time of writing this article and may change in the future. I’ll also mention that this model uses a dual fan design which they claim makes it quieter than other basic LED projectors. Look over the features and decide whether it’s missing anything essential to you. If you’re in the market for a projector it’s definitely a solid choice among many alternatives. Another close model from the same company you could consider is the RD820.

So you’ve read everything and you’re interested in seeing the newest prices and deals? Click the links below to check the product page. I highly recommend you add the projector into your cart in order to see a final price, after any coupons are applied and tax.