The DBPower L23 projector is similar to some alternatives but does have a few interesting features that help it stand apart. Upon reviewing the specifications, it appears that it’s a very competitive LED-based projector, based on the performance. There are several reasons for choosing an LED projector, one of which is the 50,000+ hour lamp life. A typical projector has lightbulbs that sometimes only last 5K~ hours before needing to be replaced. I’ll talk more about that below. 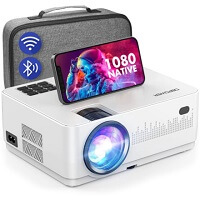 Perhaps this is the first projector you’ve discovered and you simply want to know more about it. Alternatively, maybe you’ve clicked through dozens of products and now you’re going crazy with no clue what projector to get. Which camp are you in? I’m sure you have a few questions and hopefully you’ll find your answers here; like, what is the difference between supported and native resolutions? Did you know that there is a difference? I’ll begin covering the resolution first and then explain subsequent aspects.

The resolution rating will decide how sharp your projected image will be. A higher number means the projector renders more pixels, and having more pixels means it’s capable of showing more detail. This is especially important with projectors because the screen size can be so much larger than a regular television. 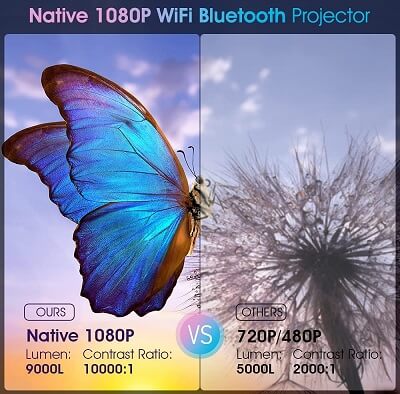 This DBPower L23 model produces a “native” 1080p picture, which is also known as 1920×1080 resolution. If you’re going to be using your projector to view a lot of HD movies and playing the latest video games, I’d suggest you lean towards getting a native 1080p model. Watch out for projectors that only say supported resolution and not specifically the words native resolution. This typically means the projector actually renders at a lower resolution and will not be as sharp in comparison.

Another factor for having a clear picture from a projector requires you to adjust a few settings. The focus wheel works like a telescope and is a physical piece that you rotate left and right. This allows you to pinpoint the sharpness of the image depending on how far away your projector is sitting. When placed near your wall, a projector will have a different focus position than when it’s on the opposite side of the room. Keep this in mind when moving your projector around.

The keystone correction is something you can use to align the picture to your wall. If you have your projector mounted on your ceiling or off-center you’ll use this feature to correct the image alignment. If this setting wasn’t here you’d be watching content on a worthless trapezoid instead of a captivating rectangle.

Ambient light is a projector’s nemesis. Every single model will look it’s best in dark cave-like conditions. This is regardless of the light source whether it be LED, traditional, lasers, or something else. Light has to travel from the machine to the wall or projection screen. Some people may not be aware that these aren’t as bright as regular TV’s. I’m sure you’ve been in a movie theater before though. The more ambient light there is, the less vibrant the picture will be. Check out this quick YouTube video to see the projector in action.

This DBPower L23 model outputs 9,000 “lux lumens” according to the DBPower company. That’s a touch more than their popular Q6 model, 12.5% more to be exact, though they actually seem quite similar. Projectors that utilize an LED lamp generally also aren’t quite as bright as a traditional lightbulb projector. LED models are usually a chunk cheaper and their light source lasts far longer at 50,000~ hours, instead of only 6,000~ for the EX3280 for example, which also retails for around $500 or so… 2-3 times the price.

If this is your first projector and you understand your expectations, you may be pleasantly surprised by the L23. It’s still plenty bright in my opinion with minor ambient light in your room. You can take it outside at night and play movies for your family. There’s enough brightness for many situations.

Color quality is linked to the contrast ratio. This rating is the range from the color white and the color black. The L23 has a ratio rating of 10,000:1, which will help provide colors that look saturated and dynamic. This also means darker colors will be deeper instead of appearing faded or hazy. Having a higher contrast ratio is also beneficial if you watch a lot of animated movies. Colors will tend to pop out more and be more defined.

Everyone’s essential cable input is called HDMI, the majority of people are familiar with this. If you have a streaming device like a Roku HD or Amazon Fire TV stick you’ll be using these with the HDMI. This is also where you can plug in your Nintendo Switch, PS5, or Xbox Series S/X consoles. You’ll also be happy to know that there are dual HDMI inputs included for connectivity. Having two of these HDMI ports will help reduce the amount of device swapping. 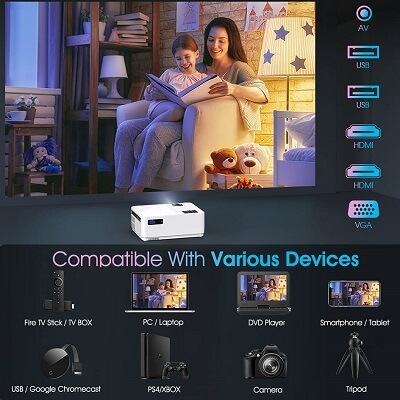 You also have two USB ports that can be used to power your TV streaming sticks or play video files directly. That’s right, you can load movies onto a flash drive and the projector can play them back natively. Not every video format is supported, but it’s definitely a handy feature. Imagine keeping an entire movie collection available at all times. I do think the maximum size of the flash drive is 32GB and it must be FAT-formatted though, but I’ve also read that people have used hard drives to store even more content.

There are some additional inputs offered to further extend the capabilities of the DBPower L23 projector. The VGA port can be used with older computers for presentations or similar sharing. It’s a bit outdated, since most people will use the HDMI ports with their computer, but it’s convenient for anyone that might use it. It’s always better to have something and not need it, than to need it and not have it.

To round everything off you have an A/V input, which is for classic gaming consoles or any other device that uses those red, white, and yellow cables. Does anyone remember those, or am I just a chunk of coal? Having the A/V means you can plug-in an old DVD player or experience your ancient video games in a new way. Interested in 4-player Mario Kart 64 on your wall?

Wireless functionality allows you to stream your smartphone or tablet directly to the projector over WiFi. You can similarly mirror your device by using an additional cable, but then you’re tethered to your machine. It can be fun during parties when you have people visiting and want to share content. Some projectors also allow you to update over WiFi for updates and improved stability. 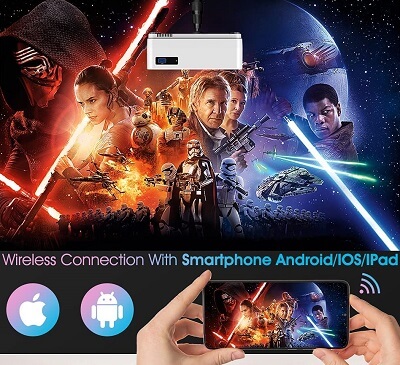 I wouldn’t recommend mirroring video apps like Netflix, Disney+, or Hulu. The apps block themselves from being shared for copyright reasons. You should use a Roku stick or Amazon Fire TV if you want to use those video apps without issues. You will be able to mirror games, photos, your own videos, and other apps though.

This model is also Bluetooth capable, so you’ll be able to pair Bluetooth headphones like Apple AirPods. Alternatively, you can connect standalone Bluetooth speakers to further enhance the audio quality. Be aware, if you use video apps, you may have to turn off Dolby Audio in the settings of your media device if you’re having audio issues. In order to use Bluetooth make sure it’s turned on in the menu, it’s called “BT Setting” under the sound tab.

There are dual 3-watt speakers with an SRS sound system installed in the DBPower L23. The SRS stands for “sound retrieval system” and is a 3D audio processing technology. This will help provide rich audio for your movies and games. If you’d like to extend the audio capabilities you can either utilize the 3.5mm audio jack with an external soundbar or buy an accessory called an audio extractor. This will let you pass the audio out via HDMI, SPDIF, and analog RCA. 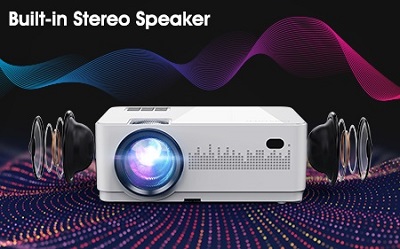 When using an audio extractor, remember that you may have to turn off Dolby Audio in your device settings if you have any audio issues. There are some audio extractors that can decode Dolby Audio but you’ll need to check the specifications to confirm which one you need. I’d recommend the J-Tech Digital audio extractor brand. 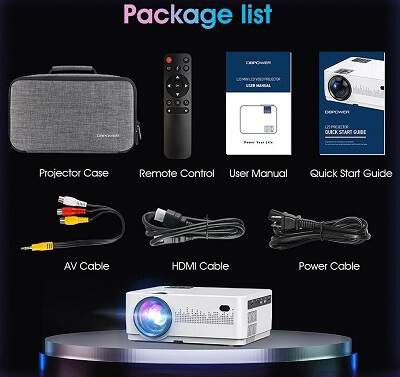 You can clearly see that there’s a lot to like about the DBPower L23 projector. It has some super convenient features and supports a huge range of media devices. You’re able to hookup the latest gaming consoles, newest streaming video sticks, yet it still supports older content like DVD and VHS players. The performance of the projector is also quite good for an LED-based model. You’ll be able to use the machine in several types of situations.

If you’re trying to decide if this model is right for you I’d suggest asking yourself where and how you’ll be using your projector. Does this model have the right connectivity that you’re looking for? Is the performance enough for you? Hopefully you feel a bit more well-informed and you’ll be able to narrow down your choices. It could be a great way to jump into the projector world at a reasonable cost.

There are links below that will take you to the latest offers and deals currently running. Sometimes the company offers coupons for an additional discount. You should be sure to add the projector into your shopping cart so you can see a full total price.