The DBPower RD-820 projector is a native 720p model that supports 1080p content. It’s powered by some impressive technical specifications and offers extensive connectivity. You’ll be able to use this machine to watch the latest movies and play the newest video games. The brightness and contrast ratings are about what you’d expect in this range, perhaps they’re a bit on the high-end.

If you’ve never owned a projector before, these LED-powered models provide you with a ton of functionality. They can be a great alternative to traditional projectors, which can cost well above twice as much. I recommend them as a super convenient way to setup your home theater. I haven’t even mentioned the fact that LED models have lamps that last up to 50K hours. That’s approaching 10 times the lifespan of a traditional projector’s light. Are you interested in knowing whether this is a good model for you? Let’s start by reviewing the picture quality aspect.

This term is very important in determining the quality of the projected image. The RD820 model can display a contrast ratio of 3,800:1. I’d say that this is overall a very solid rating and comparable to other native 720p projectors. Colors on this model will appear more vibrant and have nicer tones to them, especially compared to a lesser model that only offers a 2000:1 ratio in comparison.

I should also mention that many movie theaters across the country only produce a contrast ratio of 500:1. That’s probably shockingly lower than you expected. If you’ve been happy with the visual quality at a movie theater you’ll likely be very pleased with the experience from this projector under similar viewing conditions. Watch this quick visual demo to see the model working.

Projectors are affected by ambient light much more than a regular television set. Your flat panel TV uses a light source directly adjacent to its LCD display which allows for easy daylight viewing. When a projector shines across a room it’s a much greater distance and any ambient light can diffuse the picture. Some projector light sources are brighter than others and some common types are LED, traditional bulbs, and lasers. 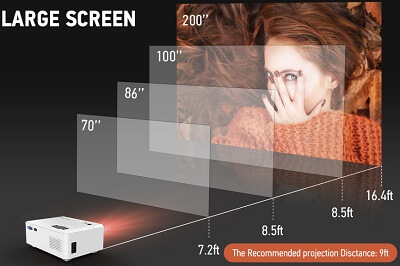 This model pumps out 5,500 Lux lumens which is a decent amount actually. The DBPower company stated on an alternative model that 6K Lux was around 200 ANSI lumens, so I assume this may be near that. You’ll see the best picture when it’s nighttime but should be able to have a small amount of light on at the same time. The popular Anker Capsule only has 100 ANSI lumens and people seem to really like that so it’ll come down to each individual. I think most people will be totally fine with it.

So the DBPower RD-820 has some good visual performance and is quite capable. But what type of devices can you use with the projector? The answer is mostly everything due to the types of ports offered. There is an SD card slot and 2 USB inputs, one of which can run 5V of power.

These inputs can be used to playback video files from a memory card or stick. All you’ll need to do is transfer the videos over and the machine can play them natively. It’s a nice idea if you plan on watching movies outside at night since you can have a movie collection easily accessible.

You also have 1 HDMI input that can be used for all your modern appliances. Do you have a Roku stick, Fire TV, a modern cable or satellite box, or maybe even a new gaming system? These will all work with the projector so you can watch all of your video apps like Netflix, Hulu and more.

It can be fun plugging in older media devices into your projector to experience them in a new way. Thankfully there’s an included AV/Composite port to view these older devices. This input is also known as RCA and utilizes a 3-colored cable for things like DVD players and older gaming systems. I wouldn’t say it’s an essential input but it’s convenient that it’s installed here for people that might use it.

Then we can round everything off with a blue VGA input for older desktops and laptops. Technically you could hook in your old computer to transform the projector into a media spot. Just be aware that VGA doesn’t carry audio information, so you’ll need to use the audio out port in tandem. Newer computers use HDMI but I guess it’s better to have a port and not need it, than need a port and not have it.

The RD-820 model “supports” 1080p content but internally it runs at a resolution of 1280×720. This is still HD but it won’t be quite as sharp as a native 1080p machine. I guess overall it can look a bit softer in appearance, but if sharpness is important to you I’d recommend checking out the L23 or Q6 models. Both of those are true 1080p devices.

I think for the options in this range the mini RD820 can definitely hold its own and has perfectly capable image quality. It’ll be noticeably sharper than a native 480p model allowing you to see more detail. I usually recommend a 720p as the standard minimum you want to consider.

When you get your new projector please make sure to remove the lens cap before trying to use it. Some models have clear lens caps and I’ve seen a few people that don’t even notice them. After that step, you should adjust the keystone settings to align the picture to your screen or wall.

The final step requires you to rotate the focus knob to sharpen the image. These steps need to be taken whenever you move your projector as the focus is dependent on the distance to your screen or wall. They’re simple to do and don’t take much effort or time to do but this will help you get the best picture quality possible.

Since there’s limited space in projectors, most don’t have enough internal space for extraordinary speakers. After all, they still require room for a cooling system and airflow to keep things from overheating. The RD820 does come equipped with an adequate 3-watt HiFi stereo speaker. This will blast enough loudness for music and audio from movies or games but it is possible to extend the capabilities further. 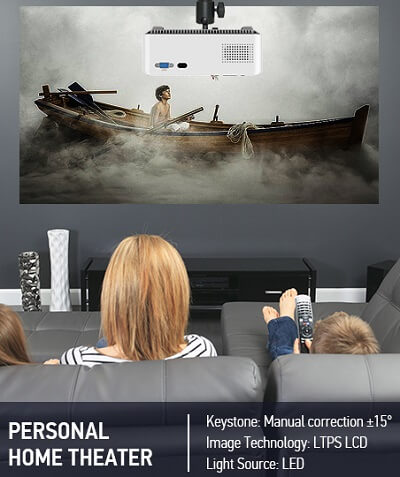 The most obvious and easiest solution is the audio out port. If you have some old computer speakers laying around or a TV sound bar that takes in a 3.5mm auxiliary cable, you’ll immediately be ready to go. You could also get a device called an audio extractor to pass audio through to other outputs.

There isn’t any Bluetooth built-in but you could buy a Bluetooth transmitter, which will use the 3.5mm port and the 5V USB port together. This will give you wireless audio capabilities if you have Bluetooth headphones or speakers. Just be aware that if you have sound issues you might have to turn of Dolby Digital audio in your device’s settings.

The DBPower RD-820 mini projector gives you really nice visual performance while also allowing a ton of connectivity choices. As far as native 720p projectors go this is definitely on the higher end in terms of overall package. You can have a screen size from 40″ all the way up to 200″ depending on the distance. Since it’s an LED powered model, with a lamp life up to 50K hours, you also won’t have to worry about needing to replace the bulb all the time. That could be an additional expense that could quickly add up. 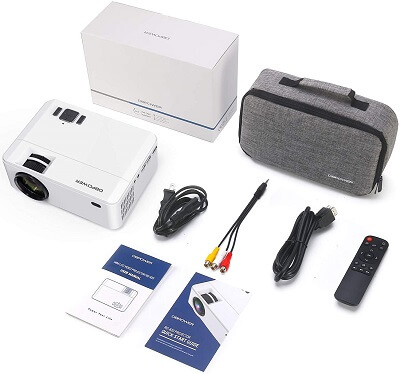 There are a lot of ways you can use the projector. Imagine watching movies or playing video games on a screen that’s over 100 inches. I’ve seen some people have used it to trace static images onto a wall or poster board for some arts and crafts action. It’s a solid first projector choice that supports a lot of media devices while displaying a very decent picture. An alternative model would be the L21, which is actually very similar in many ways but includes 2 HDMI instead of only one. Either way, the RD820 is definitely something to consider for anyone looking to take their first steps into the world of projectors.

Review the following offers below and click on the links to see the latest prices. The company occasionally has coupons that you can apply before purchasing on Amazon. Make sure you add the projector into your shopping basket to see a complete cost.