The DBPower RD828 projector seems to be a solid choice when looking at its specifications and price point. There are obviously many alternatives in this price range though, so your question now is probably whether it’s the best model for you. These “more affordable” projectors utilize an LED light source, which provides up to 50K-100K hours of use. This means you won’t need to constantly be buying replacement light bulbs every few years. That’s a pretty positive benefit for most people. 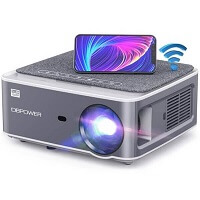 If you’ve been reading the descriptions of projectors you’ll likely have seen a flurry of terms being thrown around. Simply reading these terms by themselves isn’t helpful at all for many people. You may be trying to compare projectors but not know what’s better, or even what to look for to compare. I’ll break these tech terms down and try to review them as best I can. For anyone else that already knows what each specification means, I’ll also be giving all of that information out as well.

This DB Power projector I’m writing about is a true 1080p machine. You can find a lot of projectors under $100 that say they “support” 1080p. This sounds nice but it’s not the entire truth. The term you actually want to look for is called native resolution and will be the term that tells you the true resolution of the projector. When a projector simply supports 1080p it’s usually running at a lower resolution internally. Even a 480p projector can support 1080p media.

So, what’s wrong with this or what does it actually mean? Resolution is a major factor that dictates the clarity of your image. A lower resolution image will appear blurrier compared to a high resolution image. If you watch a lot of high-definition movies or play modern video games it’s recommended to choose a 1080p projector. Visual details will standout making things easier to see. Watch the short YouTube video below to see a quick overview.

Here’s another important factor when choosing the perfect projector for yourself. A machine that offers a higher brightness output will allow you to use the projector in more situations. Maybe you want to have a movie night outside or shine a movie on your enclosed porch. The higher the brightness the better you’ll be able to see what’s being displayed.

This 828 model is capable of outputting up to 9,500 lux lumens. It’s typically enough for viewing media while there’s some ambient light. Obviously you’ll still see the best picture quality when it’s as dark as possible. This is the nature of how projectors work. But it’s nice having some flexibility with your machine.

While contrast isn’t quite as important as other specifications, it still helps determine your picture quality. Generally, the higher your contrast ratio is, the more vibrant and striking colors you’ll see in your image. This DBPower RD-828 model has a rating of 10,000:1 which is pretty high. It’ll be really nice for animations or movies with vivid imagery. 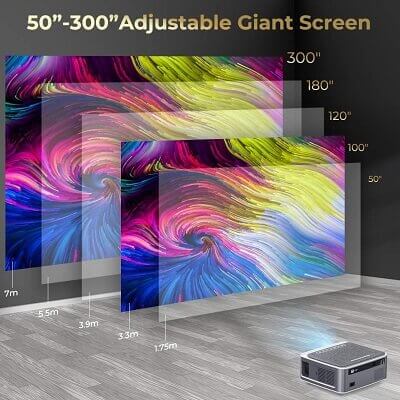 In order to get the clearest image possible you’ll need to adjust two very important settings. The first being the “keystone”, which basically just aligns the image perfectly to your wall. You can do this for all 4 corners of the image in fact to really fine-tune the picture. After doing that you’ll want to turn your attention to the focus wheel. This wheel works exactly as you’d expect and you can sharpen the image until it’s as nice and crisp as possible.

I should also mention that there’s an additional feature on this specific model that allows you to shrink your image up to 50%. You may be asking, why would anyone need to do that? Well, the further away you place your projector, the larger the image will be. So being able to shrink the picture will help ensure everything visually fits on your screen or wall. The throw distance will give you a 100″ screen at 10 feet away, while at 18 feet you’ll have a 180″ screen.

It’s great having a projector with solid performance for an LED-based projector. But you also need to be able to use your favorite devices with the DBPower RD828 as well. For connectivity, you have 2x HDMI ports which will probably be used for 90%+ of your media. This is the port for your Fire Stick/Roku, the latest gaming consoles, and more. Having multiple HDMI ports means you won’t have to be swapping cables as frequently as well. 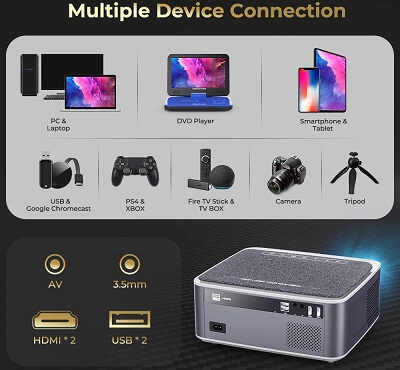 There’s also an A/V port that can be used to enjoy older media such as VHS tapes or DVD discs. It’s a great addition that expands the projector’s versatility. If you like the idea of playing old home movies on your wall, or using your vast collection of outdated media, you’ll be able to do that with this model.

Finally, you have 2x USB ports available to power your TV streaming sticks. I also believe they can be used to playback movies directly from USB flash drives; however, the drive needs to be FAT-formatted and only supports up to 32GB. The amount of connectivity options here is super beneficial to consumers that want to get the most out of their projector.

By having WiFi built into this model you’re able to wirelessly share the screen on your smart device. Let’s say you have photos, self-shot movies, or games that you want to share with other people in the room. You can easily connect to the projector, without the need of any additional cables, and mirror your phone or tablet to accomplish that. It’s a handy feature that can get some use when you have friends over and want to share content together. 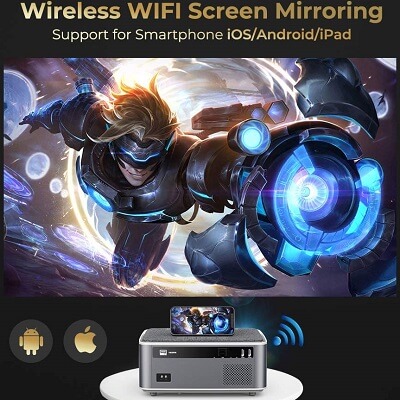 One important thing to note is that I believe all projectors have “HDCP” built-in. This is a copyright protection which prevents you from sharing movies from apps on your phone or tablet such as Netflix and Disney+. If you plan on watching movies from those services you’ll need to plug in a media device into the projector like an Amazon Fire TV or Roku stick. Your favorite streaming service will work fine when using one of these, it’s only when you try to share your smart device screen that video content may be blocked.

The description for the DBPower RD828 projector states that there’s Bluetooth connectivity as well but this isn’t the case. If you want to get Bluetooth functionality you’ll need to get a Bluetooth transmitter or something. So, be aware that you won’t be able to wirelessly connect Bluetooth speakers automatically with this one.

Projectors aren’t known for having outstanding audio quality because of their small size and limited internal space. I’ve seen many others that have dual 3-watt speakers, which is decent, but this DB Power projector exceeds them by containing a dual 5-watt speaker system. This will do a fine job filling a room with audio from your favorite movies or video games. 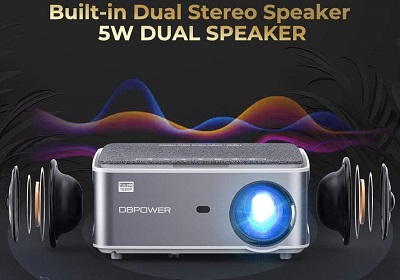 If you want to extend the audio capabilities even further there’s a 3.5mm AUX port to plug in external speakers. You can also look into getting a device called an “audio extractor” which will split an HDMI signal to give you more ports like S/PDIF, Coaxial, and L/R. Depending on the brand and model they’re usually around $25-40 for some of them.

The technical performance and versatility of the DBPower RD828 projector make it seem like a solid buying choice for many people. There are a ton of connectivity options available so you can use the majority of your current media devices with the machine. You could consider using a power extension cable and take the projector outside to have an outdoor movie night with friends and family. Just be sure to always readjust the keystone and focus settings whenever you move the projector to a new location. 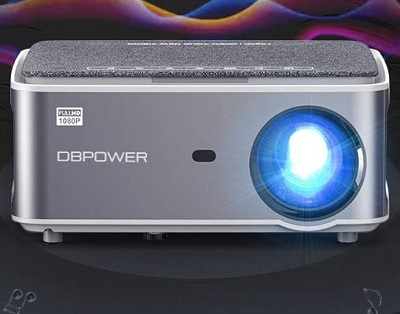 If you’re looking for a true 1080p projector and you want it to be an LED-based model with a long-lasting lamp life, this is a pretty good option. Look over the specs and decide whether it has the features that you personally want.

If you’ve never owned a projector before be aware that they aren’t as bright as a television. Think of it more as creating your own home movie theater and less as a TV replacement. Also make sure to register your unit with the manufacturer in order to receive the warranty, I think you have 30 days to do that. If you’d like to consider alternative models read about the DBPower L23 and DBPower Q6, both of which are also native 1080p.

Check out the links below to see if there are any coupons available to apply on Amazon. You can find these located near the price information on the product page. Refer to the coupon image for an example of the location. I recommend adding the product directly into your shopping cart in order to view a total price after any taxes or coupons are applied.