The DR J Professional projector is very popular it seems and was upgraded in 2020 and now again for 2021. The previous version had a native resolution of 840×480, while this successor provides 1280×720 internal resolution. However, the DrJ projector does still support 1080p sources, which I’ll talk more about below as that may get confusing. The brightness has also been improved making the machine more versatile in low-light situations. On top of that the company has now released a newer native 1080p model with even further improved specifications. 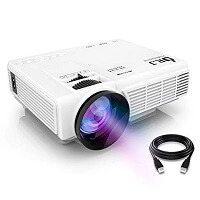 Looking online there are a few different models that don’t have a very clear naming convention. There’s the HI-04, L8, P68, AK-30, and AK-40 that I’ve found. What does this mean though? Is there a specific one you should be looking for or one that’s more improved than another? Those are some important questions we’ll have to cover so you’re more well-informed. I’ll try to describe everything and give explanations as often as possible so the information is easy to understand. Let’s begin with the resolution as that’s one of the major improvements and then move through everything else.

Obviously resolution is one of the top factors when choosing a projector with brightness being another important point to consider. The resolution rating will determine how clear or blurry your image will appear when it’s displayed. You have to be cautious though, many projectors can support 1080p input from a source but can’t display it natively without downscaling the image. The most essential spec to take notice of is “native resolution”, look for that when reading descriptions. This rating is the internal “real” resolution that a projector will display at.

There’s been an upgrade to both native 720p and 1080p depending on the model you choose, which will give the projector a jump in clarity over the previous 480p rating. This means that games will look sharper so you’ll be able to see details easier and movies will have an overall sharper look to them. This may not be as important to some people depending on what they’re using the projector for. But typically having a clearer picture is a really great visual benefit. If you’re a gamer or avid movie watcher, definitely go for something that has 720p or 1080p when choosing one of these. Watch the short video below for a visual example.

The brightness aspect can hugely affect when you can, and cannot, use the machine. The higher the brightness the more situations you’ll be able to enjoy using it. If you plan on using the device with additional lights in your room or sunlight from outside you’ll want the brightest projector you can get. The rating on the Dr J projector is between 3,800 and 8,500 lux lumens, depending on the model, which should allow you to make use of the device in several different lighting cases. Not everyone wants to be restricted to enjoying their machine in a dark cave, unless you’re Batman and actually have a cave, I suppose?

Contrast ratio is the range between the color white and the color black. The higher this rating is the more deeply saturated the image will be. Colors will pop off the screen and you’ll see an overall striking visual range compared to a projector with a low contrast ratio. The AK-30 and AK-40 models offer up an 10,000:1 ratio which gives you a vivid appearance, especially for animations or colorful video games.

Update June 29th 2022: Today’s Deal: Check out this latest Amazon offer before leaving the site! This is the Dr J native 1080p AK-50 model with 10,000:1 contrast ratio, 8500:1 brightness rating, and includes a 120″ projection screen. I’d recommend adding the DrJ projector into your cart so you can view a total price including any coupons that are applied.

Now let’s go over what you can plug into the projector as that’s another big deal, right? I think most people will be mainly plugging in their modern devices with this, and you’ll be doing that via the “HDMI” port. If you plan on using an Amazon Fire Stick, Roku stick, or some other streaming device you’ll be golden here. This is also what you’ll use if you want to play on modern video game systems such as the PS4, Nintendo Switch, or Xbox One. If you’re looking at buying a projector, definitely make sure it has one or two of these HDMI ports on it. 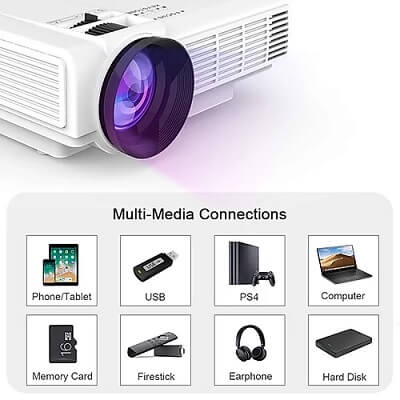 It’s also nice being able to play videos without the need of additional bulky machines or something that requires internet access. Thankfully, there is a USB port and an SD card slot you can use to plug in either flash drives or SD cards filled with videos for offline playback. This is super convenient if you want to watch movies outdoors for example. Just transfer your videos over and insert it into the projector for easy movie watching. Both the AK-30 and AK-40 models have two USB ports instead of only one found on the other models.

What about if you want to bust out your huge collection of ancient VHS tapes or play some console games from the 90s that don’t support HDMI? Well, you’re actually in luck because of the included AV/Composite port. You’re probably familiar with this white, red, and yellow cable from long ago. This legacy support is a great addition to the overall value prospect of the machine. Having a projector is something to enjoy and play around with; the more devices it supports the more flexibility you’ll have.

To close off the connectivity section you have a blue VGA port that can be used for a “video-only” input from a computer. Older desktop computers and even some laptops used this port to allow you to show presentations or screen share your system. There isn’t any audio information carried over this port so you’ll likely need to use the 3.5mm/AUX port in tandem with it. I don’t think there will be a lot of people that end up using this port but it’s great that it’s included for people that need it. Just another reason why this projector is so versatile.

There are dual internal speakers installed that provide stereo audio while you’re using the DrJ professional projector. This will provide enough loudness for many scenarios and it’s great to have a built-in speaker setup in the box for convenience. Just don’t expect deep bass or a movie theater experience. The box is too small to house large speakers for a rumbling system like that.

If you really want to upgrade the sound aspect you’ll need to plug in external speakers via the 3.5mm/AUX input. Maybe you have a sound bar paired with your television already or some nice computer speakers you can use. It’s as simple as plugging in the audio cable from those and making your room shake. Do you consider yourself an audiophile or a cinephile? If so, you’ll probably want to look into an improved audio setup.

You can see that there’s a lot to like about the Dr J Professional projectors. The overall performance can provide you with an authentic cinema feeling right in your own home. Being able to hook it up outside and have an outdoor movie event for your family is another huge plus in my opinion. Pair it with a sound bar to complete the entire experience. You can see why it’s so popular once you look over the specifications and features. The connectivity support for instance is very thorough; you’ll be able to plug in almost any device from VHS players to Netflix streaming sticks. 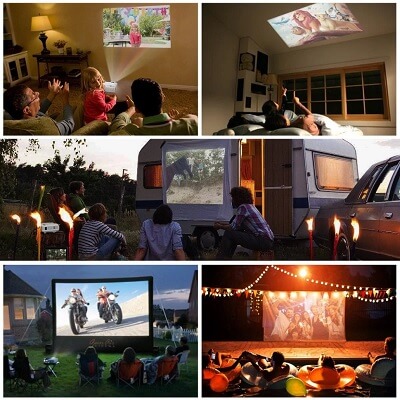 Now the real question is whether this projector is right for you, and if so, which model you should buy. Because of the extensive ports included I think any of the models would fit your needs and wants, since you’ll basically be able to plug in anything. So, here are a few questions you can ask yourself to narrow down your choice. Do you plan on using the DrJ professional projector outside or when there’s ambient light around? If that’s the case you should get the brightest “lumens” rated model.

Will you be using the projector very frequently? Then it may be worth the extra cost of getting either the AK-30 or AK-40 native 1080p models. The AK30 pumps out 7500 lux lumens and has a 10,000:1 contrast ratio while the AK40 provides 8500 lux lumens and the same 10,000 contrast rating. If you just want something simple to jump into using a projector for the first time, consider the P68 model. You’ll have to decide how often you plan on using the machine, what situations you’ll be using it in, and whether you need the “best” picture quality possible among these choices.

If you’re searching around for the best prices and deals, review the Amazon links below for the latest updates. The company does offer coupons occasionally and prices can fluctuate often so I’d recommend adding the item to your shopping cart to see a total. This will ensure you see a final cost including fees and any coupons available. Look near the price information to find and apply any coupons that are available.