The Fangor 701 projector provides a nice balance between performance and versatility. This model is considered somewhat of a step above the popular F506 and F405 models by having improvements in a few technical areas. The lamp life, for example, supposedly lasts up to an impressive 100K hours. There’s also better contrast and brightness performance in the F701, according to the company. 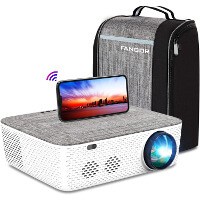 This all sounds pretty good so far, but are any of the improvements actually worth the extra cost? I assume you have a dozen choices you’re considering at this very moment. Do you want to know whether the F-701 is the perfect choice for you? Everyone is looking for something a little different, so it’s important to get something that has the right features and performance you want. I’ll try to review all of the confusing specifications and explain everything clearly. Hopefully having more knowledge will help with making your decision.

Having wireless functionality built into a projector gives you the ability to cast content from your phone or tablet. To put it simply, this feature mirrors your screen, so whatever happens on your device will be displayed by your projector. Some apps block themselves from being mirrored because of copyrighted material. It can be fun to use with family and friends though to show each other content on your device.

This projector comes equipped with a native 1080p processing chip and optics. That means you’ll be accurately seeing full HD content displayed in 1920×1080 resolution. It’ll be noticeably sharper than a 480p projector in comparison. If you want to see a sharp image, this is an essential specification to consider. Check out the following YouTube video I found for an example of the visual quality.

Having a projector that produces a clear image is one of the most important things to many consumers. However, when shopping around for a projector, you may see the information saying the model merely “supports 1080p”. Don’t fall for this wording trap. When searching for a projector, always look for the term native resolution. This is the real rating of every projector.

Let’s say you get your new projector home and have the perfect location to set it. You turn it on and the projected image looks blurry and wonky. But, silly you, don’t start worrying. You need to adjust the focus and keystone wheels in order to fine-tune the sharpness and image alignment.

There’s likely quite a few people that forget about this step and it has to be done every time you move the projector to a new location. Thankfully it’s really easy to use, just rotate the wheels left or right until the image is in focus and aligned to your wall.

I should also mention that the F701 model has the ability to shrink the projected image up to 50% smaller. This is actually pretty handy. If you set your projector down and the image is too big to fit your wall or screen, you would normally have to physically place your machine further or closer to the wall. Having a zoom function allows you to do this digitally while keeping your projector in place. There are many projectors that don’t have this feature. 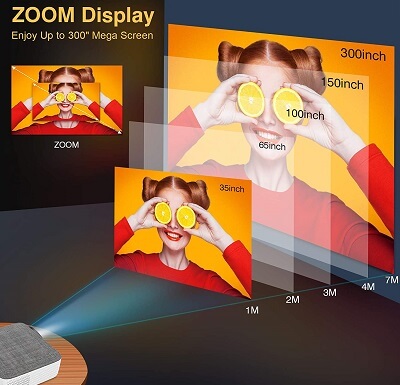 The F-701 model is rated at 8,500 lux lumens, which is actually pretty good against competing brands. Having a brighter projector will allow you to use it more often. The F506 and F405 models are rated at 6,500 and 7,500 lux lumens respectively. According to the Fangor company, the Fangor 701 is 340 ANSI lumens. This would put it around or above the popular higher-end Anker Nebula Capsules. For the price range it hits a decent sweet spot for performance.

Due to these Fangor models being based on LED technology, you wouldn’t have to worry about buying pricey replacement light bulbs as well. This can be a really appealing factor to consider when choosing one of these types of LED models. A light bulb for a regular projector can cost up to several hundred dollars and only last 10K hours of use or less. But they have the benefit of being a chunk brighter as a trade-off so it’s all something to be aware of.

Be aware that ambient light can affect a projector’s colors so easily due to how the lighting system works. Hence why cinemas darken their entire rooms to provide you with the best possible picture.

It’s nice having solid brightness and image performance, but the next important piece are the connectivity options. What good is a projector if you can’t plug your devices into it? For starters, the 701 model comes equipped with two HDMI inputs. You’ll likely be using these inputs more than any other port. It’s here that you’ll plug in your Blu-ray player, favorite modern gaming console, streaming media sticks, and HDMI-capable cable box. It’s super convenient having two of these inputs so you won’t have to swap devices as frequently.

The next input is known as AV, RCA, and Composite video. This port utilizes those old yellow, red, and white cables you have stashed in your storage. Having this RCA input allows you to enjoy older media content such as DVD/VHS and older gaming consoles. If you love having nostalgic retro days or maybe even watching some old home movies, this could be a fun way to enjoy that older content. 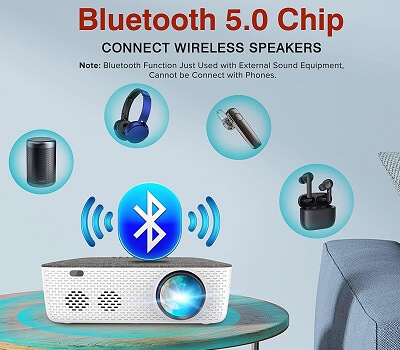 Since projectors are relatively small, there isn’t much internal space for large speakers. Sometimes models only have one speaker, while others have two smaller ones. The F701 splits the difference and contains two 5-watt speakers. This is a pretty good size for this range and will be able to fill a room with decent sounding audio. However, if you want an even better experience there is an auxiliary 3.5mm port where you can plug in external speakers.

The Fangor 701 projector seems to check a lot of boxes for performance and features. The brightness, contrast ratio, and native full HD resolution all work together to provide a pleasing image. Not to mention the lamp life is supposed to last up to 100K hours thanks to the LED technology. So you won’t have to constantly be needing to buy expensive light bulbs every few years. Though to reiterate, traditional bulb projectors can be quite brighter, so that’s a trade-off you’ll have to decide on. 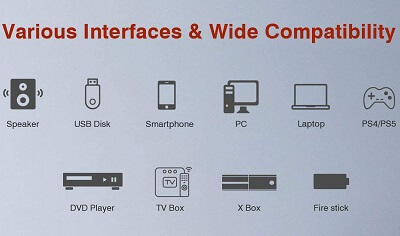 You have a great amount of connectivity options here. With two HDMI ports you won’t have to swap media devices nearly as frequently as a projector with only one HDMI port. The RCA port is perfect for enjoying older content from family videos to classic gaming consoles. To round things off, the Micro SD slot is a super convenient way to store a video collection on your machine.

Overall, there’s a lot to like here compared to some alternative options you may have. Ask yourself what features are most important to you and hopefully you can narrow down your decision. I’d probably suggest you get the Fangor F506 instead, as it costs less and still gives you a ton of functionality. You could also consider another brand like the WiMiUS K8 as an alternative. That WiMiUS model should be brighter and with similar features.

Assuming you’re looking for the latest offers as well, I’d suggest visiting the following Amazon links below to see the newest prices. Sometimes the Fangor company offers coupons you can apply on the product page to receive an additional discount. Be on the lookout for those! I’d also recommend adding the item to your shopping cart in order to see a complete total cost.