The Fangor F405 projector contains a whole slew of impressive specs and features to review. There are a ton of connectivity ports at your disposal, so you’ll be able to plug in practically any media device you have. This model also provides a native 1920×1080 resolution, giving you a true full HD picture. On the functionality side of things, there’s a really cool wireless screen sharing capability. This feature allows you to screencast your smart devices directly to the projector without the need of any wired cables. If you love sharing content from your phone to your friends and family this might be a reason to consider this model over alternatives. 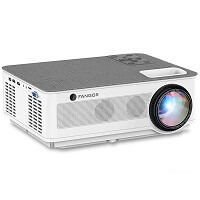 Choosing which projector to buy can be a real challenge, especially when there are so many choices. Plus, everyone has different needs and requirements. Is it going to be used strictly for a weekly family movie night or do you want to use it daily? Would you like to play movies outdoors during the evening? I’ll attempt to explain what every technical specification and feature means below. The goal is to make everything easier to understand so you actually know what to look for when choosing the right model for yourself. I can begin by going over the wireless features and then ramble from there.

Having WiFi built into your projector allows you to do a few various things. Being able to update your projector, run preinstalled apps, but the most common of these things is wireless screen sharing. This is a really convenient way to mirror the screen from your tablet or phone. Imagine you have friends, it’s unlikely but this is a mental exercise, and you invite these so-called friends over to your house. Anyone with a smartphone or tablet would be able to connect to the projector and mirror their photos, movies, and other apps. It can be a lot of fun during social gatherings such as family holidays or birthdays. 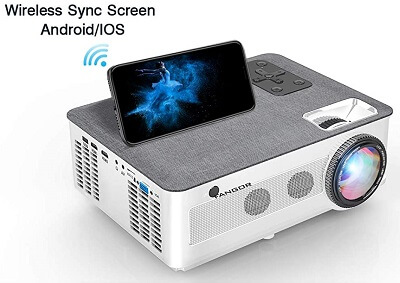 Not everyone cares about this type of feature but it’s nice to have just in case the occasion arises. If you spend a lot of time on your phone or tablet you might as well see everything displayed on your entire wall. Though I should point out that many movie/TV companies block the ability to mirror their video apps. I believe YouTube typically works but something like Netflix or Hulu won’t. You’ll have to use those apps from an Amazon Fire TV Stick or similar device. The quality would be much better anyway so it isn’t a huge deal. But it’s definitely something to mention.

The F405 projector also offers Bluetooth 5.0 support. With this you can sync a wireless speaker to the machine to extend its audio capabilities. Similarly, you can connect Bluetooth headphones to the projector so you won’t bother anyone else in your house. It really helps make this model feel even more versatile. If you have a wireless soundbar or some sort of Bluetooth audio device you’ll be able to use most of them right away.

Here’s where things can get a bit complicated. There are two terms to be aware of, supported resolution and native resolution. I don’t want you to get fooled by companies saying their projector only “supports 1080p”. You’re much too precious to be fooled like this. Saying that they support 1080p doesn’t always mean that the hardware is rendering a true 1080p image. They get to claim this because the projector will accept incoming 1080p media sources. They’ll be running at a lower resolution, like 480p or 720p. 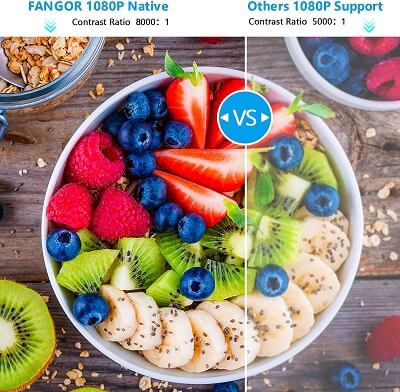 With a native 1080p model you’ll get a picture that is sharper and show more detail compared to one with a lower resolution. Look for the term “native” resolution when you want to find out what a projector is actually providing. Thankfully, this Fangor model is a true 1080p machine with a native resolution of 1920×1080.

The Fangor F405 does accept 4K content, so it is capable of running 4K media from your latest modern devices. Just be aware obviously it’ll be rendering at a lower internal resolution than true 4K. Still, it’s nice to know that you could still playback 4K content with this model. If you have a PlayStation 5 or Xbox Series S/X console for example, they would both also be compatible.

Once you receive your fancy new projector you’ll need to find the perfect place to set it. But you won’t be completely ready to enjoy using it until you’ve adjusted the focus and keystone dials. You’ll find these two dials on top of the machine near the lens area. As you can imagine, the focus dial is the easiest to understand, as this will sharpen the overall image. All you’ll have to do is turn it left or right until everything appears as clear as possible. There isn’t a zoom function on this model, so you’ll need to physically move your projector to expand and shrink the image.

The keystone dial looks very similar and will help you angle the image to your wall. If you place your projector near the floor you may not see a perfectly aligned screen since it’ll be pointing up towards the wall. Adjusting the keystone will quickly resolve this issue by tilting the image correctly. Making these two adjustments is an essential thing to do every time you place your projector in a new spot. I should mention that the F405 does come with a 120″ projection screen. It’s a nice addition if you’re sitting there wondering where you’ll shine your projector onto.

Now brightness is probably the number one specification that will determine when and where you can use your projector. The Fangor F-405 pumps out 7500 lux lumens according to the company. This should be a high enough brightness for you to either have a dim light on or use it during the day with the blinds closed. You’ll even be able to drag the projector outside once it gets dark and watch some movies there. Essentially, you’ll be able to use the machine when there’s some minor ambient lighting. For the best results, you’ll want to make your area as dark as possible though.

I think contrast is a much more mysterious specification but it’s actually very simple. At its core it’s just the range between the colors white and black. However, this rating will determine the overall quality of the picture’s colors. The higher this rating is, the better and more vibrant colors you’ll have. This model has an impressive ratio of 8000:1, which is on the upper-end for these types of projectors. You’ll notice this difference on all sorts of content including animations and video games, if you happen to be a gamer or have someone in your family that is. 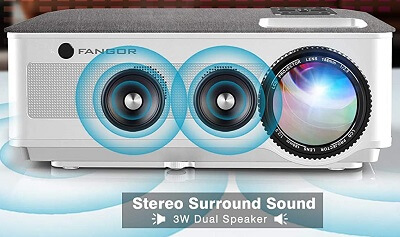 There’s a dual stereo speaker setup here providing 3-watts of audio power. They do a fine job filling a room with music and vocals from your media. I’d say they’re better than some alternatives since others are either a single speaker system or lower wattage. If audio is really important to you you’ll likely want to utilize external speakers anyway. You can accomplish this by using either the audio out port or wirelessly via Bluetooth.

Maybe you already have some computer speakers with a 3.5mm aux cable or even a sound bar from your TV. A helpful tip, if you’re having problems not hearing audio from Netflix or similar service, try turning off Dolby audio in the settings. This can happen because of copyright or licensing issues.

I mentioned that you can plug almost any media device into the projector. This is due to the variety of ports located on the side of the machine. There are two HDMI inputs to use with your streaming sticks and boxes. Modern video game consoles also utilize this port. Honestly, it’s probably the port that most people are familiar with. Having two of these ports is super convenient since you can leave more things hooked up at once. Some projectors only offer a single HDMI port, meaning you’d have to swap things more frequently. 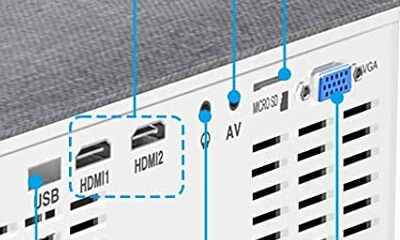 You also have a USB port and Micro SD slot available. Typically you can load your own video files onto a USB memory stick or Micro SD card and play them back right on the projector. They don’t usually support every advanced file format but it can be really handy. If you want to watch something outside you wouldn’t need to worry about the WiFi signal reaching or having to drag an extra piece of equipment out there.

The AV port will allow you to enjoy media from older types of devices. You could have a DVD player plugged in to keep younger kids occupied. For nostalgic gamers, how about some classic game consoles from the late 90s or early 2000s to have a fun retro gaming day? Being able to play classic games from the N64, PS2, or GameCube era would be awesome. The Fangor F405 would be a great way to experience those games in a completely new way.

Finally, there’s a VGA port for presentations or computer screen mirroring. It isn’t an input that’s likely to get much use by most people. But hey, who knows, maybe you’d like to use this for some sort of presentation with a computer that doesn’t have an HDMI port. It’s better to have something and not need it than need something you don’t have. Much like my love. Having all of these various ports should give you some sense of how versatile this Fangor projector is.

The Fangor F405 projector has a lot of positive things going for it based on specs and functionality. It provides true 1080p performance while offering solid brightness and contrast ratings. You’ll be able to plug in so many different types of devices into this projector, giving you a whole new way to view your favorite content. The addition of wireless mirroring for your smart devices and being able to sync Bluetooth speakers pushes this model up even more.

There are a few nice accessories included such as video cables, a remote, and even a 120″ projection screen to get you started. These can be really fun machines but you should be aware of a couple things. If you’ve never used a projector before, you should know that they don’t get nearly as bright as regular television sets. There is a reason why movie theaters are so dark. Still, being able to enjoy your media on a huge wall or the side of your house is a great feeling.

In the opening section I mentioned that every person has different needs in a projector. Does the F405 model suit you and check all of your boxes? Hopefully some terms and features are at least a bit clearer for you after reading this article. If this model isn’t quite what you want, or you want to consider a model that’s a step above this one, I’d suggest checking out the Fangor 701. There’s also the very similar Fangor F506 that you can read about, which does include a zoom function and offers comparable features.

Go ahead and visit the links found below to view the latest offers currently running. The Fangor company does occasionally provide coupons and discounts, so be sure to check for those. I would highly recommend that you add the projector model to your cart. This will allow you to see a complete cost after coupons or taxes. >> Click to check the latest price on Amazon.