Looking at maybe buying the LG PF50KA projector but need more information? Then you’re definitely in the right place because I’m about to ramble about this model below. The LG PF50KA, not only has a name that rolls off the tongue, but is also equipped with some pretty great technology. To summarize, it’s a smart projector with built-in apps, renders at 1080p resolution, and can playback video files from a USB flash drive. As for unique features, there’s also a digital TV tuner and a built-in battery, which lasts up to 2 1/2 hours according to LG. Does that sound appealing to you so far? 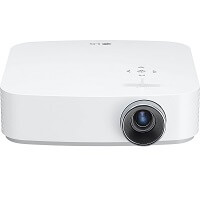 I was surprised to discover that this projector is an LED-based model rated at 600 ANSI lumens. This makes it at least twice as bright as many other options. A big reason for choosing an LED model is the incredibly lengthy lamp life. The lamp inside will last you up to 30,000 hours. If you used the LG mini projector for 20 hours a week, it could last up to 28.8 years. The added benefit? No need to buy expensive replacement bulbs every few years with the LG PF50KA model. We clearly have quite a bit to review and go over, so let’s start.

When using a projector you’re typically watching something on a screen that’s at least 80″ or larger. This means every pixel that’s being rendered is spread out over a much bigger area than a typical television set. That’s why having a projector capable of rendering a high resolution is so important. This model outputs a resolution of 1920×1080, that’s 2.1 million pixels. That’s 4 times the resolution of 720p, which means you’ll see far greater detail in your image that’s also sharper.

A low resolution tends to be blurrier or slightly out of focus in appearance. I’d recommend going for a 1080p model if you’re a big time cinephile or you enjoy playing the latest video games. Since games will benefit greatly from the higher resolution and additional clarity. Distant objects will be easier to see and textures will be more pronounced.

Another thing that affects visual quality is the contrast ratio. This rating has to do with the colors that are shown, and generally, the higher the number the better. However companies do use different types of measurements so it can be difficult to determine how they compare between models. The LG PF50KA has a contrast ratio of 100,000:1. This is a dynamic contrast ratio but the model seems to do a great job displaying vivid colors and correct tones. Watch the short YouTube video below to see a video demo.

If you’re the type of person that loves adjusting the image on TVs and monitors, you’ll be happy to know that there are several advanced picture tuning features as well. These include color management, tint, dynamic contrast, super resolution, edge enhancer, color filter, gamma, white balance, and more. There are also multiple preset modes to choose from, with a dedicated gaming mode for lower latency gameplay. So you’ll be able to fine-tune your image to get things just how you like it.

Setting Up Your Projector

Once you place the LG PF50KA projector in the perfect location and turn it on you’ll need to adjust the focus and keystone settings. The focus makes everything sharper if the image appears blurry. There is an included “focus test” setting that may help you with this. 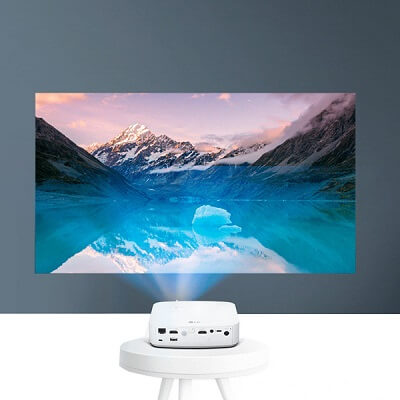 The keystone setting works automatically but can be turned off to be controlled manually. Be aware that there’s only a vertical keystone adjustment. This means the LG mini projector must be placed directly in front of wherever you want to project to, not angled to the left or right.

There’s wireless functionality that’s used for the built-in smart apps and also for screen mirroring. This feature allows you to mirror whatever you see on your smartphone, tablet, or Windows computer. Please note, only Android and Windows PCs are compatible with the screen sharing. The protocols it supports are Miracast and WiDi, which iOS devices don’t use.

Double note, because of copyright protection, video streaming apps are blocked when trying to stream them from your phone or tablet. But don’t worry, there is a smart operating system on the projector for many of those apps. Plus you can use a Roku or Amazon Fire TV if you prefer that interface.

Having smart features can be a nice convenience. The PF50KA has LG’s WebOS system installed which allows you to access certain apps and utilities. This includes Netflix, Hulu, and YouTube. Be aware that this isn’t an Android system so the selection of apps is more limited. Honestly, for watching your favorite video apps, you’ll probably want to plug in either an Apple TV or Roku type of device. They’re faster and a relatively cheap accessory to add.

For default apps you do have a photo player, movie player, music player, weather, and a web browser built into the projector. These are self-explanatory but the video player is the real highlight. This functionality allows you to play movies directly from a USB flash drive. This way you could leave a movie collection plugged into the machine at all times for easy access.

No one wants to hear a distracting hurricane fan blasting near you while you’re trying to watch a movie or play a video game. Thankfully the loudest this model gets is about 30 decibels. This is when the LG PF50KA projector is set to max brightness. That’s about the level of a whisper, which should be completely bearable for most people. In “normal” and ECO mode the sound is reduced even further to 24 and 23 decibels respectively.

Here’s a standout feature you won’t find on many other projectors, a built-in battery that can last up to 2 1/2 hours of playback time. This is when the projector is set to the maximum ECO mode to conserve power. If you want to have an outdoor movie night, this can be a super easy way to set everything up. 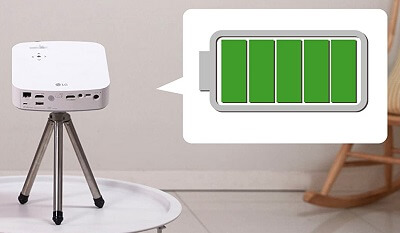 Really you just need to place the LG PF50KA outside, adjust the focus setting, and you’re good to go! Then if you have a USB flash drive with movies and shows loaded onto it you won’t even need any additional cords or a wireless signal. People that love camping also find this feature really appealing for obvious reasons. Overall it can be a great convenience if you plan on using your projector outside at all.

This is a pretty small projector, measuring in at only 6.7″ x 1.9″ x 6.7″ and weighing 2.1lbs. That doesn’t leave much room for large speakers, though the ones included seem to do a decent job pumping out audio. You’ll probably want to plug in some external speakers to complete your home theater experience. There are a few ways you can accomplish this.

The first, and probably easiest, is using the 3.5mm headphone jack to send audio to external speakers. If you want a wireless solution, you can pair either Bluetooth speakers or headphones to the LG PF50KA projector. Maybe you already have some sort of TV sound bar or Apple AirPods you can use. Now usually, Bluetooth has a slight delay, meaning sound won’t be completely in sync with the action you see. However, the LG PK50FA has the ability to adjust the audio delay to match the video. This feature is called AV Sync and can be found in the Bluetooth menu. Many cheaper LED projectors do not have this audio sync capability.

You have an interesting selection of input options available to use. On the far left is an Ethernet port, which will provide you with the fastest internet and the lowest latency for the built-in apps. Though you can also just connect it wirelessly to your router using either 2.4Ghz or 5Ghz bands.

There are 2 HDMI inputs on the LG PF50KA, with one of them supporting ARC. If you aren’t familiar with this term, it stands for Audio Return Channel. It allows audio to be sent both directions which is perfect for audio receivers and certain sound bars. Having 2 HDMI inputs will also help reduce device swapping since you can keep multiple things plugged in at a time.

Maybe you’ll want to dedicate one of the HDMI inputs for a Roku or Amazon Fire stick. Then the other HDMI could be used with your favorite gaming console such as the Nintendo Switch, PS5, or Xbox Series X/S.

It’s a bit of an odd addition, but there’s a digital TV tuner inside the LG PF50KA projector. This will let you connect some sort of digital antenna to watch local over-the-air TV shows. If you’re interested in picking up live local broadcasts, this feature is definitely for you.

That could actually be perfect for anyone camping or people that just want to watch live TV outside. This feature just really isn’t something you typically see on any projector, so it’s one of the few that offer this functionality.

I already mentioned there’s a USB port that can be used to playback video files from a flash drive or similar device. That allows you to easily have a movie collection available right on the projector without the need for internet or any additional devices. It’s especially convenient when using the projector outside at night. 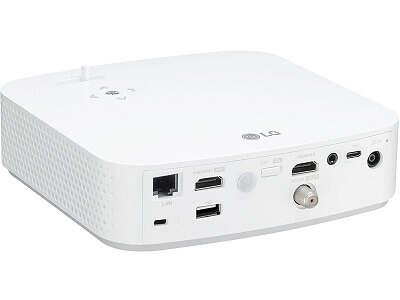 The USB-C port is a newer input that can actually be used to charge the LG PF50KA’s battery. That means you can use an external power bank in order to refill the battery while you’re outside or camping. It won’t be able to fully power the projector but some people have said it can extend the usage time. Just being able to charge it with a power bank will help keep it usable when you’re away from a true power source.

After reviewing all of the technical specifications and going over the features included, I think it’s clear that the LG PF50KA projector is a top-tier LED model. The brightness is 600 ANSI lumens with a lamp life that lasts up to 30K hours. That means you won’t have to be buying expensive replacement light bulbs. It isn’t the brightest projector available but this is a device you buy once with minimal maintenance. It’s also pretty energy efficient needing a max of just 65-watts of power. Many alternatives need 300 to 400-watts, so honestly you’ll be saving a bit of money over the long-term with a more energy efficient projector versus a power hungry one. It’s no wonder the fan is relatively quiet on this. 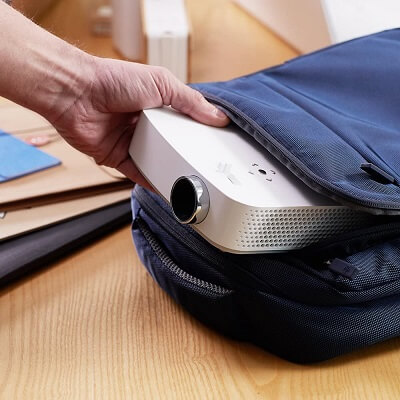 The fact that there’s also a battery that lasts up to 2 1/2 hours is a nice bonus. Not to mention all of the smart features and connectivity options available. You have access to several picture quality settings to fine-tune the image. There’s even a game mode that reduces latency for video games if you’re a gamer. This makes games feel more responsive and better to control. All of this performance is in a compact package measuring just 6.7″ x 1.9″ x 6.7″ and weighs slightly over 2 pounds. If you’re looking at buying a low maintenance projector with good performance, I’d definitely recommend considering the LG PF50KA. Be sure to visit the links below to see the latest up-to-date offers running on Amazon as they can change quite often.

Click the following links to see the current prices and offers available. I would suggest that you add the projector to your shopping cart to see a full total cost.