The Nebula Capsule projector is a portable model with handy smart features and versatile capabilities. There are actually 3 different variations to choose from and they each have unique specifications to consider. Determining which model is right for you might be more difficult than you’d probably like. Do you want something that has the max brightness? How about a newer Android version installed? Better battery life? These are a few questions you may be wondering about at the moment. 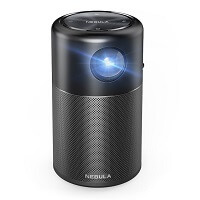 If you review the description and information between the models there may not be a clear winner. I’ll attempt to go over these projectors as much as possible and explain in detail what everything means. If you’re someone that already knows what the technical specs refer to, then I’ll also be laying out each of their differences as well. Hopefully all of this will make it easier for you to decide whether to purchase one of these or not.

One of the cool features with the Nebula Capsule is the fact that it has Android installed. This means you have smartphone functionality onboard and can use media apps to play Netflix, Hulu, among other services. Because of the wireless connectivity you can download their “Nebula Connect” app allowing you to control many aspects directly from your smartphone. This is a huge detail for the type of person that loves convenience and wants the flexibility.

The fact that it’s Android also means that apps can be updated to newer versions so you won’t be stuck with basic services or having things become outdated. With having apps such as Netflix available you also won’t need to carry around an additional media device in order to use streaming services. It basically makes the projector a self-contained media box. As for any other differences between the models you get either Android 7.1, 8.1, or 9.0 depending on whether you get the Capsule, Max, or II versions respectively. The original Capsule has 1GB of memory and 8GB of storage, while the Max has 2GB of memory and 16GB of storage. Watch the promotional video below to see a bit more of it in action.

There aren’t as many input ports available as some other options but it does come equipped with an HDMI port for the majority of appliances. Nowadays everything practically uses HDMI to display audio and video information. With this port you’ll be able to hook up all modern video game systems, Blu-ray players, streaming sticks such as Amazon Fire Stick or Roku, and modern laptops. This likely covers most of the things you’ll be using the projector for I imagine. 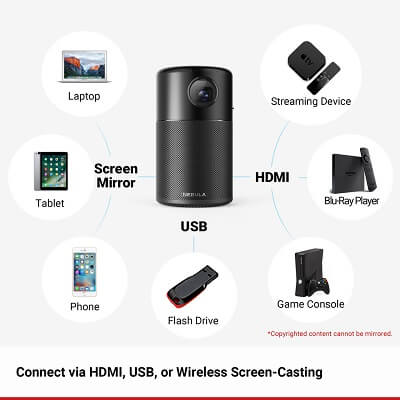 Additionally, you have a USB port included where you can plug in flash drives. You can playback video files directly from one of these giving you the ability to watch videos while not connected to the internet. Maybe you want to be outside and play a movie on a sheet or inflatable screen. You might have a great WiFi signal but for those that don’t your options are limited. You’d basically need a long extension cable and a Blu-ray player to watch anything. Thankfully you’ll just have to plug your USB flash drive in an load the movie or whatever up.

To close this section, all of the models offer Bluetooth and WiFi functionality. However, the Max/II models have an AUX port as well for extra audio connectivity I’ll talk more about below.

I mentioned that these were portable, but to further expand on that, they can also be battery powered. That’s right, they all have internal batteries! The regular Capsule model and the Max version has a battery life of up to 4 hours, while the Capsule 2 has a battery life up to 2 1/2 hours.

How about a scenario why this would matter. Let’s say you want to play a movie outside for friends or the neighbors; you’re going to need some pretty long power cables to provide power to your devices. Having a built-in battery allows you to play something without the need of any of that.

The machines do support 1080p sources but will scale them to either 854×480 or 1280×720 depending on the model. This is because of the system’s internal or “native” resolution. What this means is that you’ll have a slight drop from 1080p, down to 720p or 480p instead for content. Leaves on trees will appear a bit blurrier and other fine details could be lost for example. How much this matters to you will depend on how sharp of a picture you’d like. 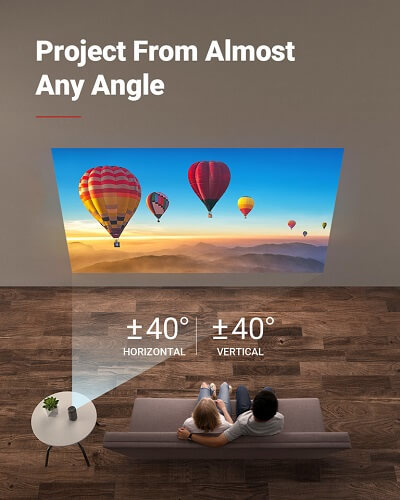 The original Nebula Capsule has an internal resolution of 854×480. The “Max” and “II” variations both offer 1280×720 as their native resolutions. It’s clearly not quite as sharp as what a native 1080p projector can produce. If you want the clearest picture you’ll need to search for something that offers “native” 1080p in the product description. If you enjoy playing video games I’d recommend getting at least a 720p machine to ensure your game isn’t too blurry to see enemies and details.

Another important aspect to consider when talking about picture quality is brightness. Having a bright projector will make everything easier to see under all lighting conditions. The official way to determine brightness is called an “ANSI” rating. This is a technical test that accurately rates the light produced. The standard Nebula Capsule model has a rating of 100 ANSI lm. The “II” and “Max” variations both have a rating of 200 ANSI lm. Obviously, that’s twice as much and will produce a brighter overall image.

If you plan on using your projector when there’s some light in your room, from lamps or something, you may want to go for the 200 ANSI lm models. However, if you’re just using this when you’re in a dark room you’d be fine either way. Having the flexibility of using your projector more frequently could be a nice benefit to think about. Here’s a short Game of Thrones clip from YouTube showcasing the brightness in a pitch black room.

I should also mention that these are all LED-based. This means that you won’t need to worry about constant maintenance having to replace light bulbs after 5,000 hours of use or something. In fact, the Anker company says that the original Nebula Capsule has a lamp life of 30,000 hours. If you used the machine for 3 hours every single day out of the year, the light would theoretically last 27 years. This is a device you’ll buy once and enjoy using for several years.

Most projectors have pretty weak speakers included but these seem to fair a bit better. Both the Max / II versions have an 8-watt speaker that projects audio out in a 270 degrees. The original model has a 5-watt speaker but pumps out sound in 360 degrees. Either way, with the standard Capsule you can use external speakers via Bluetooth. Just pair the device with a bigger Bluetooth speaker and you should be good to go. The Max / II models offer that same but you can also plug in external speakers or sound bar for even further improved quality via the AUX input.

If you plan on adding more capable audio you should probably get the ones with the AUX/3.5mm port. It would be a lot easier to add better sound and your speaker options grow with that choice pretty drastically. You might be fine with the built-in speaker but it’s something to think about when deciding.

Well, all three of the Anker Nebula Capsule models seem to provide a lot of functionality, especially for its class. Being a small “pico” projector has many benefits and is made with portability in mind. The portable factor makes it super convenient to carry between rooms. If you have kids they could set it up themselves since it’s an all-in-one type of device, thanks to the Android OS. No need to mess with cables and additional media appliances just to watch a movie. Or you could just load movies on a USB flash stick and carry your movies around with you.

This is made for someone that wants to use their projector wherever they are. Someone that wants a smart system with apps installed that can be updated. There are enough unique points for these but you’ll have to be the one to ultimately decide whether this fits your lifestyle. If you want something that’s even brighter(up to 500 ANSI) and has improved speakers, I’d suggest reading about the company’s other product the Anker Mars II / Pro, click that to read more details. It also has a battery and is still pretty portable, it even includes a handle. Hopefully you can narrow down your options and land on something you’re completely happy with.

Now you may also be searching around for current offers. Click the following links to view more product information and the latest deals that are running at the moment. You should add the product to your cart to see a total with any tax and whatnot.

"As an Amazon Associate I earn from qualifying purchases. This does not influence the content presented and helps keep the site running."