The TOPVISION T26 projector offers a native 1080p HD resolution, solid connectivity features, and impressive brightness/contrast specifications. But is there anything that really sets this projector apart from alternative choices you may be considering? Continue reading if you’re having some difficulties deciding on a projector and feel overwhelmed by all of the models available online. Maybe you aren’t even familiar with what certain terms mean or what’s considered “good”. 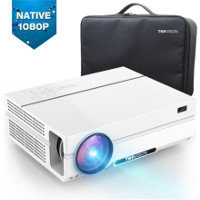 I’ll try to review the different aspects of the machine while explaining what each detail means to hopefully help you make a smarter decision. There are a lot of things to figure out here. Brightness is one of the most important points as that will determine when, where, and how you can use your projector. The connectivity is also imperative since that will determine what kind of devices will work with the model you choose. How about we just go right into the resolution information to start things off, shall we?

The clarity of your picture is tied to the resolution capabilities of the projector. The higher your resolution the sharper the image will look overall. You’ll need to pay attention to the phrase “native resolution” though and not just “supports 1080p”. These are actually two big different things. Having a projector that is native 1080p will be able to display every pixel from a Full HD source.

A projector that only “supports 1080p” likely renders internally at a lower resolution. This means that the image will appear blurrier in comparison. If you want the sharpest picture and plan on watching HD movies or playing modern video games I’d recommend getting a native 1080p model. I think you’ll be happier overall with the clearer image and being able to see more visual detail. This T26 model is a true native 1080p model that can display a Full HD image.

There are two sides to consider when choosing a projector for yourself. The first is the actual performance of the machine and the second is the type of inputs available. This connectivity will determine what you’ll be able to plug in and use with your fancy new toy. The most important input you’ll be utilizing are the two HDMI ports. It’s what nearly every modern appliance uses and has for several years. 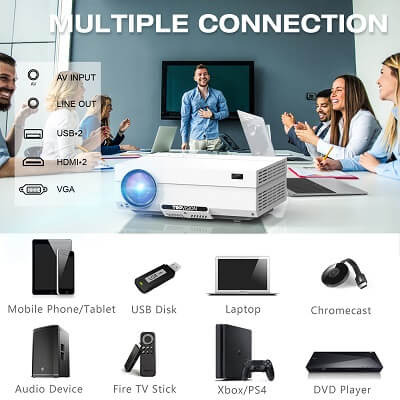 If you have a media stick that streams Netflix and other services you can plug it right into this projector. The HDMI port is also used with video game consoles if you happen to be a gamer and want to enjoy playing your favorite games on your wall. The fact that there are two HDMI ports is a nice bonus since you’ll have to swap devices much less frequently.

You also have two USB inputs in case you want to playback your own video files. It does support many popular video formats including AVI, MP4, and MKV. The compatibility will just depend on what encoding was used for the video. It’s a handy feature if you like the idea of having a collection of movies plugged into your projector at all times. If you plan on doing any outdoor projecting it might be a nice way to view your videos that way.

There is some older device support included as well. The AV input can be used to plug in old DVD players, and VCR players if you remember what those are. It’s a nice way to enjoy old content in a new way. Maybe you have some home videos on tape and have a VCR that supports composite/AV output. With this you could display them on one of your walls for friends or family. I think this is more of a novelty input but I’m sure there are certain types of people that will get a lot of use out of it. At least having the capability is a huge plus and allows your projector to handle a large variety of devices. 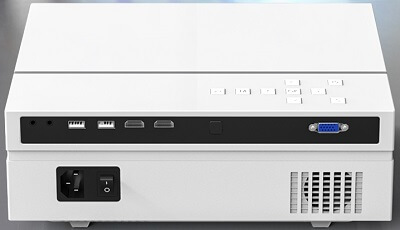 To round off the connectivity is the VGA port, which is an old computer video signal. If you have an old computer that uses this port you could technically just hook it up to this projector. However, VGA only handles video, so you would need an audio out cable working in tandem in order to get video and sound at the same time.

Speakers are usually somewhat of a weak point for most projectors due to the relatively limited space inside. To get the best audio quality you’ll definitely want to plug in external speakers via the 3.5mm Line Out, HDMI + SPDIF splitter, or perhaps run things through an audio receiver via HDMI. Having said that, the T26l model comes equipped with two 3-watt internal speakers that can give you stereo audio. If you’re looking to create your own home cinema then you may want to consider external speakers as an upgrade. A quick note, there’s no Dolby Audio support so you may need to set your Amazon Fire Stick to “stereo” sound in the settings for certain apps.

It’s obviously important to get a projector with a brightness high enough to work during the time of day you want to use it. Maybe you just want to create a home theater and watch movies once a week during the evening. Any projector will work best when there’s minimal light in your room. If you want to enjoy using your projector during the day or with a few dim lights on then you’ll need something with a solid brightness rating so you can see the picture clearly enough. 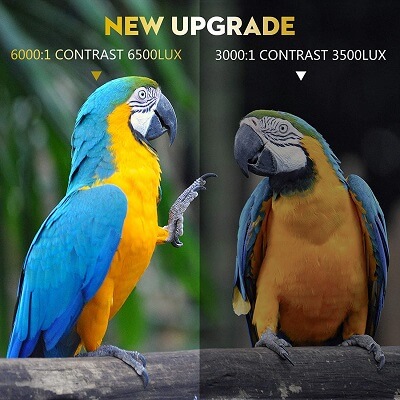 The T26 projector has a brightness rating of 6,500 lux lumens, which will be brighter than something that’s only 3,500 lux lumens for example. This means that the machine will be much more versatile and able to be used in many more instances. It would be a bit of a downer if you got a projector you could only use in a totally dark basement so it’s nice to have some flexibility here. It’s also important to note that the LED lamp lasts up to 80,000 hours of use.

To round off this section there’s also the term “contrast” we need to cover. This is how vivid and saturated your image will look versus appearing washed out and having grey tones. This model is rated at a 6,000:1 contrast ratio. It means you’ll see deeper colors and an overall more pleasing picture compared to a lower contrast machine.

The TOPVISION T26 projector will work with a wide range of your media devices, making it extremely versatile. You’ll be able to use it with modern machines as well as with older devices you may have laying around due to the connectivity options. It’s also a native 1080p projector that has a solid brightness and contrast rating, which will give you a sharp image with vivid colors. The clarity alone will be much higher than a projector that’s only capable of 480p internal resolution. Be sure to use the “focusing wheel” when you receive your projector to help focus the picture, as you’ll need to adjust this depending on the distance to the wall. 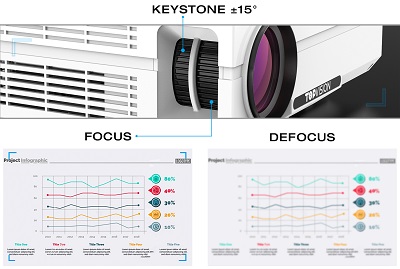 There are similar alternatives available but what perhaps helps set this model apart are the dual HDMI ports. Not every projector comes equipped with two of these ports and having dual ports will allow you to swap attached devices less frequently. Imagine if you only had one HDMI port and wanted to plug something else into the projector. You would need to unplug the old device and plug in the new one every single time.

I should also mention, according to the company, after you complete the warranty registration you’ll have “an extended 3 months to return and 24 months promise”. This should help give a bit of peace of mind that you’ll have a product that’s going to last for awhile. You’ll need to consider all of this information and decide whether this is the right projector model for you. Does it have the features and performance at the price you’re looking for? Good luck and welcome to the world of home cinema!

Go ahead and click the links below to view the most recent deal offers and prices on Amazon. Information and prices can fluctuate at a moment’s notice so I’d recommend adding the T26 projector into your shopping cart to see a total price and any changes that happen.

Update: This model doesn’t seem to be on Amazon at the moment. Click the following link to see the best selling home projectors on Amazon for a few popular alternatives!