The Vankyo Burger 101 mini projector is a very small device that has a built-in rechargeable battery that can last for up to 3 hours of playtime. This is a big draw for many people, and especially families, since you can literally play a movie anywhere you want. On top of that, there are also a few other unique features of the machine that you may be interested in. You have the ability to do wireless and wired screen sharing with your smartphone and tablet for instance. Another major point is that this model is capable of playing 3D movies via ‘Active Shutter’ glasses, which aren’t included. 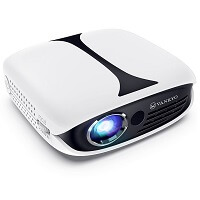 If you’re a fan of watching 3D movies and having that type of cinema experience in your own home, this could very well be your ideal projector. But with all of the choices you have, it can be quite daunting figuring out what to get. I’ll try to go over all of the functions of the device to help you make an informed decision. I’ll start with the battery system and then cover the 3D aspect as those are probably the two main reasons for getting this model.

Update: This model can no longer be found on Amazon. I’d recommend you consider either the popular Nebula Anker Capsule or the Kodak Luma as possible alternatives.

Built inside of the miniature machine is a 5200mAh rechargeable battery. This will allow the pico projector to run for up to 3 hours, though the brightness setting will affect the usage time. You should expect somewhere around 2 hours at 100% brightness. This functionality is really great if you want to play a movie outside and project it on a wall for friends and family. Or maybe you just want the kids to be occupied in another room for awhile. 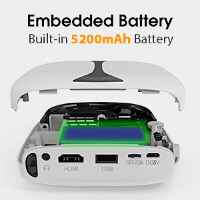 If you’re worried you’ll only be able to use the projector for a limited amount of time don’t worry. The projector will also run off of a wall power adapter, which is included. Having this flexibility between wall power and battery power will be able to cover a lot of different situations. Another model may not be quite as versatile with its portability factor. If you’re searching for something you can take anywhere, this is a huge detail you won’t want to overlook.

Watching 3D movies seems to have dropped in popularity these days. It’s a type of media that people either love or hate and it can be very divisive. They’re still making 3D content but it can be difficult finding a way to enjoy watching it. I think 3D TVs are mostly a thing of the past and many new models don’t support it.

If you love 3D movies you’ll be happy to know that the Vankyo Burger 101 projector actually supports playing 3D movies and other content. You’ll need to have ‘active shutter’ 3D glasses which you’ll need to either already have from a previous device or purchase as an additional accessory. You’ll also, of course, need to have a source for 3D content so a 3D Blu-ray player 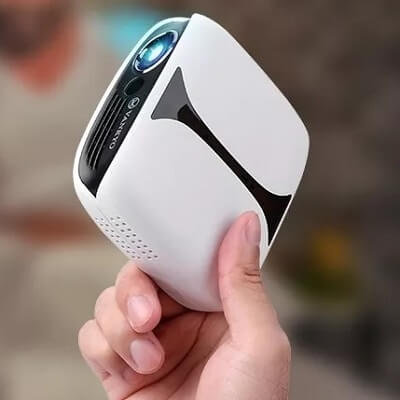 Image quality is an important factor when choosing the right projector. You’re making a few trade-offs when choosing a mini projector over a full-sized one, naturally. The native resolution is 854×480, which will appear a bit blurrier than a true 1080p machine. However, this model does support the input of 1080p content from Blu-ray players and modern video game consoles like the PS4. Just be aware that you won’t see every strand of hair or ultra detail in the image.

The contrast ratio is 2000:1 and that’s the rating that tells you how rich the colors will appear. The higher the rating the more saturation and deepness you’ll see from the color range. Overall it’s a decent amount and it’s recommended that you mostly use the projector in a dark room or when it’s dark outside to maximize your viewing experience.

Every projector has a usage range, that means, how big the picture on your wall or screen will appear when the projector is a certain amount of distance away from it. So, for example, if you have the Vankyo Burger 8.5 feet away, you’ll see a 100″ image. At 5.2 feet you’d get a 60″ and 1.6 feet would be a 20″ picture. The benefit to being closer is that you’ll have more brightness and color, while being further away you’ll have a bigger overall size. This will come down to user preference, you may need to experiment a bit.

There aren’t many ports on this model compared to other Vankyo versions. In fact, it seems to be made to mostly support modern media devices because of its HDMI input. This is the port used by the majority of every device in the past decade or longer. It’s here where you’ll plug in your Apple TV or Roku box, Xbox One or Nintendo Switch, and your Blu-ray player. If your goal is to use those you’ll be totally covered here. 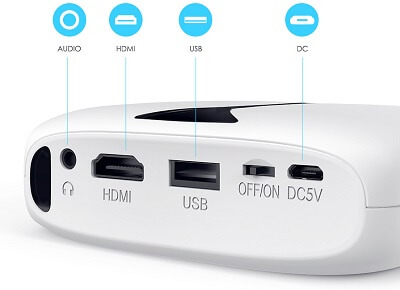 Aside from that there’s a 3.5mm audio jack that you can use to hookup external speakers or headphones. The internal speaker is definitely adequate, and pretty typical for a projector this small. I highly recommend you plug in additional speakers to enhance the audio experience though. It’ll be louder and have more bass than what the projector is capable of producing. You may even have some old computer speakers or something laying around that you could use.

You also have a USB port where you can plug in a flash drive to play video files off of directly. This is handy if you have some movies on your computer that you want to playback without the need for an additional box hooked up. Not every file format will play but it can be really convenient. 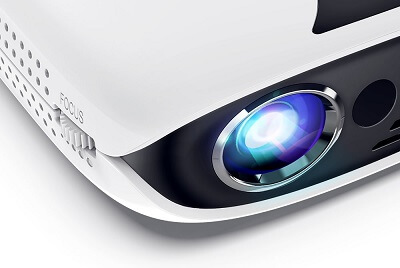 If you’re interested in hooking up your smartphone or tablet you’ll be happy to know that this model supports both wireless and wired screen sharing. This will let you see a copy of whatever is currently on your phone or tablet and display pictures, videos, or apps. It’s pretty nice if you want to show something like vacation photos or see an app or game enlarged on your wall. Everyone won’t have to huddle around your small phone to see it this way. 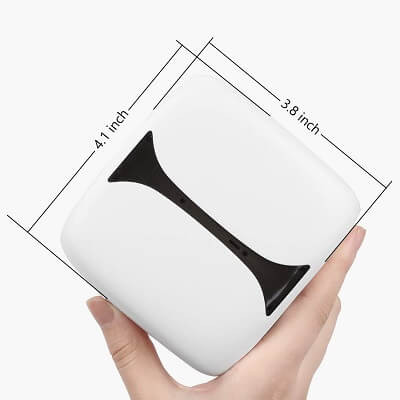 The Vankyo Burger 101 mini projector is made for people that need maximum portability and want the ability to watch 3D movies. The size of the device is about the size of, I guess, a burger funnily enough. Because of this it’s also important to note that there isn’t much fan noise produced when operating and would be a quieter option compared to alternative models.

You can play a movie anywhere you want or hookup your favorite game console and display it on your wall. Overall, it has some super convenient features but it’s also made for a person that’s looking for a specific type of machine. If you love watching 3D movies and love the idea of having a rechargeable battery inside to watch something anywhere you want, then this is a very good choice for you.

I should also mention that there’s a long two-year warranty included. This is actually quite a long time, especially compared to some other brands. If you have any issues with the projector, the Vankyo company can help resolve your problem within that time frame. When you purchase this model you also receive a tripod, remote, HDMI cable, an AC adapter, and a carrying case included. You’ll be able to enjoy using your projector right away once it arrives. If the battery and 3D capabilities aren’t essential for you I’d recommend considering either the Vankyo 510 or the Vankyo V630. They have higher technical specifications but would also have more fan noise, not be as portable or have a battery, and wouldn’t support 3D movies. It will all come down to what type of projector you’re searching for and review the features you personally require.

Go ahead and visit the following links to read more information and see the latest running offers. Be sure to add the product to your shopping cart to see a complete cost including tax and all that.

Update: Some of the Vankyo projector models are offline from Amazon at the moment. If you’re willing to consider a similar model, I’d suggest checking out the Vankyo GO300, which also contains a larger battery than the Burger 101.