The Vankyo GO300 projector is a model that has modern functionality not found in other offerings from Vankyo. It comes equipped with Android 7.1, making the machine a “Smart” system. This means you’ll be able to download apps and use various Android features like screen casting. It also has a built-in 7000mAh battery, allowing the device to run off of that instead of having to be hooked up to a wall outlet the entire time. In many ways, this is similar to the Burger 101 model but improves on that in a few aspects. 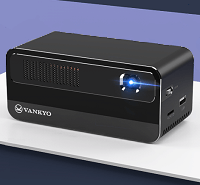 There are a lot of unique features and tidbits to unpack here and I know you’re probably searching around online to figure out whether this projector is right for you. Do you want something that can be used anywhere, even outside without the need of extension cables? Are you looking for a smart system to load apps and things on directly without the need of additional devices? If those are a few things you’re interested in doing, you should keep reading and review the information below.

Update: Unfortunately, this model isn’t on Amazon anymore. I’d recommend you consider either the Nebula Anker Capsule or the WeMax Dice as possible alternatives.

Regular projectors can only take input from external media. If you want to use YouTube on those types of projectors, you’ll need some sort of extra device. The Vankyo GO300 however has Android 7.1 built right into it, which gives you the ability to run apps directly. You can browse the app store for a large variety of games and utilities to enhance your entertainment experience. This also means that apps can be updated and improved over time. You won’t be stuck with basic default apps like on a common projector. Perhaps you could install “Kodi” on it and have an all-in-one machine. 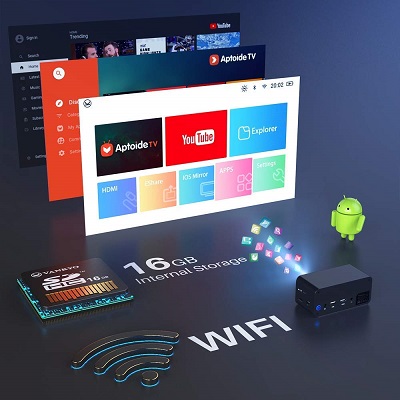 You can also use your Android smartphone to control your projector. This comes in handy and allows multiple people to connect without needing to pass around a remote control. If you have videos or photos you want to share from your phone just connect and you’ll be able to mirror your screen. This means that anything that’s on your phone will be shown through the projector automatically. As far as some of the tech specs go it runs off of a quad core CPU, has 16GB of storage, and 2.4G/5G dual-band wifi with support up to 802.11ac.

Having a rechargeable battery built into a projector is super convenient if you plan on having movie nights outside or in a location that doesn’t have electricity easily accessible. Maybe you want to have a nice cookout with friends and shine a movie on the side of your house. You’ll be able to do that without the need of extension cables or anything.

The size of the battery in this model is 7000mAh, which is a pretty good size. The Burger 101 model, which also contains a battery, is only rated at 5200mAh. If you really want to use your projector wherever you want this is a huge plus here.

It’s great having some fancy smart technology in your projector, but what about the connectivity? All that tech won’t mean anything if you can’t plug in the devices you want to use. Thankfully the GO300 comes with some nice modern ports. For starters, you have one HDMI port, this is the main input used by all modern media appliances. If you have a Nintendo Switch, PS4, Xbox One, Amazon Fire Stick, Roku Stick, Apple TV, Blu-ray player, and similar devices you’ll be using this port all the time. 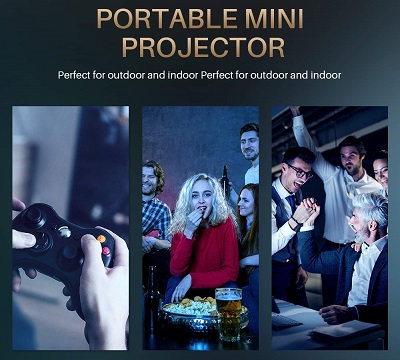 Aside from the HDMI port there are also two USB inputs. These can be used to play videos or display photos from a USB flash drive. Maybe you have a bunch of videos on your laptop and want to play them on the projector without any hassle. Just copy the files onto the drive and the projector will play them back. This removes the need to always have additional things hooked up in order to do stuff.

Due to the smaller size of the projector they’ve opted to use a Micro SD card slot, instead of a regular SD size. This card can extend your storage and will allow you to have the same functionality as with the USB flash drives. Because it’s such a small card it will seamlessly sit inside your projector. A USB drive would stick out from the machine in contrast, and could look a bit awkward to some. You could leave the Micro SD card in all the time and have a collection of movies always with your portable projector.

The final input available is the headphone/AUX port. If you don’t want to disturb anyone you can plug in a pair of headphones and quietly watch your movie or play your video game. You’ll also be able to plug in external speakers into this port to enhance the audio quality drastically. The small projector outputs fine audio but if you’re wanting a movie theater experience you’ll definitely be wanting to plug in a soundbar or some sort of speakers to surround yourself with audio.

There are two forms of wireless capabilities in the GO300 projector, WiFi and Bluetooth. The first does support up to 802.11ac connectivity. This will give you a stronger connection that’s more reliable than an 802.11n device in comparison. The 802.11ac protocol works better through walls and has a higher range so hopefully you’d have a pretty solid link to your router at home. You’ll be using the WiFi to download apps, stream YouTube, and those types of things through the system. 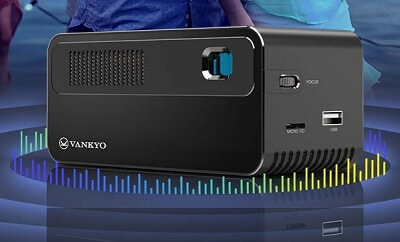 The Bluetooth mode on the other hand can connect to other Bluetooth devices nearby, such as your smartphone. Control your projector wireless without the need of the included remote. If you just want to play some music while hanging out with friends the projector can also double as a Bluetooth speaker. It’s really nice to have a multifunction machine, you have more choices on how you can use it.

Of course the image quality is pretty important when choosing which projector to buy. You don’t want something too dim that you can’t use when there’s some sort of minor light in your room. The Vankyo GO300 has a “native” resolution of 854×800, so it won’t be quite as crisp as a higher resolution projector but it can receive 1080p content. Just be aware that textures and things will be slightly more muted visually. The color reproduction seems to be pretty good though and does have some nice saturation to it. I should mention that this native resolution is the same as the popular Anker Nebula Capsule. 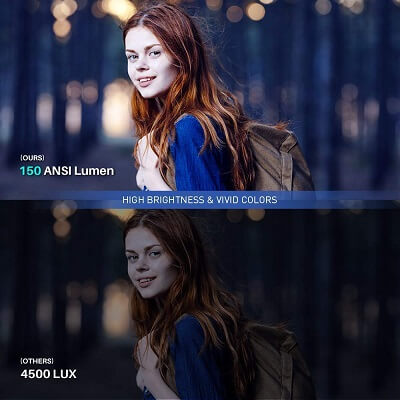 The brightness of a projector can be rated in many different ways. There’s one measurement that has been standardized and that’s “ANSI” (American National Standards Institute). This model has an ANSI rating of 150; however, this can’t be directly compared to “lumens” ratings found in other projectors. They may seem higher but the reality is you can’t translate them into ANSI lumens. The 150 number is actually pretty good, for example, the popular Nebula Capsule projector has a rating of 100.

The Vankyo GO300 Smart Wi-Fi mini projector is made for a certain type of person. Someone that needs portability, intelligent software, and wants an all-in-one device. Having Android 7.1 is great for being able to load apps, games, and utilities to increase the versatility of the machine. You’ll be able to actually update your apps and not be locked in with basic programs, like the ones found in other projectors. Maybe you can install the popular “Kodi” and have a complete media center in this one box. 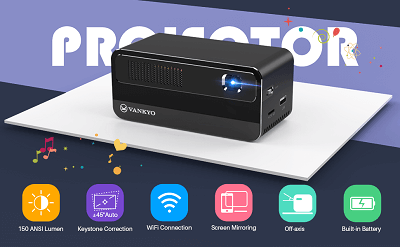 If you love the idea of being able to take your projector outside or over to someone’s house, you can thanks to the compact design. The 7000mAh rechargeable battery means you can use the projector while you’re away from a power outlet. Though, just to clarify, you can use the projector hooked up to the wall with the included AC adapter. You just have a lot more freedom to choose how you use this versus other options.

The throw distance is 9.8 feet to get a 110 inch screen and somewhere around 5 feet for a 60″ image. Be sure to use the focus scroll wheel on the side of the machine to precisely focus the picture on your wall for a clear appearance. If you want an all-in-one box that can double as a Bluetooth speaker, screen cast, run off of a battery, and run apps this seems to be a good candidate for you. If you’re looking for something even brighter I’d recommend reading about the Anker Nebula Mars II / Pro, which have 300 and 500 ANSI ratings respectively. An alternative projector brand with similar features could be the popular Kodak Luma projector series.

Visit the following links to see the newest offers and deals running. The Vankyo company sometimes offers coupons on their machines so be sure to check and apply them if they’re available. Also, I recommend adding the projector to your shopping cart so you can see a complete cost including any taxes and coupons.