The Vankyo Leisure 3W projector is basically an updated model “3” with WiFi functionality added in. If you’re already considering getting a Leisure 3, then it may be wiser to consider this newer 3W variation instead. This decision is likely going to come down to whether you want or need the built-in wireless screen sharing feature. Both of the versions are very similar overall but I’ll be sure to point out any unique aspects about them below. 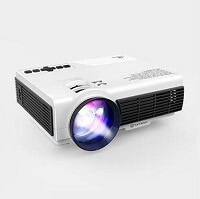 There are a lot of versatile inputs and technical specs that make these LED projectors super convenient. However, it can be challenging to choose which projector to get when there are dozens and dozens of options around. I’ll try to review the details and explain things so that you have more thorough information that’s easier to understand. We might as well start with the wireless portion since that’s a main feature here.

Being able to share your smartphone screen on a big screen for others to see can be really satisfying. Imagine having your friends over and everyone being able to connect their phones to share their images, videos, and more. Normally, you would need an additional wired cable to do this with other projectors that lack wireless functionality. This would reduce your freedom of movement since you’d have to stay near the projector. Now with this you can just connect your projector to your home router and you should be set to cast your smartphone and tablet screens.

Another nice feature, thanks to the WiFi, is being able to watch YouTube directly from the device since it comes preinstalled it seems. It’s handy having this capability for anyone that wants to be able to use their machine without always having an additional device hooked up to it. I could see that being used often for anyone that plans on carrying their projector to different locations. I’m sure you may already have an Amazon Fire Stick or Roku Stick but it’s definitely a nice inclusion at least.

The 3W has a plethora of ports overall to use with your favorite media appliances. You have an HDMI input that can be used with practically every modern machine. This includes media sticks such as the popular Amazon Fire Stick, Apple TV, and Roku. Many newer laptops also have an HDMI port which will allow you to screen share your laptop to your projector. If you play modern video games they also utilize this HDMI interface. This is the port you’ll likely use the majority of time.

There’s also a USB port and an SD card reader built into the projector. These ports will allow you to playback your own video files using either SD cards or USB flash drives. This can be very convenient if you want to keep a collection of movies on your projector at all times. All you have to do is leave the drive or card plugged in and you can easily take your videos to another room, outside, or over to someone else’s house.

If you’re the type of person that loves playing classic video game consoles or has a huge DVD collection there’s a chance you’ll be using the AV port quite a bit. This input uses the classic(ancient) red, white, and yellow cables that were mostly used 10+ years ago. I suppose this feature isn’t that important for some people but it’s nice having the ability to enjoy your old devices in a new way. Plus those older devices tend to run at lower resolutions which may fit better to this sort of projector. 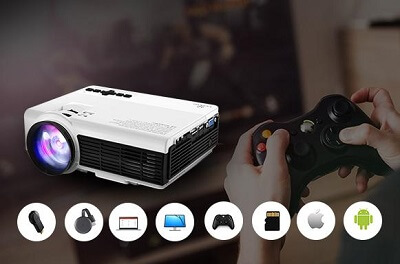 The VGA port will probably be used the least amount by people. If you have an older desktop you can use this to share your screen to the projector. Unfortunately only a video signal is carried over this input so you’ll need to also use the audio port, which means an additional cable would be needed. If possible it’d be better to use the HDMI port since that can carry both audio and video signals via one cable.

There are dual 2-watt speakers inside which will provide some stereo sound. However, like with most projectors, there’s limited internal space and audio quality tends to suffer because of this. The projector will be loud enough for many situations but you do also have the ability to upgrade the audio by hooking up a pair of external speakers.

The onboard auxiliary jack lets you plug in any compatible speakers and fill your room with loud high-quality audio. I think for most cases the internal speakers work totally fine but it could definitely be an upgrade to consider if you plan on using the projector long-term. You may already have some speakers that you could use since it uses the standard 3.5mm audio jack.

A contrast rating is what determines how vivid a projector’s image will be. In fact, it relates to the colors produced and a higher number will show more saturated looking colors. The rating of the Vankyo Leisure 3W model is 2000:1, which is pretty standard for a projector of this type. You can expect a relatively common looking picture compared to similar brands at this price point.

Brightness is a fairly obvious technical spec to talk about. A higher brightness rating will give you a brighter image. This is especially important if you plan on using your projector while there’s ambient light in your room. Maybe you want to have some mood lighting on or there will be sunlight from a window. It’s best to get a projector with the highest possible brightness rating for these situations. The rating of the 3W is 3600 Lux, which is the same found in the original “3” model.

This model supports up to 1080p input sources but only has an internal resolution of 800×480. This means that you’ll get a slightly blurrier image compared to a native 720p projector. How much this matters will come down to personal preference, if possible it’s best to get at least a native 720p model for a crisper picture. This will allow you to see more visual detail such as in textures and fabrics. 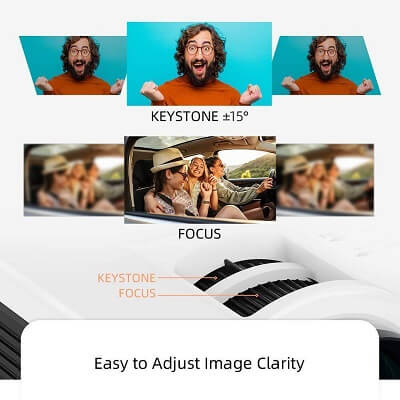 A higher resolution also helps separate elements to be easier to distinguish. If you don’t care about seeing strands of hair and sharper details then this may not be that big of a deal for you. Especially if you just want a projector to use to complement your TV and have fun with. It’s also fine for animated movies if you have kids and plan on having that be a use for them.

The Vankyo Leisure 3W is very similar to the original model 3 as they share many of the exact same technical specs. However, this model seems to be a better choice due to the wireless capabilities. Being able to share your phone screen wirelessly without the need of additional cables is really convenient. Though, I guess it may not matter if you don’t plan on using that feature. This really comes down to whether you want wireless functionality so you’ll have to be the one to decide how important it is to you. 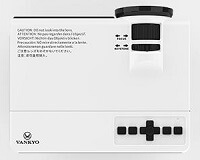 If you want all of these features I would probably recommend you consider the Vankyo 470 instead. It has better brightness, higher contrast, native 720p, WiFi, 2 HDMI ports, and more. I think most people would be happier with it overall due to the better specifications. There’s an article on the site that you can read for more detailed information. Likewise, if you just want a model 3 but with WiFi, just get this 3W version then.

I should also mention that this 3W model includes a long 3-year warranty according to the info provided by the company. This can give you some peace of mind knowing you’ll have a projector covered for a solid amount of time. I would tell you to ask yourself how important the WiFi feature is and if the specs are good enough for you. Hopefully you can narrow down your choices and get something you’re happy with.

Click here to read about the Vankyo 470. (better specs and features)

Go ahead and visit the following links to see the latest offers that are available. Prices tend to change now and then so I’d recommend that you add the projector to your shopping cart to see a total cost.