The Vankyo Leisure 430 is yet another addition to the “Leisure” branded projector line. It has a sleek modern design that is far less boxy looking than the previous Vankyo 420. There has also been a brightness increase to 4000 LUX now, up from 3200. This means that the newer model will produce a brighter and more vivid image compared to earlier models. It will also allow you to use the projector under less than ideal room lighting situations. 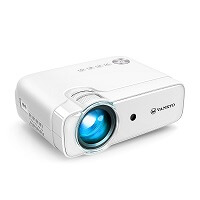 You’re probably wondering whether this 430 model is a better buying choice than the previous versions and how exactly they differ from each other. Upon reviewing the specifications they can seem to be very similar in many ways. So, is it better to save some money and get an earlier model or are the improvements worth the slight increase in cost? I’ll jump into the brightness and contrast to start things off and point out what’s changed.

The most obvious improvement is the brightness increase to 4,000 LUX. Doing a little math, this is around a 18-19% increase based on the specs over the 420 version. It isn’t a huge jump but could be worth it if you plan on using your projector in an environment where there’s some sort of light. Maybe you have a window or two with some blinds or curtains that don’t block out the sun 100%. Having a projector with a higher brightness rating will be a bit more flexible with that. 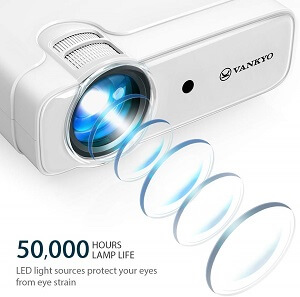 Of course every projector will look its best when running in a pitch black room but it’s nice having the versatility and freedom. You don’t want something that you can only use when there’s zero ambient light.

On the contrast side of things it has a grade of 2,000 to 1. This number relates to the saturation of color displayed. A higher number means you’ll see darker blacks and more vivid colors. The technical meaning of the ratio is the difference between the brightest color and the darkest color that the projector can produce. The 2000:1 ratio is pretty typical of what you’d find and can produce some pleasant colors.

It’s very important to have a large variety of inputs available for use. The type of connectivity will determine what devices you can plug into the projector. Do you want to play old VHS tapes? Do you have old video games systems you want to use with a projector? These legacy devices require a specific type of input in order to work. Thankfully, the Vankyo 430 is compatible with AV composite devices. These are the old red, white, and yellow cables used more commonly in the 90s/00s. Check out the very short video below to see a few specs and info about the projector in a 360 degree view.

Well, what if you’ve never heard of those old machines and you’re strictly searching for something to use with your modern game console or blu-ray player? This projector model is also compatible with these as well due to its HDMI port. Just plug in your device and it’ll show up on your wall. Audio is passed through automatically along with the video. You could put in an Amazon Fire Stick and stream Netflix or use all the functionality of that as well. 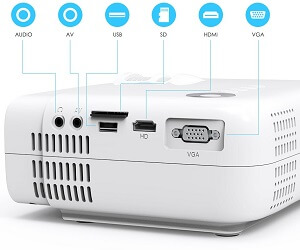 Aside from those ports you also have a VGA port available which will be used for plugging in your desktop computer, for example. It’s mainly a legacy port and doesn’t carry any audio over this input option. Many laptops come equipped with HDMI ports to use so you may not ever use this VGA port, but it’s definitely nice to have just in case the occasion arises.

To round everything out you can plug in either an SD card or a USB stick to play videos or view images. It’s handy to have in case you have some video files on your file sticks and want to share them with friends or family. I’d say it’s convenient if you don’t want to deal with plugging in additional devices into the projector. Though be aware that it may not handle every modern file format and encoding.

There is a HiFi stereo speaker installed in the machine so you’ll be able to have audio right out of the box with no additional accessories. It’s pretty well-known that projectors don’t have the best speakers built inside of them though. In fact, many people add external speakers via the 3.5mm port. This will allow you to have much louder, clearer, and room filling audio. 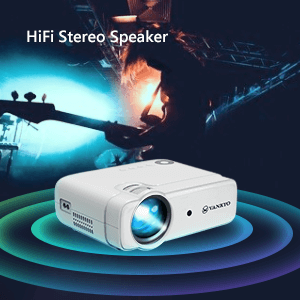 You could plug in a sound bar or high-end computer speakers to really enhance your experience. If you’re setting up a home theater it’s almost a given that you’ll likely want some sort of speakers to complete the project. Overall, the internal speaker is fine, it works and is totally acceptable for many situations. However, you do have the ability to push the sound quality even further which is nice. 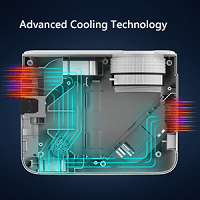 It’s pretty clear that the Vankyo Leisure 430 mini projector is a super versatile machine. The amount of input ports available allow you to plug in virtually any media device into the projector. You’re able to view your video games or movies on the entire size of your wall. This model specifically has upgraded features like a higher brightness capability which will allow you to use it more frequently. It also comes with a nice carrying case to either protect it or take it over to someone’s place.

People have used these to project a movie in their backyard against their house. You could have a cookout and do that too with all of your friends or family. It has a low entry point which makes it a smart choice to try things out. There’s also a 3 year warranty and even a 100% money back guarantee if you aren’t satisfied for some reason. This should reduce any fears you may have about buying the projector and allow you to feel secure with your purchase. 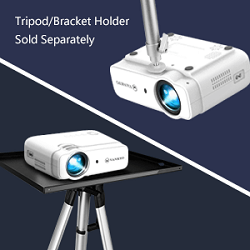 I should also mention that the projector is LED-based. This means that there isn’t a traditional light bulb inside heating things up. The lamp life is claimed to be 50,000 hours~ which is pretty insane. If you break that down per day or per week it should last a very long time. I’d assume you’d probably upgrade before that would be an issue. If you’re looking at making a good projector purchase and want something affordable but also versatile, I’d definitely recommend getting this.

For a model choice that’s a step higher I’d recommend you read about the Vankyo 470 and Vankyo 430W as they both offer 720p native resolution and wireless capabilities. And if you want to take it an even bigger step you can consider the 510, V600, or V630. They have increased brightness, contrast, and native resolution all the way up to 1080p. Enjoy becoming a proud owner of your own projector, hopefully you can find the right one for you.

Here are some links to the latest offers available. The prices can update frequently so I’d recommend adding the projector to your cart to see a total cost with any coupons or tax included.