The Vankyo Leisure 460 projector is part of the 400-series models, which there are a lot of apparently. I’m just going to assume you’re searching around online and wanting to know if this model is better than the previous versions. Perhaps you’d also like to know whether this model fits your own needs in a projector. Is this model just a redesign without any improvements or is there something substantial here? There are so many questions to cover here. 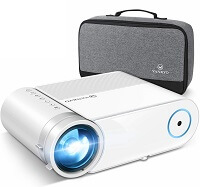 Do you want something that has a native 720p resolution? Well, this model is equipped with that improvement at least so you should probably continue reading. There’s also 4,000 LUX brightness and 3,000:1 contrast ratio which will give you a bright saturated picture. I’ll try to review as many features as I can and explain things clearly to help you make an informed buying decision. I definitely know how many different projectors there are and it can be really confusing trying to narrow down your choices. I’ll begin with the resolution right away to start things off.

The resolution rating is very important for determining how sharp a projector’s image can be. You have to be careful reading the specifications of many models because the real phrase you want to be looking for is called Native Resolution. This is the internal rendering specification and the resolution you’ll see on your wall or projector screen. The Vankyo 460 has a native resolution of 1280×720 which is 720p. It does support input from 1080p devices though and will scale them.

You’ll see a clearer image with this compared to a lower 800×480 model for example. It applies to both movies and video games, if you’re a gamer. Textures will be sharper and the overall picture will appear less blurry. For the Nintendo Switch, Xbox One, PS4, or PC it’s definitely better to get something with a higher resolution so you can see more detail in your games. For movies you’ll be able to see things like hair strands, fabrics, materials, and similar things at a higher fidelity.

It’s obvious that the best environment to be using a projector is a totally dark one. Ambient light from lamps or windows can fade your image and make it looked washed out. The higher the brightness rating is for your projector, the more situations you’ll have to use it. 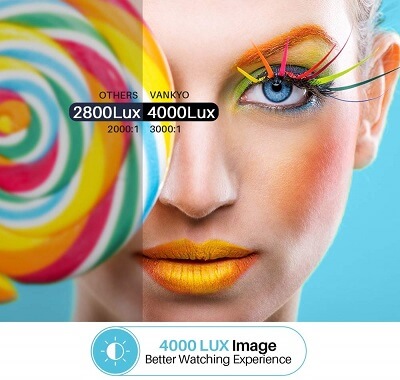 The 460 model has a brightness of 4,000 Lux which is a bit higher than the 3,600-3,800 Lux found on the previous models. This means you’ll enjoy a brighter picture in comparison and be able to use the projector in a good variety of situations. Sometimes it’s not always possible to be in a dark room so it’s nice to have some flexibility here.

Also, since this is an LED-based projector, the lamp life is a whopping 50,000 hours of use. It’s a huge benefit buying an LED projector over a traditional light bulb variety because of this fact. You won’t have to worry about buying costly replacement light bulbs every few years just to enjoy your appliance.

Another improvement is the contrast ratio which is now rated at 3000:1. This is the same rating you’d find on the Vankyo 510 and much higher than the 2000:1 rating on the preceding models. Contrast is basically the color range between the brightness of “white” and the darkness of “black”. Having a higher rating will give you an overall more visual appealing quality.

Colors will be more saturated and look more dramatic. If you love watching animated movies you’ll notice colors tend to look better with higher contrast ratios. This is also true for video games that have a lot of vivid colors being shown.

I’ll start with the most popular port which is the HDMI, everyone’s favorite and likely the most important nowadays. The HDMI is what you’ll be using to hookup your modern game consoles, Blu-ray players, Roku boxes, Apple TV, Amazon Fire Stick, and anything else that requires the “HDMI” input. Most modern devices use this so there will be a lot of swapping between cables because there’s unfortunately only one of these ports on the projector. It’s a minor inconvenience, but it’s nice that the port is there at least and supports so many different appliances.

Next up are the 2 USB ports which you can use to plug flash drives into. Those are the tiny memory sticks that you can store files on. Just load movie files onto the flash drives from your computer and play the videos directly without the need of additional media devices. This comes in pretty handy when the system supports the videos. However, it doesn’t support all encodings especially modern ones like HEVC.

Are you the type of person that just loves older tech like VCRs, DVD players, or classic gaming consoles? Well, you’re in luck because you can use those with this projector thanks to the AV/Composite port. This port uses those old red, white, and yellow cables via an adapter. Maybe you want to plug in your Nintendo 64 and have a giant screen for some races in Mario Kart or battles in Smash Bros. All of that is possible because of the legacy support. I guess some people won’t use this feature but it’s pretty cool that it’s included anyway. 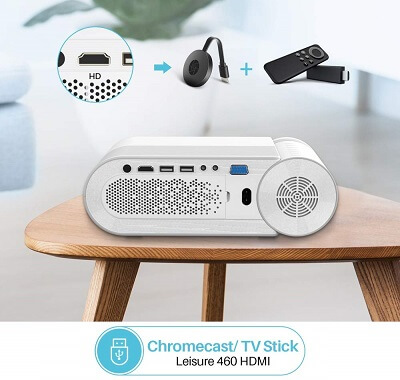 Another port you have is a VGA cable and that’s for older desktop computers mostly. If you have an older PC that you want to use with the projector to maybe screen share or play an old game you can do it with this. Just be aware that no audio information is carried over the VGA port so you’ll only receive video. If you want sound you’ll also need to use the next port, the audio jack.

The AUX/Audio port is your typical 3.5mm input where you can hookup headphones or external speakers. I definitely recommend considering getting some additional speakers for your projector to really enhance your experience. There’s a 3-watt internal speaker which does an okay job at pumping out audio and music but if you want a real theater experience you’ll need a soundbar or something. Maybe you have some old computer speakers laying around that you can use or something, anything that uses the AUX cable should work.

I think the Vankyo Leisure 460 has some nice improvements over the preceding models and offers a lot of functionality. With all of the connectivity options you can plug in virtually any type of media device and use them with this projector. It has a higher native resolution, more brightness, and higher contrast over the previous 400-series projectors which makes this a smarter choice for most. It does lack an SD card slot but that’s a minor issue I think. 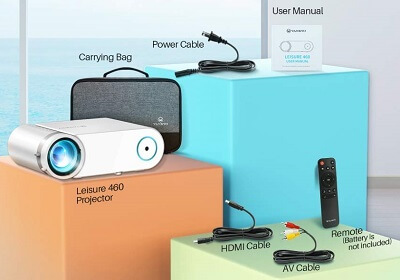 The projection distance is from 3.8 feet up to 16 feet and will deliver an image size up to 200 inches. It can give you different experiences in different environments. Try taking the projector outside and play a movie while you have friends and family hanging out. Also remember that thanks to the super long LED lamp life you don’t need to replace the light bulb.

You also get a carrying case included and a variety of cables so you can begin enjoying your machine right out of the box. If you’re already considering the 410, 420, and 430 models I’d say go for the 460 if you don’t need the SD card slot. Just review all of the information between the models and hopefully you’ll be able to pick out the projector that suits you the best. Good luck!

Go ahead and visit the links below to see the newest deals currently running. Sometimes Vankyo offers coupons on their products so check them out and see. I’d absolutely recommend adding the projector to your shopping cart to see a real cost including taxes, coupons, and whatever else.