The Vankyo Performance V630 is an updated version of the popular V6XX series projectors. This model is now the fourth version that exists, which may make the consumer a bit confused as to which one is the best. They actually do have differences that may not seem apparent at first glance. Perhaps you’d assume that the higher the number, the better it is, but the V620 for instance comes equipped with a “Component” input, which the others don’t have.

I’m going to go ahead and assume that you’re looking for answers to some questions. You undoubtedly want to get a projector that’s right for you, one that has the features that you need. Do you need a certain type of connectivity? What about the specifications and their meanings? I’ll try to go over as many things as possible to point out all of these things to help you make the right buying decision. Let’s review the resolution and jump into everything right away.

This is a term that is thrown around a lot and is used in ways that the average consumer may not realize. The important information that you need to know is the “native resolution”. This spec is the actual internal resolution that the projector is capable of projecting onto your wall. The higher the native resolution, the crisper and clearer your image will appear. This means you’ll see finer textures and skin pores in a movie or video game, versus a lower 480p projector, which will be blurrier.

Whether this is really important to you depends on how clear of an image you’d like. The Vankyo V630 is a true 1080p machine and is able to output a full HD video with all detail intact. It’s recommended that you get a projector with native 1080p if you watch a ton of movies or play video games. Seeing the extra detail can really help while gaming so the image isn’t too soft.

Note: If you do end up buying this model be sure to manually adjust the “focus ring” to get a clear picture. This is very important, there isn’t any auto focus, so you’ll have to physically turn the focus dial on the machine for a crisp image. 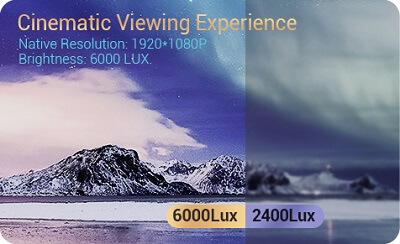 Having a bright enough projector is also an important aspect. A low brightness rating will limit your overall usage and location that you can use the device. If you have a brighter projector you’ll be able to use it a far more times during the day. Maybe you want to project a giant image against your house with your friends, that’s totally your prerogative and it’s something some people actually do.

The brightness rating of the V630 is an adequate 6,500 Lux (recently updated from 6,000) and if you compare that to the popular Leisure 430 it’s about a 60% increase. Some companies also sell a giant inflatable projector screen that you could consider if you plan on having some outdoor parties. You could have a movie playing or something outside during the event which would be pretty neat.

Contrast is an interesting technical thing to talk about because it’s a measurement of how bright and dark the colors of the projector can get. All of the bright colors will look far more striking with a higher rating. The darker colors will appear as a more “true” darkness.

If you’d like an overall pleasing picture quality it’s important to look at the contrast ratio. The rating of the V630 is 5000:1 which by comparison the 430 model has a rating of 2000:1. So, the images will appear more intense and rich comparatively.

The keystone is basically a way to align your projector image when the machine is off-center. Maybe you have it set up to the side, up above, or down really low in your room. With the keystone correction you can adjust the image so that it sits as a perfect rectangle against your wall or screen. 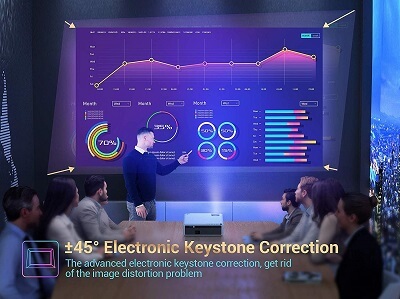 A typical rating you may see tends to be about 15 degrees, that’s pretty common. The V630 however offers up an extra wide 45+/- degrees of freedom. That means it can be up to 45 degrees off-center and you’d still be able to have a flush picture from the projector. Having a higher rating allows you to place your machine in more places. This might not be that important if you already plan on having your projector directly in front of your wall.

All of this is pretty nice to hear but what about the lamp life? This was a major drawback to owning a projector in the past because of the expensive bulb replacements. Well, a normal light bulb variety may have a lamp life of 6,000 to 10,000 hours, like in the VS250.

The Vankyo V630 is an LED model which does not use a typical light bulb, because of this it has an extended life of 50,000~ hours. This could help ensure that you can use your projector for a long time to come. In fact, I’d imagine maybe you’d even upgrade your projector before the bulb would fail. LED-based bulbs aren’t as bright as traditional varieties but the lifespan is definitely a huge perk.

It’s so important to have the right inputs available for what you plan on plugging in. You don’t want to get a projector home only to realize that it doesn’t support your preferred media device. If you love using an Amazon Fire TV stick you need to make sure that the projector has an HDMI port, for example.

The Vankyo Performance V630 has two HDMI ports available. This is really for all of your modern devices including media sticks, gaming consoles, Blu-ray players, and more. It’s nice that there are two ports just in case you want to leave two devices plugged in at the same time. You’ll only have to switch the setting via the included remote instead of having to unhook something.

There’s also two USB ports and an SD card slot as well. This is where you’ll plug in your flash drives to play movies from directly. Not every format and encoding is supported unfortunately but it’s great having the option when it works.

There are some legacy inputs for your old devices as well. Maybe you have a huge collection of VHS tapes and you want to be able to watch those. Well, you’d actually be able to do that with this projector thanks to the AV/Composite port. This is the old red, white, and yellow cables you may remember seeing before. You’ll use this for VHS, DVD players, and classic game consoles like the SNES or GameCube. 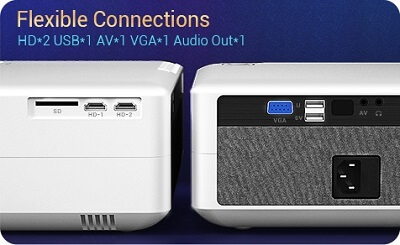 To round it off, you have a VGA input for desktop computers. So, you can plug your tower computer directly into the projector and have your computer screen on your wall. Be aware, this port doesn’t carry any audio information so you’ll also need to use the audio port to pass-through sound separately.

As with every projector, you’ll really only be able to get the “best” audio experience by plugging in external speakers via the AUX port. The V630 does have a Hi-Fi stereo speaker, two 5-watt speakers to be precise, and that will do a fine job filling the room with audio. If you’re going for a movie theater type of experience you’ll probably want to upgrade at some point. Just attach a soundbar and subwoofer to get the loud sound shaking cinema feeling.

Important Note: Do you plan on using an Amazon Fire Stick TV to stream video apps? You may need to turn off “Dolby Digital Audio” in the settings. Certain projectors don’t have this capability to playback the audio format. You can adjust this by taking the following steps from the Amazon Fire TV menu: Settings > Display & Sounds > Audio > Dolby Digital Output > then switch Dolby Digital Plus to either OFF OR choose the PCM option. 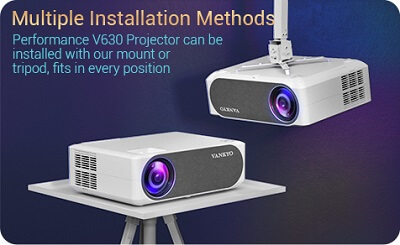 There’s definitely a lot of appealing things about the Vankyo V630 projector. It has support for a ton of devices thanks to its wide range of inputs onboard. The brightness and contrast is also pretty nice since it’ll provide a pretty bright and vivid picture. Of course, the fact that the machine is outputting a true 1080p image is also a big plus. This is really important if you watch a lot of HD content on your Netflix account, Blu-ray videos, or modern gaming consoles.

The V630 is a solid choice if you’re looking for a projector with these specific features and performance points. If you’re trying to decide between the V600, V610, V620, and V630 that’s another story. They’re very similar but there are a few quirks about them that make them each a bit unique. Go ahead and read each of the articles for further complete information and hopefully it helps you narrow down which model to purchase. If you’re interested in having wireless functionality read about the newer Vankyo V630W and Vankyo 530W models.

If you’re looking for deals and offers click the links below to see the newest prices. I highly suggest you add the projector to your shopping cart to view an entire total. Sometimes the company will offer coupons or something which need to be applied on the product page.

Update: It seems that this Vankyo model isn’t on Amazon anymore. However, I did find another brand that is offering what seems to be a VERY similar model to the V630W. I looked over the features and specifications and the company states that the performance is even better than the V630 and V630W. It has two HDMI ports, AV/Composite video, USB, Audio Out, and there’s wireless capabilities too which the V630 completely lacks. Plus there’s a 120″ projection screen included as well with this newer model. All while being considerably cheaper than the V630.

With the specs being better, the design being the same, having a cheaper price, and the addition of a free projection screen… I’d definitely recommend checking this newer model out on Amazon if you’re considering either a V630 or V630W. 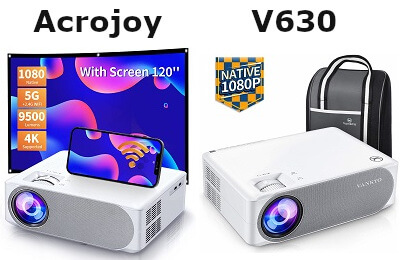 As for any downsides there isn’t an SD card slot, there’s only one USB instead of two, and it lacks the extremely outdated VGA port. But I think 99% of people will never use a VGA port and you can just use a USB flash drive instead of an SD card. So overall you’re just getting a better performing machine, plus a 120″ projection screen, at a better price.

If you aren’t interested in that, click the following link to view the best selling projectors on Amazon. Perhaps you’ll find an interesting popular alternative.