The WiMiUS K1 projector is a native 1080p machine that’s capable of running at 60Hz, which is important if you’re a gamer and want to play the latest titles to their fullest potential. There are also some other nice features that help this model stand out among many alternatives. The lamp life will last up to 200,000 hours for instance. If you used the projector for 4 hours a day, everyday, the lamp would last up to 137 years. I’ll take a wild guess that you’ll likely upgrade to a newer projector by then. 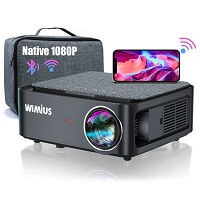 These types of LED-based models are great for anyone looking to buy their first projector. They tend to offer versatile performance with minimal maintenance, all at a competitive price. But if you’ve already started searching for which projector to buy, you’ll have quickly realized just how many choices you have. It’s even more difficult if you aren’t familiar with certain terms. I’ll review all of the technical aspects in a simple way, to hopefully help you decide whether this model is the best choice for your needs.

One of the biggest reasons for choosing the K1 projector is if you play a lot of modern video games. Many projectors only display 30Hz, which is the speed capable of handling movies and TV shows. However, the latest console games can run faster, twice the speed or even higher. Having a projector that can display this higher frame rate will give you a smoother image overall. This means faster action and response times, though it won’t make you not suck at the games.

PC gamers have been enjoying this higher speed since practically the dawn of time. It’s possible to plug your desktop or laptop directly into the projector to enjoy the same 60 fps performance. That is, if you have a powerful enough computer to run games that fast. So, if there’s someone in your household that plays video games, this K1 model should be higher on your list of choices over an alternative 30Hz projector.

There are a lot of components that work together to determine the quality of your projected image. The resolution rating directly relates to the sharpness of the image. The WiMiUS K1 hardware runs at a resolution of 1920×1080, which is full 1080p HD. This is great for high definition shows and movies as you’ll see more visual details in them. The overall look will appear much less blurry than a lower resolution machine in comparison, such as a 720p or 480p projector. Watch this minute-long YouTube video to see the projector in action under bright lights and darkness.

You have to be careful when reading product descriptions though, as many brands only say their projector “supports 1080p”. Then further in the product details you’ll see that they tend to run at lower resolutions and thus will give you a blurrier picture. The specific term you want to look for is called “native resolution”. That is the true resolution a projector’s hardware produces.

When you set your WiMiUS K1 projector up, you’ll need to manually adjust two key settings called the keystone and focus wheel. Both are very simple to do and don’t take much effort or time, but be aware that you’ll need to adjust these every time you move the projector to a new location. They work in tandem to align and sharpen the displayed picture. 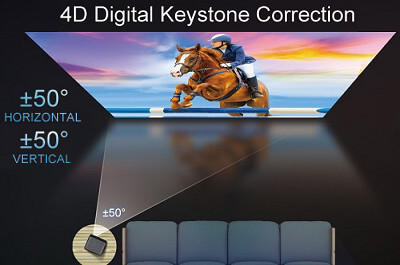 The first setting you’ll want to mess with is the keystone. This will angle the picture both horizontally and vertically until the image is perfectly squared against your wall or projection screen. I’d recommend placing your projector relatively parallel to your wall for the best results.

Then you’ll want to move your attention to the focus wheel, which is pretty easy to understand, as it works very similarly to a pair of binoculars. You simply rotate a physical wheel located at the top of the machine to dial in the sharpness. The sharp “sweet spot” changes depending on how far away the projector is to your wall. That’s why you’ll need to adjust these whenever you move your machine.

I should quickly mention that there’s also a setting to shrink your image down to 60% of its original size. This is super handy for ensuring the picture fits on your wall. Sometimes if your projector is too far away from the wall, it’ll shine onto your floor and ceiling. 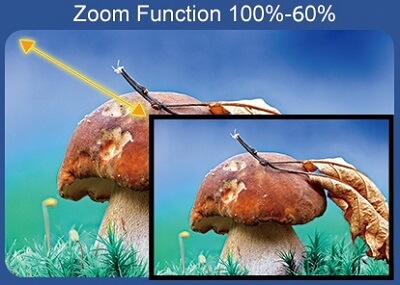 This special function allows you to shrink everything down so it will fit at greater distances. Not all projectors can shrink by this much so it’s another nice bonus of the K1 model. Any projector that doesn’t offer this feature requires you to physically move your machine closer to your wall to make the image fit.

Now we’re talking about the colors that are produced by the projector. Having a high contrast ratio will provide you with a picture that has strikingly vibrant colors and tones. The K1 has a contrast rating of 12,000:1, which is good enough for colorful animated movies or video games to really pop off the screen. Just to put the number into perspective, many movie theaters have a contrast ratio of only around 500:1.

The actual term “contrast ratio” is determined by comparing only the white and black colors. The difference between these two is how a company gets their contrast rating. It not only means that colors will appear brighter, but also that darker tones will be darker and less washed out.

All of this performance doesn’t mean anything if you can’t plug your favorite devices into it. Thankfully the WiMiUS K1 projector comes equipped with a solid variety of connectivity options. To start things off you have wireless capabilities to share the screen from your smartphone, tablet, or Windows 10 computer. This can be really convenient to stream content to the projector without the need of any additional cables. There’s support for both 2.4GHz and 5GHz WiFi. I’d recommend choosing the 5GHz band if your home network supports it.

You also have two HDMI ports. These will be used by most of your devices including streaming sticks such as a Roku, Apple TV, or Amazon Fire Stick. Modern video game consoles and many newer laptops use the HDMI as well. It’s great having two of these ports available, that way you don’t need to swap devices as frequently.

Finally, there are two USB ports that you can use with USB flash drives. This would allow you to keep a video collection stored on the projector at all times. It’s an ideal way to view movies while having an outdoor movie night with friends and family. Not every encoding is supported, but it can play some MP4, MKV, and AVI files just to name a few.

You also have the ability to enjoy old content in a new way, thanks to the RCA/Composite port. The projector comes with an adapter that allows you to plug ancient tech devices in that utilize an older yellow, white, and red cable configuration. You may be familiar with these if you’re over 30 years old.

Perhaps you have a bunch of DVDs, VHS tapes, or classic gaming consoles just laying around. It could be fun experiencing your old content again but on a giant 100″+ screen. Many TVs nowadays don’t even offer this type of port, so it’s a nice extra that’s becoming more and more rare.

Built into the projector are dual 10-watt speakers. This is on the high-end of what’s typically offered on these LED-based machines. I would say that most in this range usually only offer 5-watts of audio performance. With the K1 you’ll hear louder sound than many alternatives and it’ll do a better job at filling a room with audio. For most situations it’ll likely work quite well. 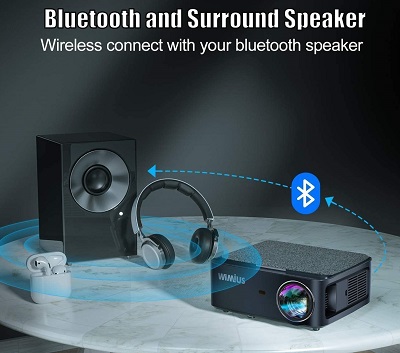 For a true movie theater experience, you may want to consider pairing the projector with external speakers. You can accomplish this by either using the audio out port or Bluetooth if you have wireless speakers. It should connect with most Bluetooth soundbars, speakers, or even headphones. You’ll probably need to refer to the included manual for the connection steps.

If you’re using a media streaming stick in the HDMI port and you’re not hearing any sound, you may need to turn off Dolby Audio in the settings of your streaming device. On an Amazon Fire TV stick that’s Settings > Display & Sounds > Audio > Dolby Digital Output. Then just change it to either “off” or PCM and audio should work fine after that.

The WiMiUS K1 projector seems to be equipped with some powerful hardware that offers impressive performance. There are also many connectivity features that will allow you to enjoy most of your favorite media content. If you’re a gamer the faster 60Hz display will give you a smoother gameplay experience. Because of all the convenient aspects, this really could be at the top of your choice in this price range. 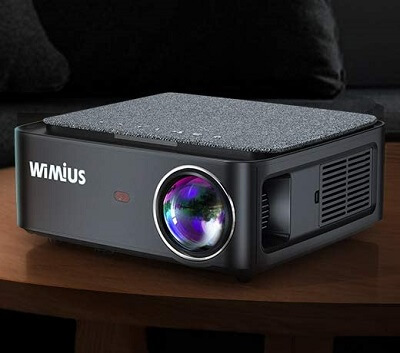 I haven’t even mentioned that the WiMiUS company states, at the time of this original writing, that they provide a long 4-year warranty with the K1 model. The first year is for a free replacement and then the other 3 years is for free repairs. They say to contact them to activate the warranty. This should help give you some peace of mind that you’ll have a projector to enjoy using for years to come.

Like I said before, there are definitely dozens of alternative options you could buy. Hopefully after seeing the specifications you can decide whether this model is right for you. If you aren’t a gamer, or just don’t care about the 60Hz, you could consider the WiMiUS K8 as a possible choice. The company has stated that it’s their best model. But “best” is suggestive and everything will come down to what aspects are important to you personally. The K1 would be a great choice and offers a ton of performance and features.

Go ahead and click the links below to see the latest deals and offers running. The WiMiUS company occasionally has coupons you can apply for discounts. Look for them near the price information on the product page. Since the prices can fluctuate frequently, I would highly recommend you add the projector to your shopping cart in order to view a full total.