The WiMiUS K8 projector, also known as the “WiMiUS Top K8”, is a true 1080p model that offers impressive performance with a good amount of convenient traits not found on some alternatives. The brightness is quite high for an LED projector at 480 ANSI lumens, which will allow you to use the projector even when there’s some ambient light in your room. You’re able to keep two modern devices plugged in at once thanks to the dual HDMI ports on the machine. Plus it supports 4K video and has both WiFi and Bluetooth capabilities. 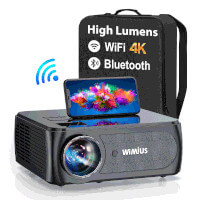 To top all of those features off, at the time of this original writing, the WiMiUS company says there’s also a long 4-year warranty included with the product. It’s good for a 1-year replacement and then 3 years of repair service. There’s obviously a lot to review here so I’ll talk about all of these aspects and more in extensive detail below. Yes I know, how exciting will this be, right?

So, as I was just saying, the brightness of a projector determines when you’ll actually be able to use it. Having a projector with a low brightness rating will limit you to only viewing content in a darkened room. Maybe that isn’t a huge deal to you, especially if you’re a night owl, but why be restricted like this if you don’t have to be? You should get a projector that has enough brightness for far more flexibility. 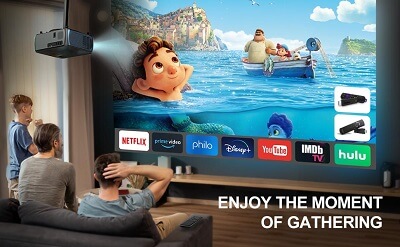 There’s a universal brightness specification that many companies use called ANSI. This is the best way to compare brightness between different brands and models on paper, but not all brands choose to use this “ANSI” brightness standard. Many others simply say “lumens” which is definitely not the same as using a standard measurement, like ANSI is. The WiMiUS K8 projector has an ANSI rating of 480 lumens. This is comparable to the Anker Nebula Solar model, which normally retails for around the $500 area in comparison. It’ll look its best at night, like every projector, but it should still be quite useable during the day with your curtains closed or having some minor lighting.

I should also mention that this model is an LED-based projector. This type of projector has a light bulb system that lasts far longer than older traditional light bulbs. The K8’s light can last up to 200,000 hours of use. That’s a huge reason some people choose an LED projector since they won’t have to be buying replacement bulbs every few years.

Contrast ratio works in tandem with the brightness and will determine how strikingly vibrant the image looks. A high contrast ratio creates a wider range of colors, one that gives you brighter colors and darker tones overall. The rating of this K8 model is 12,000:1 which is very nice for this type of projector. However, I’ve also seen the contrast rated as 15,000:1. Watch this short video for a few more quick details for this projector.

To put it in even easier terms, the contrast ratio is the difference between the color white and the color black. So the color white, on this model, is 12,000 times brighter than the color black will appear, according to the WiMiUS company. This is why a larger number tends to give a more vivid picture and something you should consider when choosing a projector. Animated movies and video games really benefit from a higher contrast in my opinion.

The WiMiUS Top K8 is a true 1080p projector that runs at a full resolution of 1920×1080. When talking about the visual clarity of a projector, the term you need to look for is called “native resolution”. This is what the machine is internally rendering on its hardware. Be careful of models that only say they “support” a certain resolution. These typically render at lower rates, like 720p or even 480p. This K8 model “supports” 4K content but internally it’s still going to be rendering it in 1080p. This is simply the maximum amount the hardware is capable of.

If you love gaming on modern consoles or a powerful PC, having a projector equipped with a 1080p native resolution should be one of your requirements. Otherwise characters, objects, and details will look blurry in comparison. This gets especially true for distant objects that are further away from your camera. Likewise, if you happen to be a cinephile (I was accused of that once), you’ll also greatly benefit from having a 1080p resolution since you’ll be able to enjoy the full image quality of HD Blu-Ray videos.

Resolution is one of the main factors to seeing a sharp image, but there are also manual controls located on every projector that are extremely important to adjust whenever positioning your machine. The first is the focus wheel, this is self-explanatory, but think of a projector like a telescope, where you have to fine-tune the focus of the image depending on the distance to the wall. Don’t forget to do this every time you move your projector to a new area. 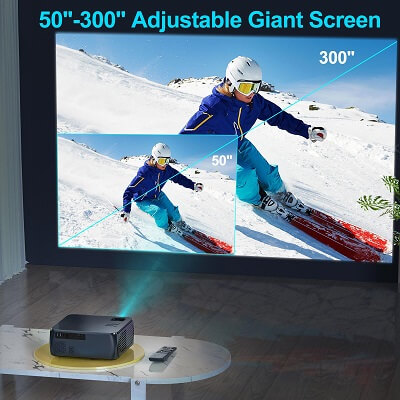 Secondly, you’ll need to adjust something called the keystone. This is usually done first with a manual wheel and then with digital controls, which are located somewhere in the menus. The keystone is what squares up your image so it’s a perfect rectangle against your wall or projection screen. For the best results, and easiest setup, I’d recommend trying to place the projector directly parallel towards a wall.

Another convenient feature of the WiMiUS K8 is the ability to shrink the projected image up to 50% of its original size. This is super handy when your projector is at the furthest possible spot and the image is too large. Then the picture ends up shining onto part of the ceiling and floor. But don’t worry, just go into the settings and shrink the image to fit your desired size. A lot of other projectors can only shrink down to 75%, so it’s really nice to see a model that can go all the way to 50%.

The WiMiUS Top K8 has all of the most important inputs available, starting with two HDMI ports. This is the input you’ll use with 95%+ of your media devices. If you’re a gamer you’ll be using this with your PS4/5, Nintendo Switch, or Xbox game consoles. Likewise, if you own an Amazon Fire TV Stick, Roku, or similar video streaming device you’ll also be using HDMI. Having two of these ports makes things extra convenient since you won’t need to swap devices as frequently. For example, you could keep a Fire Stick plugged in and a game console at the same time.

There are two USB ports that can be paired with flash drives you’ve loaded up with video files. This means you can playback movies or shows right from your machine. Some popular formats that can be played are MP4 and MKV. Not every format and encoding is supported but it’s definitely a nice feature to have. I should also reiterate that this model can display PowerPoint, Excel, and Word files for any business type setting.

Finally, if you’re into ancient media, there’s an AV/Composite input for you. This is that old red, white, and yellow cable from the 90s and early 2000s. If you have any old device that uses that you’ll be able to hook it up to the WiMiUS K8. I don’t think there are a ton of people clamoring for this functionality but it’s good to have for anyone interested in it.

Having wireless connectivity expands this model’s capabilities even further. The built-in WiFi supports both 2.4GHz and 5GHz streaming from your smart device. This includes Miracast and iOS casting. If you aren’t familiar with what this feature is, basically it will allow you to mirror the screen on your phone or tablet, right onto your projector. So, you could share photos, videos, and some apps during a party or while you have some friends over. 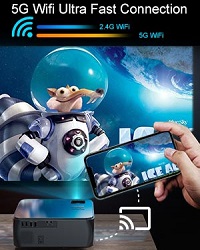 There’s also Bluetooth 5.1 support included, mainly for pairing wireless speakers. Many other alternative projectors only support version 5.0, so it’s nice to see an improvement here. This will give you decreased latency, or “delay”, in sound output. WiMiUS says other brands that utilize 5.0 have about a 1 second sound delay in comparison. Because of the newer Bluetooth 5.1 the K8 model is much faster at around half a second. Other people have stated that they don’t notice any delay in sound.

One quick thing to mention, many projectors don’t support Dolby Audio. If you aren’t getting any sound from your Amazon Fire TV stick or similar device, be sure to go into the Settings > Display & Sound > Audio > Dolby Digital Output and switch that to “Off”. Everything should work normally after this simple change.

The built-in speakers pump out 10-watts of sound, which is pretty adequate. Many other projectors only have 5-watts, or even down to 2-watts on cheaper brands and models. It’ll do a fine job for most small to medium-sized rooms. 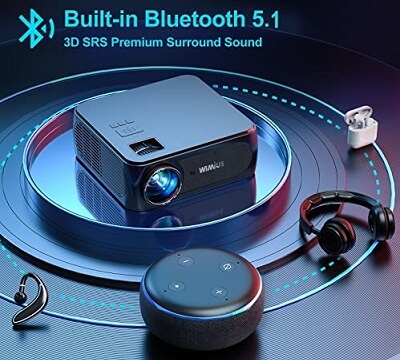 If you want a true cinema experience, it’s recommended that you connect external speakers. You can achieve this by either using a regular 3.5mm audio cable or the included Bluetooth function for wireless speakers or soundbar. It’s even possible to pair Bluetooth headphones to the projector, like the popular Apple AirPods and similar types.

The WiMiUS K8 projector seems to be in a real sweet spot, offering impressive performance while retaining versatile functionality. Overall, it does stand out compared to many alternative projectors. There are two HDMI ports, wireless streaming, Bluetooth 5.1, full 1080p resolution, a bright 480 ANSI picture with vibrant colors, up to 200K hour lamp life, and a long 4-year warranty from WiMiUS—at least at the time of this original writing. That should give you some peace of mind that you’ll have a projector that’s going to last. 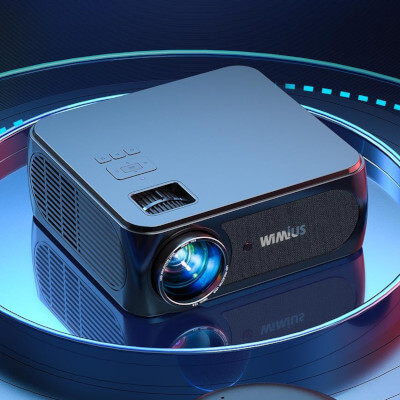 I would say if you’re a gamer of any modern platforms and play high framerate video games, this specific model runs at 30Hz and not 60Hz, which will not be quite as smooth for high framerates. If you plan on using the projector almost exclusively for high-speed gaming I would instead recommend the WiMiUS K1. It’s very similar to the K8 but runs at a full 60 fps. Though it does lack the wireless streaming capabilities. Yet I wouldn’t say that feature is essential for most people though.

For anyone not a high framerate gamer, that wants a very solid projector, the K8 seems to be a great starting point. If you’ve never owned a projector before this model is quite competitive at this price for what you’re getting. You can definitely spend twice as much for something even better, but that’s how it always is for products. You could get this model to see how you like projectors and then always upgrade down the line. Technology is constantly improving and getting cheaper.

Be sure to visit the following links to see the latest running deals. The prices can fluctuate frequently at Amazon so I’d highly recommend adding the product to your shopping cart to see a complete total cost. Also, often times the WiMiUS company offers coupons you can apply for a sizeable discount, look for those near the price information on the product page!