The WiMiUS P28 projector is another native 1080p model that offers flexible performance and admirable specs. It’s built using an LED-based light system that provides up to 9,000 lux lumens (400 ANSI lumens) according to the WiMiUS company. They also state that the LED-bulb lasts around an incredible 100,000 hours of use. This brightness rating combined with the high 10,000:1 contrast ratio makes this projector appear more capable than some other alternatives available. 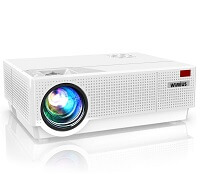 In this article, I’ll review the various points to help explain what each aspect means. There’s a lot of jargon used when looking at projectors and it can be difficult to figure out what you should be considering as “important”. Hopefully by the end of this you’ll be more prepared and be able to decide whether this model is the right choice for you. We can start with the brightness spec as that’s one of the most immediate details you may notice.

A projector’s brightness rating determines when and where you can use your machine. The higher the brightness the more versatile it can be. Maybe you would like to enjoy using your projector during the day with some outdoor light shining in or at night with a couple of lamps on. If you choose something with a low brightness it will look too faded and washed out to see clearly.

The brightness in the P28 is rated at 9,000 lux lumens and 400 ANSI lumens, from the company’s information. The “ANSI” term is a universal measurement used to make a consistent rating across brands and sources. This model will allow you to enjoy using it in a wide range of situations. If you’re considering many choices, and their specs are similar, I’d say go for the highest brightness possible if you plan on using your projector at any other time than when it’s pitch black. Though, of course, any projector looks best when it’s in total darkness. 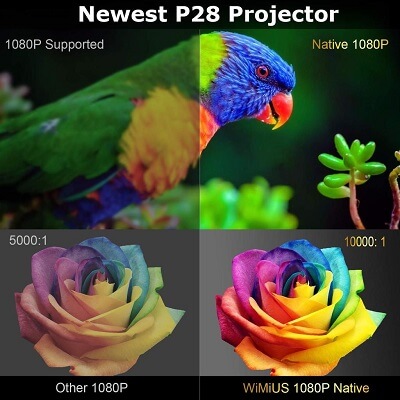 A “contrast ratio” is the range between the projector’s ability to display the colors white and black. The higher the ratio the more deepness of overall color you’ll have in your image. This means that the color black will appear darker instead of something like grey. This aspect correlates to every color so the entire picture will be more striking in appearance.

The rating in the WiMiUS P28 is quite high at a 10,000 to 1 ratio. Many other comparable projectors get in the 5000:1 range or so. Colors will be a bit richer in comparison here and this contributes to overall picture quality.

One place where many projectors struggle is in the audio department. Thankfully it’s something that you can easily improve in most models by utilizing external speakers instead. Some low-end models come equipped with nothing but a 2 or 3 watt speaker, which may be disappointing to any audiophiles out there. This WiMiUS model has a dual speaker system that provides 10-watts of power. This would definitely fill the room with fuller sound compared to a single 2-watt speaker system.

If you do treasure your audio experience I’d still recommend considering hooking up external speakers using the 3.5mm audio input. You could also try routing the sound through your audio receiver if you’re technically inclined and already have that set up. I really think audio is one of the big components for recreating an authentic home theater feel. Either way a dual speaker 10-watt system is going to give you better audio than some other alternatives. Watch this short video found on YouTube to see the P28 in action.

Another important factor to consider is the connectivity options available. These will determine what kind of media devices you can plug into the machine. You obviously want to get a projector that’s going to work with everything you have, right? The P28 has two HDMI ports which is what you’ll use for many of the latest tech gadgets. This includes streaming boxes such as Apple TV, Roku stick, and others. You’ll plug in your modern gaming machines with this like an XBOX, PlayStation, or Nintendo Switch. If you have a Blu-ray player this is also the port for you.

Having dual inputs for HDMI devices will allow you to leave two things plugged in at the same time so you’ll have less device swapping to do. It’s mainly a convenience thing but this port is used in practically everything nowadays so it’s nice having two of them so you don’t have to get up as much.

There are two USB ports that you can plug flash drives into to playback video files from your computer. Just load the videos or pictures onto a USB drive and plug it into the projector. Not every video format or encoding is supported but it’s a nice alternative if you just want to keep certain videos available at all times. I should point out that there is NOT an SD card port on this model so you cannot plug any SD cards into this projector like you can in some others. 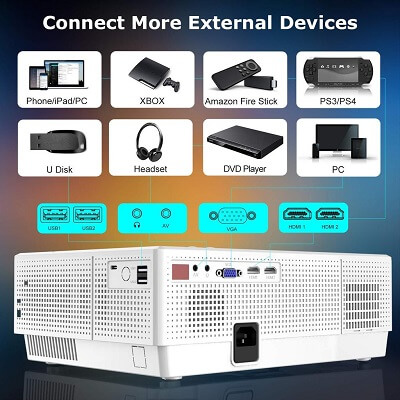 If you still enjoy watching VHS tapes, DVD discs, and playing older video games then you’ll be happy to know that there’s a composite/AV cable adapter included in the box. By using this adapter you’ll be able to use many of your legacy media devices on your brand new projector. I suppose it may not be used by too many people, but it’s a great addition for expanding the P28’s versatility and anyone looking to plug in their old stuff. You’ll just need to make sure that your appliance uses a composite/AV port and you should be golden.

To round off the last of the ports there’s a VGA input available if you’d like to hookup an older computer or something. This isn’t a port that’s used by many people anymore, at least compared to 20 years ago. If your desktop computer or older laptop has one of these ports you’ll be able to share your screen directly with the P28 projector. You could play videos, share pictures, display your PC games and more with this port. Just be aware that you’ll also need to use the 3.5mm audio port for any sort of audio. Many newer computers use the HDMI input so if your computer is newer you can likely just do the same with that.

The resolution spec is the final thing I’ll go over before rounding this all out. Companies use tricky wording when talking about the term “resolution”. You may see many products offering something that “Supports 1080P”. While it’s technically true, the term you really want to be looking for is “native resolution”. This is the true internal resolution that the projector outputs when displaying its image. So, some projectors that “support 1080p” are actually only 720p or an even lower 480p. This means you’ll get a blurrier image compared to a projector that’s natively 1080p.

This WiMiUS P28 projector offers up a native resolution of 1080p Full HD and will give you a sharp crisp picture over a lower 480p model. If you want to see a picture that’s less blurry and has more detail then you’ll definitely want to be searching for a machine with a native 1080p resolution. If you don’t care much about having the crispiest image then this factor may not be as important to you but it’s absolutely something to point out.

The P28 has recently been upgraded to include a new WiFi dongle. This will now allow you to wirelessly stream videos, photos, and more right from your tablet or smartphone. I’d say that most people tend to use this feature when they’re around a group of people. It can be a great way to share content amongst everyone and can make for some really fun gatherings.

If you aren’t familiar with this feature, it basically just mirrors your entire screen, so whatever you see will appear on the projector. Previously, and alternatively, you would need a physical cable to share your screen, and thus you’d be tethered to the machine. Some people don’t care much about this feature but it’s nice to see it added as a little extra for anyone that wants it.

There seems to be a few areas where this model excels above some alternatives. It comes equipped with a solid brightness rating, nice contrast ratio, and it supports a huge range of media devices via its connectivity options. You can play your modern games and watch your modern movies but you also have the ability to enjoy any legacy content you may have on older devices. This makes the projector really versatile overall. 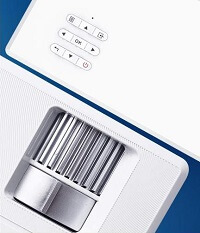 Another great bonus is that the light bulb is based on LED technology so the lifespan is an incredible 100,000~ hours of use according to the company. To get the best picture possible I should mention that you’ll need to use the manual focus wheel and keystone settings to align and focus your image. This is one of the first steps you’ll need to do after setting the machine down and turning it on. The focus wheel can be found on top of the machine. You’ll want to rotate it left or right until you see a clear picture at whatever distance you’ve set your projector at in your room.

There is an image shrinking capability as well to help you fit the picture to your screen or wall. With this function you can shrink the image down to 75% of its original size. This is helpful if you’ve set your projector too far away from your wall and part if the image is shining on your ceiling or floor. I’d say that the P28 is a solid choice for anyone looking for a true native 1080p projector. You’ll have to be the main decider to choose whether this model has the features that you’re looking for or if something else is a better fit.

Be sure to visit the following links to see the newest, latest, most up-to-date prices and offers currently running. Note that Amazon prices do have a tendency to raise and lower so add the projector to your shopping cart to see a full total cost.