The Epson EX5220 projector offers a good amount of capabilities at a competitive price. This model is not natively widescreen though and excels with input from 4:3 sources, so it’s perfect for slideshows or presentations. Don’t worry however, it will also accept input from other HDMI devices such as a Blu-ray player or gaming console. It’s important to get a projector you’re happy with, so you’ll need to weigh the pros and cons when deciding what features are most important to you.

At the moment you can get a refurbished model at a discounted price. View the deal section at the bottom of the page for more information if you’re interested. Now let’s jump right into the details about this machine!

The EX5220 has a native resolution of 1024×768 (XGA), which is a 4:3 (square) aspect ratio. You’ll notice that this doesn’t reach the HD specification. As I mentioned earlier, it will support input from a DVD player, game system, or similar source. It even has the capability to resize up to a maximum of 1400×1050 pixels. The picture clarity does seem to be quite good, even if it isn’t a true 16:9 machine. 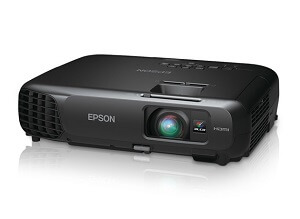 This model has a maximum brightness rating of 3,000 lumens for both its color and white output. It’s a 3LCD projector, which means there are 3 chips handling video tasks. Some other competing machines use a single chip to process video. What this means is that you’ll enjoy a bright picture with up to 3 times brighter colors according to the company. The technology also uses around 25% less power consumption.

The bulb itself is rated at 200 watts and lasts for up to 6,000 hours in ECO mode and 5,000 hours in normal mode, which is a pretty lengthy amount of time. That means if you used it on average 14 hours every week, it would last around 6 1/2 to 8 years before you need a replacement. Thankfully Epson offers a replacement bulb with a retail price of $99. So getting a new one is relatively affordable as well compared to some other machines.

One of the coolest features is the wireless streaming capability of this model. What this means is that you’ll be able to stream video files directly from your computer, tablet, and smartphone without needing to hookup additional cables. This is definitely a major convenient feature for some people.

On the back you have access to several inputs including: HDMI, S-Video, Composite, and VGA/Component. Be aware, to get component functionality you will need to buy a separate VGA-to-component cable. There’s also two USB ports available, type-A and type-B. The first being where you’ll plug in the included adapter to allow wireless streaming.

Having sound come directly from the projector is a convenient addition. Unfortunately it only has a single 2 watt speaker onboard which makes it sound tinny most of the time. These machines are relatively small so it’s understandable manufacturers have a hard time fitting a nice speaker inside. I think most people will want to hookup a surround sound system anyway, regardless whether there’s a single speaker blasting audio out.

Fan noise is a major concern for many people. It’s a big annoyance to hear a loud fan running while you’re trying to enjoy a movie, especially during scenes with quiet dialogue. The bulb generates a lot of heat, so it’s an issue companies have to deal with.

This projector is thankfully pretty quiet. It has an audible level of 29dB under ECO mode and 37dB during normal mode. That’s around the loudness of a library in ECO mode, the normal mode would be about 70% louder. After doing some research and calculating, the normal mode is somewhere around 30% quieter than a refrigerator hum, if my math is correct.

Overall the Epson EX5220 performs really well and does a good job with handling a wide variety of input. It’ll operate up to 19 feet away The wireless streaming is a huge bonus for many people. You’ll need to weigh the pros and cons of the specifications to decide whether this model is right for you.

Remember that this isn’t a native widescreen projector. If that’s high on your list, I’d recommend considering the Epson EX7230 Pro. It’s very similar but has a native resolution of 1280×800. They even have a refurbished model available if you want to save some money off the retail price.

Click the buttons below to view the refurbished models currently being offered on Amazon.

If you’d rather have a brand new machine visit the following link!