The Vankyo Leisure 420 may seem extremely similar to the popular 410 model upon reviewing the specifications. It has the same input ports available and other features that give the projector a lot of versatility. The main difference is the amount of brightness that this model can display compared to the lower model. The Vankyo 420 offers up an impressive 3,200 LUX brightness rating, while the previous was only 2,800. So overall you’ll be getting an image that you can see better when there’s more ambient light in your room. 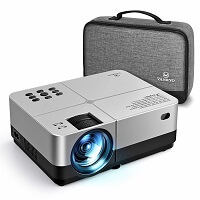 There are a lot of different things to consider when picking out the right projector. You should be asking yourself how you’ll be using the machine to help determine which one to buy. Things such as resolution, brightness, and inputs are all very important factors. Are you searching around for something that will allow your video games to be displayed on your wall? Do you just want to watch some Netflix on your ceiling? Join me on an exciting adventure explaining what the features actually mean!

Being able to hook up a huge variety of your favorite media devices is one of the most important aspects when choosing which projector to get. To start things off, the Vankyo 420 provides two HDMI inputs which is likely what you’ll be using the most. These are the ports that you’ll plug in things like an Amazon Fire TV Stick, Blu-Ray player, or modern game console. You’ll be able to stream Netflix, have a movie night, and play Fortnite on your wall or projector screen with this.

After that, there’s an old school AV composite port available. This is that yellow, white, and red cable from ancient devices such as a VCR or early video game console like the Super Nintendo or N64. You’ll be using this AV port to watch home VHS tapes and play things like Mario Kart 64 with friends. If you’re someone that does play a lot of older games from time to time it’s a really great feature to have. Being able to take advantage of the projector and seeing your old games fill up your wall is really cool.

There’s a VGA port that can be used to plug your computer in as well. Be aware, a VGA cable does not carry any audio so you’ll have to also use the 3.5mm audio port in tandem with it. I’d say this is mostly for legacy computers. Many newer laptops contain an HDMI-out port which, coincidentally, does carry audio information. If you’re a person that uses a VGA interface you’ll be good to go here.

Finally, you have a USB port and an SD card port. They can be used to playback videos directly from their storage. It does seem like the file support could be slightly hit or miss though, depending on the encoding of your videos. You’d maybe be better off using a laptop, PS4, Xbox One, or some sort of intermediary device for improved file support. You can definitely try it though and see if your videos play correctly because it will support some.

Having a higher brightness rating on a projector will allow you to use it more frequently when there’s light in your room. Obviously the preferred scenario of use is in a dark room with minimal light. This would provide the brightest/best picture you could get out of the machine. However, it’s nice being able to use your projector during the day when maybe a bit of light is around. If this is important to you then you’ll definitely want to get a projector with a high brightness rating.

The brightness of this model is 3200 LUX which is higher than the 2800 LUX of the Vankyo 410 version. This makes it preferable if you plan on using your projector with some ambient light in the room. This is really the main difference between the two models as they both have the same input ports and things. The designs are a bit different but overall they’re very close to each other.

The resolution specification is what makes the image look clear or blurry. Having a higher resolution will allow you to see extra details like the texture of fabric or dirt being kicked up during an action scene. This projector supports a 1080p source, but that’s a bit misleading, the native resolution is 800×480. I think this is completely satisfactory for most people, especially if you’re buying a cheap projector just to get into the projecting world. Vankyo does make a native 1080p device called the V600 if you’d be interested in something that’s a couple models above in many ways. 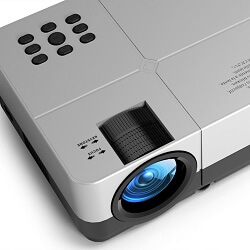 For many people I think the resolution will be totally fine and particularly at this price point. There are two rings above the lens that you can use to adjust the focus and keystone of the image. The focus ring is pretty self-explanatory and will let you fine-tune the image to appear sharp at its distance from your wall. The company recommends the usage to be between 4 feet and 21 feet. You can display an image that’s 40 inches up to 140 inches.

The keystone ring is what you’ll adjust if your image appears at an angle. Turning this will tilt the image up to 15 degrees so that it’s displayed correctly on your wall regardless of whether it’s above or below the center of the wall.

I should also mention that the contrast rating is rated at a 2000:1 ratio. This rating is based on the range of the darkest blacks to the brightest whites. The higher the number the wider range of colors you’ll typically see. Darks will be darker and colors will tend to “pop” more on the screen. Having a higher ratio will help provide an image that doesn’t look washed out or dull. Video games tend to have a lot of bright colors and so do a lot of animated movies, so it’s doubly important for that type of media.

There’s a single speaker installed in this machine, which will provide a decent amount of volume. Like always though, I highly recommend considering hooking up external speakers via the auxiliary audio port on the machine. Then you can plug in much better speakers that will give stereo sound to the room. They’ll be louder and just better in every way and that’s the way it is for many projectors because of the limited space. 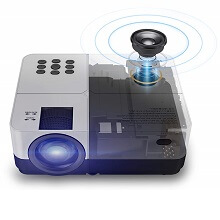 If you have some computer speakers laying around or maybe a soundbar you could just plug those in to get room filling sound and a better cinema experience. They could either be purchased with the projector or afterwards when you decide you want to upgrade at that point. Having said that, the internal speaker does output sound that is passable. If you want a more authentic feeling though you’ll definitely want to look into getting some external speakers as well to complete the ambiance.

The Vankyo Leisure 420 mini projector has several convenient features, a plethora of ports, and improved brightness. It’s a worthy choice as a starter projector and will allow you to have a movie theater experience on the affordable side. It’s perfect if you just want to play your favorite video games on the wall as well. The inputs available make this an extremely versatile projector. Plus, it comes with a carrying case so you can take it over to your friend’s house or other event.

This is also an LED based model which means that it has a very long lamp life of 40,000 hours. That’s another great thing about getting an LED-based projector, as the light will last longer than a common light bulb variety many times over. There’s also a 3-year warranty for replacement and refund so you have some peace of mind in case any issues arise. It’s certified by the FCC, RoHS, and CE as well so there’s some quality to it.

I’d recommend it over the 410 model because of the higher brightness rating. You’ll be able to plug in practically any media device to use with the machine. Ask yourself which specifications are most important to you and hopefully you can decide whether this one is right for you. Good luck and enjoy being a new owner of a home projector!

I’ve included some links below to current running offers. I’d absolutely recommend adding the product to your shopping cart to view any discounts and totals including tax or shipping.