The Vankyo Performance V600 projector is a higher end model due to its native Full HD resolution. This 1920×1080 specification gives you three times the detail over 720P models. It’s really the standout feature for choosing this over the 410 or 510 models if you want to see more detail and crisper image quality. There are several factors to consider when choosing the right projector though. Contrast, lamp life, inputs, and more are all very important. 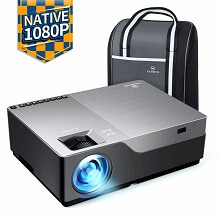 Buying a projector that is LED-based allows for a much longer lamp life over more common light bulb varieties. The V600 gives you over 50,000 hours of use, according to the company. Just imagine, if you used the device 3 hours per day on average, just how long it could last. You’d likely buy a newer model before the light even went out. Having something reliable is nice but what about the features and connectivity? I’ll jump right into the picture quality since that’s a big bullet point for this model.

As I previously mentioned, the V600 projector offers a Full HD resolution picture at a 16:9 ratio. Image quality is easily one of THE most important aspects when choosing which projector to get. Many other affordable projectors offer somewhere around either an 800×480 or 1280×768 rating. The higher the number, the more detail you can see in your picture. Something like hair, pores, and more will be clearer and less blurry. If you plugged in a Blu-Ray player or modern video game console, they would be able to take advantage of the higher resolution. It’s especially important for video games actually, because it allows you to see your enemies easier and other distant detail. 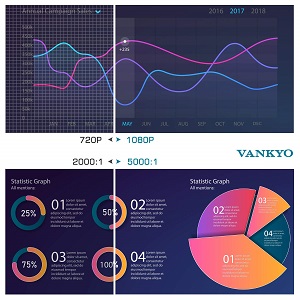 You can display an image up to 300 inches but the optimum size for outputting is 120 inches. This will easily cover a large portion of your wall and give you that cinema experience you may be looking for. You’ll be able to move the machine around and have a size that fits your needs. There is an option in the menu that lets you shrink the picture size down to 75% if you’re using the projector in a smaller room. That way the image isn’t cut off and will be displayed correctly from a shorter distance. Definitely something nice if this is for a small bedroom. The throw distance is 5.5 feet up to 30.2 feet and the keystone, which is the ability to angle the image to display correctly against a wall, is up to 15 degrees.

Having a projector that shines a bright enough picture is always going to be important. If the image is dim, it restricts when and where you can use the machine. I’m sure many people will have this planned for a dark room but it’s still nice being able to use the device during the day with some ambient light around. Thankfully, the Vankyo V600 has a brightness rating of 5,000 LUX. The company says it’s 80%+ brighter than alternatives rated lower. I should mention that the Vankyo 510 offers up 3,600 LUX, so this is a step above that for sure. Watch the very short 15 second video below to see the projector in action.

Contrast is the darkness and lightness range of colors that can be produced. This model has a ratio of 5,000:1 which will give colors a more saturated appearance compared to one from a lower rating. This means that blacks will be darker and colors will pop more on the screen. Otherwise, the image could look washed out and if you’ve ever seen that before, this is the reason for it. So, to clarify a bit, higher contrast equals better colors and higher brightness equals …brighter image, naturally.

It’s nice and convenient having built-in speakers, but I’m not sure how many people use them for serious movie watching. They aren’t nearly as immersive compared to external speakers, and I highly recommend hooking up some sort of speakers via the 3.5mm audio out port. You might even have some laying around or a soundbar you could plug into the audio port to really enhance your enjoyment. Having said that, the machine does pump out audio pretty well it seems. You may be completely fine with it, especially for casual use or if you just want convenience. For anything above that I’d definitely say to plug some external speakers in.

In today’s society you have a lot of different entertainment devices that you may want to use with a projector. That’s why it’s important to buy one that has the correct connectivity. Do you want to use a DVD or Blu-Ray player? What about an Apple TV or Amazon Fire Stick? Are you a gamer that enjoys playing on classic consoles and also modern ones? Well, you’ll be able to hook them up to the Vankyo V600 thanks to the ports located on the back of the machine. 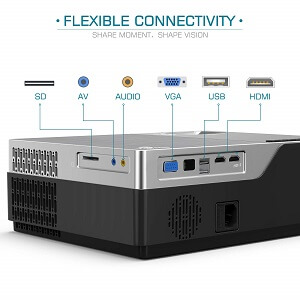 There’s two HDMI ports which will be used for your modern devices. Just plug your Amazon Fire Stick directly into one for example, just like you do on your TV, and you’ll be good to go. If your entertainment player requires HDMI, this is the port you’ll be needing. A step down would be the AV port. This is for your older red, white, and yellow cable machines such as a regular DVD player or VHS. Yeah, I don’t know what a VHS is anymore either but the functionality is there if that’s your thing.

If you’d rather just hook up your computer or laptop directly to the projector you can also use the HDMI easily, or do that via the VGA port. This port is strictly for displaying video though, so you’ll also need to use the Audio Out port for sound. It should only be an issue if you have an older computer that lacks the more modern HDMI. To finish it all off you also have the capability to plug in an SD card and play some files off of that. It’s handy but may not cover as many video formats compared to the other options. 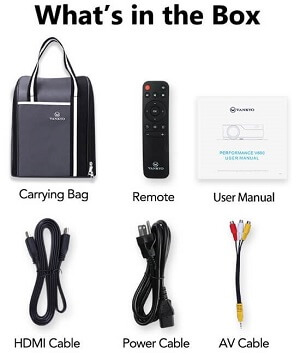 I would say that this V600 model is a good jump in performance and quality over lower-end options. The resolution will let you see full 1080P detail and the brightness/contrast combo will work together to output a nicely colored picture. It has a huge range of connectivity which will allow you to plug in the majority of your devices including older legacy machines and newer modern ones.

If you’re interested in setting up your own home theater in your basement, this could definitely be an option for you. It isn’t a well-known name, but you’re paying for functionality and not a brand name. I’m aware that there are several options out there and it can be tough deciding which model to get. If having Full HD resolution is important to you then this becomes a smarter choice over the cheaper 510/410 models which are 720P or less. Getting an LED-based machine will prevent you from having to constantly buy new replacement light bulbs as well, which can really become a hassle and expensive. 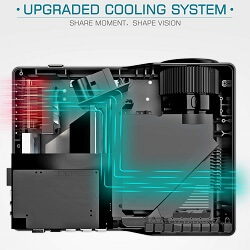 You should take a look at the technical specifications and hopefully they’ll help narrow down which projector is right for you. Most projectors nowadays have relatively the same inputs/outputs. So, it may come down to the resolution, brightness, and contrast ratings. Remember that a higher resolution will give you a clearer picture. The higher the contrast ratio the bigger the range of colors that can be displayed. Finally, the brightness is pretty self-explanatory but if you plan on using the machine with ambient light around, you’ll want one with a high brightness rating. Good luck on your search and I hope you enjoy joining the projector world.

Perhaps you’re looking for the latest prices and want to get a nice deal. I’d recommend clicking the link below to view the newly updated prices and any offers that may be currently running. I would also tell you to add the item to your Amazon shopping cart to view a complete total including any tax or discounts.