The Fangor 506 projector offers a large variety of connectivity options and impressive specifications. It’s a native 1080p model that gives you a full 1920×1080 resolution picture. The bulb is LED-based and will last up to an incredible 60,000 hours of use as well. However, looking at the details it may seem like there are other options available with similar specs at first glance. Does anything really stand out that makes this machine a better choice? 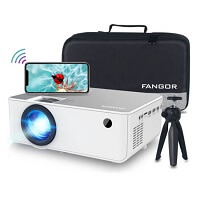 And how about that name, “Fangor”, it sounds like a super villain’s name or something. It isn’t a brand most people are aware of, so I’m sure some people are a bit hesitant or have questions. The specs are appealing but what does all this geek speak actually mean? If you’re sitting there confused just stick around and I’ll review all of the different terms and aspects to help explain everything. I think we should take a look at what is possibly the number one priority people have when choosing a projector.

Picture quality comes down to a number of factors including resolution, brightness, and contrast. This triad of ratings help tell you what kind of image the projector will produce and what you can expect. It’s typically safe to say that you want to be looking for the highest possible numbers if picture quality is at the top of your list. Though, of course, you’ll need to weigh the projector cost and your budget when considering everything. There are also really sneaky things some companies do that you should absolutely be aware of, which I’ll get into in a moment.

For a projector, the resolution aspect dictates how sharp and clear the overall picture appears. When talking about this term it’s important to pay attention to a very specific phrase: native resolution. This specification can be completely different than a projector that simply says it “supports up to 1080p”. Some companies try to hide their native resolution this way when their models only render at a lower 480p instead of full 1080p. The difference of this would be a shocking amount of image clarity. 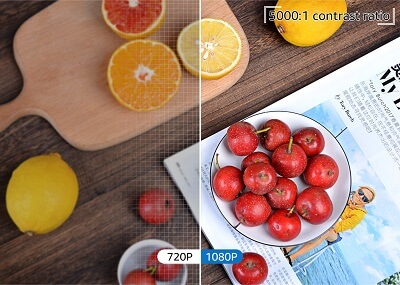 The Fangor F506 is capable of displaying a full HD image at 1920×1080 resolution. This means that you’ll see HD content with all of its visual detail including crisp textures, hair, and faces. If you’re a gamer this also means that your video games will have the same benefits including seeing things in the distance more easily. Lower 480p projectors tend to blur a lot of background objects and just have a somewhat out of focus appearance to them.

This may seem like a rather obvious section, but the brightness rating will ultimately determine when and where you can use your machine. If a projector isn’t bright enough you’ll be restricted to viewing movies in your basement or other darkened cavern. The F506 model now puts out 6,500 lux lumens, which has recently been upgraded from 5,500. I’ve seen other information stating that the 5,500 lumens was rated at 200 ANSI lumens. This puts it on par with the popular Nebula Capsule II/Max for example. With the 1,000 lumen upgrade you should have an 18%~ increase in brightness compared to the previous version, if the company’s information is accurate.

Every projector will look its best when viewed in darkness, but this model should be bright enough to use with some background light. Just be aware that the more light there is the more washed out the image could be. All of this comes down to what your plans are for the machine though. Will it be used daily or just during the weekend? Maybe you’d want to use the Fangor outside for some backyard movie watching at night? This model is able to handle that if it’s something you’re interested in doing.

Now this term is a little more complicated even though you may have heard of it before. Contrast ratio is a number rating that tells you how colorful and radiant your image will be. It’s specifically the difference between the color black and the color white, this is what contrast ratio actually means. So, a higher ratio will give you colors that pop more and seem deeper in hues. Similarly, dark colors will also look darker and less like they’re faded. The 506 model now has a rating of 6000:1, which is pretty solid and will give you a pleasing picture whether it’s animation or live action movies. This has also been upgraded from a previous rating of 5000:1 so colors should be even more vibrant.

Note: I’d recommend adding the projector to your shopping cart so that you can view a total price including any coupons or discounts available. Don’t forget to check near the price information on the product page for any coupons that can be applied for a discount before purchasing!

Next up in importance are the connectivity options available. Honestly, what good is a projector if you can’t plug in what you want? There are 3 HDMI ports to handle all of your modern devices. This includes practically everything within the past 10 years and it’s used by almost everything nowadays. You’ll use the HDMI input for game consoles like the Nintendo Switch, Blu-ray players, laptop computers, and streaming sticks such as the Amazon Fire Stick. The fact that there are three of these ports is a big benefit. You won’t have to be swapping devices nearly as frequently this way. The third HDMI port is in a hidden compartment on the side of the machine. 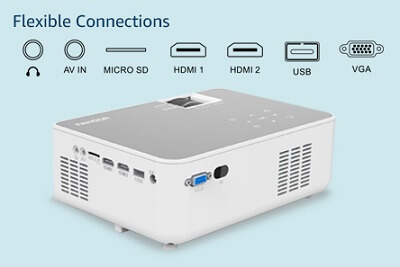 You’ll have two options for getting video files to play directly on the projector. The first being the USB port which will take whichever flash drive you have laying around. The second is a Micro SD slot, which is a very tiny memory card. Both of these ports would be a great way to keep your favorite video files attached to your projector. It may not support every modern encoding and format but it can be super convenient.

If you’re into playing classic video games or watching movies on DVD there’s a Composite/AV port for you. You’re probably familiar with this input as it uses the old yellow, red, and white connector cable. All of this content was typically running at 480p resolution or less. It’s really nice that the Fangor projector has this as an option for those that need it. If you have a big classic game collection or something you might get a lot of use out of it. Except now you’d be able to enjoy everything on a screen the size of your wall.

There’s a VGA port for older computers. This would allow you to share your computer screen from an old desktop you may have around the house. Perhaps you’d want to convert it into some type of media center. Just be aware that you’d also need to pair it with a 3.5mm audio cable to get sound as well. VGA only transmits a video signal, not audio.

Here’s one of the standout features of this model, the wireless capabilities. This is something you really won’t find on a lot of other projector models. It may even be really important and a major factor in your decision. This model includes both Bluetooth and WiFi functionality. With Bluetooth you can connect wireless speakers to enhance your audio experience and its quality. This includes AirPods or other Bluetooth headphones as well as regular full-size speakers.

The WiFi aspect will let you screen share your smartphone directly without the need of additional cables. You should note, some video apps on your phone might not let you stream video content. This is due to copyright and dumb things. YouTube should be fine though and anyone in the room would be able to connect their phone to share videos they have recorded. If you’re interested in screen sharing this might make the Fangor even more appealing. 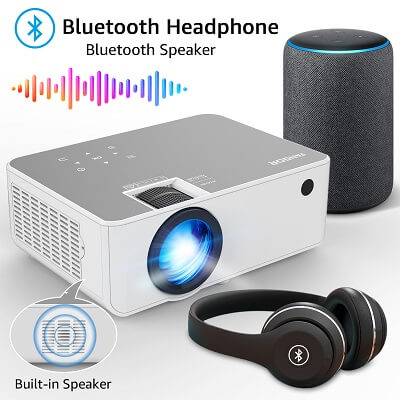 It’s great having internal speakers that can pump out audio for everyone to hear. Due to the limited size inside a projector many models tend to lack in the audio department. I’d say they do a sufficient job for a lot of tasks and may be enough for most people. This will all come down to personal preference.

However, if you really value your audio and music quality you’ll want to consider hooking up external speakers. You can do this either via the Bluetooth for wireless speakers or by using the AUX port. The audio port allows you to plug in any speaker that uses the 3.5mm jack. This would really be able to give you a more genuine cinema experience.

The Fangor 506 projector presents an overall excellent package of features and performance. It has solid picture quality due to the resolution, brightness, and contrast ratings. It’s important to point out that there isn’t any autofocus mode though. On the top of the machine is a physical focus wheel and a keystone wheel that you must adjust manually to sharpen your image after setting up your projector. Doing this will ensure you have the clearest picture possible that’s aligned correctly with your wall or projector screen. 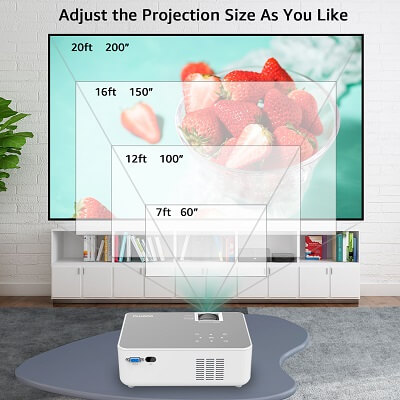 What really helps set this model apart and makes it unique is the inclusion of three HDMI ports and the wireless screen sharing ability. Similar projectors typically only have 2 HDMI ports and completely lack WiFi functionality. I should also mention that the projector comes with a pretty impressive warranty. The company states, at the time of this original writing, that they offer 3-year free repair as well as 3 months free return. This should help set your mind at ease that you’ll have a product that’s going to last awhile.

Ultimately, you’ll need to be the one that decides whether this model fits your requirements. Do you need 3 HDMI ports? How often would you use the wireless capabilities? Try asking yourself what the most important aspects are and hopefully you’ll be able to narrow down your decision. Hopefully you’ll be enjoying having outdoor movie nights and more in the near future.

If you’re looking for the newest prices and deals be sure to visit the following links below! Everything can fluctuate randomly on Amazon so be sure to add the projector into your cart. This way you’ll be able to view a complete total cost including any coupons. The coupons can typically be found near the price information on the product page. >> Click to check the latest price on Amazon.