The QKK Mini projector is a popular portable machine that offers wide compatibility. The projector is available in 3 different models: QK01, QK02, and QK03. They each may seem similar at first, but they do have a few notable differences. Does that mean there’s one you should choose over another? Well, it depends on what you want your projector to do. The QK03 has built-in WiFi while the others don’t, for example. I’ll also mention that the specifications for these models have been upgraded and improved for 2021. It does seem like recently the name has been changed to QXK, so this information should pertain to these as well. 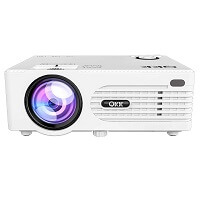 Perhaps you saw this brand and model somewhere else on the internet and wish to know whether it’s any good or not. I know there are a lot of low-cost projectors out there with specs very close to each other. At that point it’s best to look deeper into the technical information to see if there’s something that stands out. When I review everything in this article I’ll be sure to point out the differences between the 3 models to hopefully help clear up any confusion.

Many projector brands like to tout that they’re “1080p” capable. This typically means that they can accept an input/feed from a 1080p source, something like a Blu-ray or high-end gaming console. However, the internal resolution tends to be lower than that, meaning the image needs to be scaled down to something else. Having a higher resolution means image details will be clearer in appearance. It’s something you’ll notice across all types of content as everything will look sharper and more defined.

Since the technical specs have been upgraded, all three models now give you a native 720p picture, which is 1280×720 resolution. It’s not quite 1080p but this is still quite crisp and definitely an improvement over having a native 480p projector. Previously, the QK01 was known as the AK-80, both that model and the QK02 were only able render at 480p. If you care about having a clear image I’d recommend getting a projector that’s offering at least native 720p performance.

Ambient light is a projector’s worst enemy and can make the overall image look dull. That’s why the best environment to use a projector is in a personal cave. But it’s nice not having as many restrictions and being able to use your projector whenever you want. That’s why the brightness rating is something most people focus on.

All 3 models here seem to offer a slightly different rating and it may be what sways you to a specific one. The QK01 and QK02 models say they have 6,500 lux lumens now, they used to offer 4,200 and 3,800 respectively, before the upgrade. The QK03 now has the highest brightness rating at 7,200 lux lumens, previously it was rated at only 3,600. The numbers are very close though so it’d be best to compare something like customer images in different lighting conditions to see what the difference actually is. Also, check out this short video that doesn’t have audio to get an idea of the model.

The media ports on all 3 models are very similar to each other. The only difference being that the QK03 model has one USB on the side of the device, while the other models have two. These USB ports can be used with memory sticks filled with photos, music, or videos. You can then play back the files right from the QKK projector. This is super convenient if you want to leave some videos connected to your machine. You can also use the SD slot to do the same thing, you’ll just need an SD/TF card or micro SD plus an adapter.

Support for modern things is done through the HDMI port. This is what you’ll probably use the most since streaming devices and modern gaming systems operate with it. Just plug in something like an Apple TV and display your favorite streaming services like Netflix, Hulu and more. Likewise, for video games just hook up your system like a Nintendo Switch and turn it on to play your games on a huge picture.

I should mention that the QK03 model has WiFi capabilities allowing you to screencast your smartphone wirelessly without the need of any cables. This could be a nice benefit if you love sharing photos from your phone or other content. All you’ll have to do is connect your device and it will mirror exactly what’s on your smartphone or tablet.

If you’d like to utilize your older appliances, such as a VCR or DVD player, you’re able to do that via the AV port. There’s an adapter included that gives you composite cable functionality to support those types of machines. Anything that uses composite for the video and audio data can be used. It’s nice seeing some legacy support and being able to load up some DVDs if you have a few still saved.

Do you have an older computer laying around with a VGA port? You can plug that into any of these models and screen share your image. You’d probably want to turn your computer resolution down to 1280×720 or so in order to read text easier though. Just know that this is a video-only port and you won’t receive any audio information over the cable, you’d have to use an AUX cable for that.

This section talks about the range of color the projectors can produce. The higher the range, the more intense colors will be. I’m sure you’re familiar with something looking washed out and a high contrast ratio can help prevent that. Both the QK01 and QK02 have a 2000:1 ratio which is pretty common. The QK03 doesn’t have a spec number that I can find but I’ll assume that it could be 2000:1 as well. If you want an overall pleasing image it’s a smart idea to get something with a decent contrast rating. The rating here is adequate for a wide range of media content. It’s just one aspect of many that complements a projector’s picture.

There isn’t a ton of information about the speakers for the systems. The QK01 seems to have a 5w speaker inside and the other two models utilize a dual speaker setup. Most internal speakers are fine for most people. However, if you’re looking to enhance your experience it’s recommended that you use the 3.5mm audio port to plug in external speakers. You should be able to use anything that can transfer audio over an AUX cable. When you’re watching a movie on a huge screen it’d be nice to have huge sound as well to go along with it.

Well, the QKK Mini Projector series appears to offer a lot of versatility with its supported devices. You can plug in old media along with the latest appliances right in one machine. If you’re a gamer it supports the modern consoles, making it great for gaming parties. You could even take the projector outdoors and shine a movie against something during a family get-together. 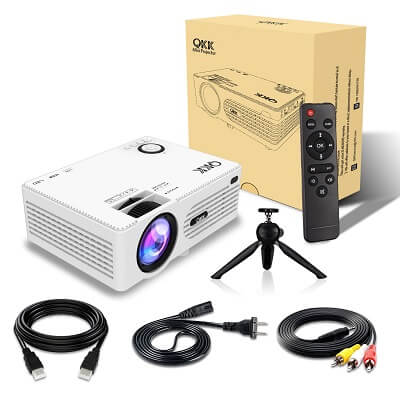 The specifications are somewhat common but the added WiFi functionality in the QK03 version could be nice perks for certain people. All of the models are pretty close to each other but I would probably recommend choosing the QK01 or the QK02, now that its brightness has been recently upgraded. Unless you really think you need two USB ports over only having one and want something WiFi capable. I should point out that these are LED-based machines so the lamp life lasts up to a very long 50,000 hours, much more than a traditional bulb type. This means you won’t have to deal with buying replacement light bulbs all the time too.

You’ll have to be the one to decide whether any of these models fit what you’re looking for. Make a list of pros and cons for each one and try to narrow down your options. You should definitely choose something that’s at least “native” 720p for a clear picture and then look over what connectivity options you require at home. Good luck in finding your ideal projector and welcome to the world of projecting!

Head on over to the following links to see the most current prices and deals being offered. There are sometimes coupons you can apply to get a discounted price so be on the lookout for those on the Amazon product page. You can usually find them near the price information. I’d also recommend that you add the item to your cart to see a complete total price. Finally, to reiterate once more, the original brand seems to have adopted the QXK labeling for their projectors.