The DBPower Q6 projector uses an LED-lamp that lasts up to 50K hours, according to the DBPower official documentation. This could help save you some money in the long run by not needing to buy replacement light bulbs every year or two. The brightness is rated at 8,000 lux lumens and the machine has a 10,000:1 contrast ratio for striking colors. This model offers really solid performance in comparison to several alternatives, but I’ll cover more about the details below. 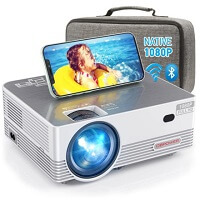 Then I have to mention the huge amount of connectivity options that are available to you. This will ensure many of your favorite devices, old and new, will work with the projector. I’m aware it can be a difficult decision when choosing a projector. There are so many choices, especially in this price range. I’ll review things piece by piece to explain what everything means and hopefully it’ll help you make a smarter purchase. Let’s talk about the connectivity first.

It’s great being able to hookup as many media appliances into your new projector as possible. The input that you’ll surely get the most use out of are the two HDMI ports. Perhaps you have a dedicated Blu-ray player to watch HD movies, or an Amazon Fire TV device to stream content from. The HDMI is what you’ll be using for those.

If you have any gamers in your family you can also use the HDMI port for gaming consoles such as the Nintendo Switch, PlayStation 3/4/5, or Xbox. It’s a real benefit having two of these slots on this model. Imagine how often you’d need to get up to swap devices with only one HDMI port. This way you could have a media streaming stick and a game console plugged in at the same time.

For the other modern inputs you have two USB slots and one SD card reader. One of the USB ports can provide 5V of power for your HDMI streaming sticks. These inputs can also be used to play video files loaded from a hard drive, SD card, or flash drive. All you have to do is transfer your movies over and the projector can automatically play them without needing an additional device. It won’t support every format but it’s a great way to keep movies accessible from your machine at all times. Some popular formats it supports are MP4, MKV, and AVI.

You’re also able to enjoy watching or playing older content via the RCA/AV input. This port utilizes an included adapter to take in content from a red, white, yellow cable source. Older game consoles use this like the N64, GameCube, and more. Technically you could use this for playing these classic games on your wall, or unpacking your VHS tapes for some home movies. Anything that uses those old 3-colored cables can work here. Most people probably won’t use this port much, but it’s great to have for anyone interested in it.

If you need to do some light visual presentations or slideshows from an older computer, you can use the included VGA port to accomplish that. This input has been replaced on newer computers by HDMI. It’s pretty outdated now, especially since it doesn’t carry any audio data, but it’s nice for someone that does have a use for it. Maybe you have an old desktop computer you want to turn into a media center for the projector.

Talking about resolution can be a bit tricky and might get confusing to some. Manufacturers sometimes hide their projector’s true resolution for marketing reasons. You’ll see this a lot on sub-$100 models, they’ll only say they “support” 1080p. In actuality the hardware is rendering at a lower resolution, typically 720p but some are as low as 480p. This means you’ll see a blurrier image with those compared to a true 1080p projector. Watch the following video to see a quick overview for this model.

The DBPower Q6 has a native resolution of 1920×1080, rendering at 1080p Full HD. That’s displaying over double the amount of pixels than a native 720p machine in comparison. If you enjoy playing the latest video games the higher resolution will allow you to see much more detail. Objects in the distant will be easier to see and textures will appear sharper. You’ll see the benefits of having a higher resolution in all forms of media. It’s especially useful if you plan on having a large image size, since the pixels will be spread out over a wider area.

Every time you move your projector to a new location, you need to take a couple of steps to ensure the image looks its best. Firstly, this projector should be placed directly in front of your wall or projection screen as I don’t believe there’s any horizontal keystone. You’ll use a physical keystone wheel, located near the lens, to angle the picture vertically until it’s flush with the wall. You have a range of about 15 degrees to angle everything correctly. 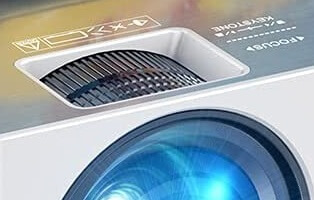 Once you have the picture squared away, you’ll need to turn your attention to the other wheel, which handles the image focusing. You’re probably familiar with how binoculars work and the concept is the same here. Rotating the wheel left or right will alter the focus distance. You’ll need to change this depending on how far away your projector is from the wall. Some people forget to do this and wonder why their image looks overly blurry.

It’s essential to have enough brightness so you can use your projector when you want. These LED-based models always seem to be improving over time, I remember just a couple years ago they only offered 2-3K lux and now we’re up to 8-9K lux brightness. Most of these projectors can be used while there’s some minor light in your room. I’ve even seen some people have taken it outside while there was an overcast sky and the picture was still viewable. Of course it’ll look its best under the darkest conditions but everyone will appreciate having some viewing flexibility. 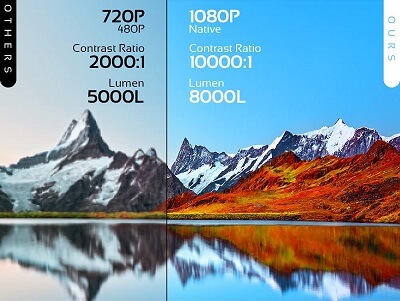 The DBPower Q6 model has a brightness rating of 8,000 lux, which should provide you with plenty of chances to enjoy using your machine. The description for this specific model states it’s an “outdoor” projector. It’s mostly true under the right conditions. Grab a power extension cord and take the whole thing outside for some evening movie viewing. Having some friends over or want to let your kids sit outside while watching a movie? This is an example of what would be possible.

It’s important to have a projector with a strong contrast so colors don’t look washed out. The contrast ratio is what determines this and the Q6 delivers a very impressive 10,000:1 ratio. Do those numbers mean anything to you? To put it simply the ratio is the range of the colors: black and white. The higher the ratio the more vivid and saturated everything will appear. This rating is actually on the high-end for these LED models so overall you’ll see brighter colors while retaining the detail of darker tones. 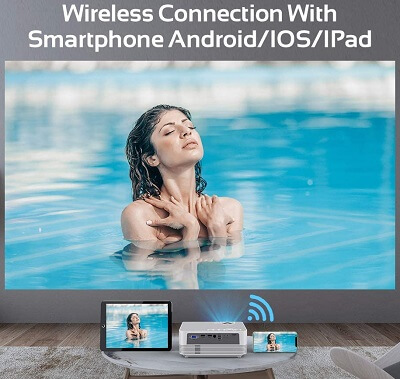 Having WiFi built in is great for anyone that wants to stream content from their smart device to their projector. This could be videos, photos, games, and more. The ability mirrors your entire screen so whatever you’re viewing on your device will appear on the projector. One drawback is copyright protection, some video apps block their content when streaming from a phone. To get around this barrier you’ll need to use a separate device like an Apple TV, Amazon Fire TV, or Roku to view those apps. It’s a fun additional feature for when you have people over since they can connect to the projector as well to share their stuff.

There’s also Bluetooth support here if you’d like to pair your Apple AirPods or any other Bluetooth-enabled speaker/headphones. It can be a convenient way to add larger speakers to the machine. You can do this by going into the settings and switching Bluetooth on to search for your Bluetooth speaker. Once it finds your speaker you should be good to go and immediately have audio coming from them instead of the DBPower Q6 projector.

Internally there are two 3-watt speakers pumping out stereo audio. They’ll do a fine job for most common-sized rooms and this is the typical size you find in these types of projectors. If you’re an audiophile and you want to propel the audio quality further you can use the Bluetooth, HDMI pass-through, or the audio out port. Be aware that you usually can’t use Dolby audio so you’ll need to turn that audio setting off in whichever device you’re using if you’re having any audio issues. 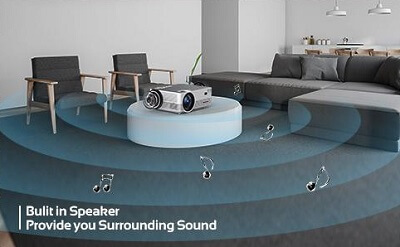 Bluetooth is obviously a wireless solution and perfect if you already have a wireless soundbar or speakers. The HDMI pass-through requires you to route everything through an audio receiver for your home theater system. Then there’s the standard 3.5mm audio port for wired headphones or external speakers that utilize this port. A quick tip, you could try using the red/white parts of the included AV cable to output your audio to an audio receiver that takes in a left/right analog audio source.

As far as LED models go the DBPower Q6 projector excels in several areas. For starters, the higher brightness and contrast will allow you to enjoy using your machine in more situations. There’s an included carrying case so you can easily transport the projector to another room, outdoors, or over to someone else’s house. Then there are all of the connectivity options available to you, which means you can plug in almost any of your media devices. These different aspects work together to form a very versatile product. 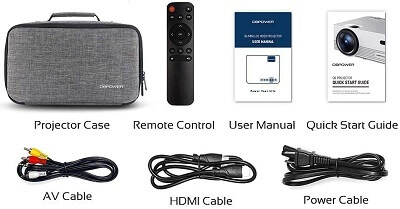 If you’ve never used a projector before the Q6 is a great starting point to jump in at a reasonable price. You’ll have a Full HD 1080p capable machine that can handle Blu-ray discs, HD streaming content, and the latest video games. Unpacking the product and seeing a movie or game at 100″ or more is such an awesome experience. A traditional projector with a replaceable light bulb can be brighter but at 2-3x the cost.

I think it’s a good place to start, just to get your feet wet. In the future you can always upgrade even further and move this model into another area or gift it to someone. If you are interested in similar alternatives I’d suggest you consider the L23 and the RD828 models from DBPower. Overall, I think people will be quite pleased at how easy it is to create your own home cinema.

Are you also scouring the web for the latest deals? Visit the following links to view the newest prices and offers. If there are any discounts being offered be sure to apply them. I also recommend adding the item to your cart, that way you can see a total cost including any coupons or taxes applied.