The Vankyo Leisure 530W projector is an interesting new model that has several modern features not found in alternative projectors. You may be wondering how it compares to other Vankyo models, such as the 510W or the popular V630. One of the most noticeable changes is the improved “throw distance”, which will now give you a 20-25% increase in screen size. 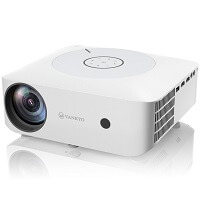 The 530W comes equipped with many versatile inputs and impressive specifications at first glance. There’s even wireless capabilities built into the machine to allow you to screencast your smart devices directly to the projector, without the need of any wired cables.

There are a few different aspects to consider when buying yourself a projector. Do you live in a dark cave where the brightness setting isn’t as important? Basically: are you Batman or Gollum? Or do you plan on doing some sweet outdoor movie viewing at night? I know it’s important to make a smart decision, so I’ll try to break down every term and detail to help you better understand everything. I can begin by going over the new throw distance and then review all of the other technical details. Let’s go!

So, just to clarify, the term Throw Distance refers to what size the image will be at a specific distance. It also tells you the range that the projector can be usable and focus at. All models have a minimum, maximum, and recommended range. 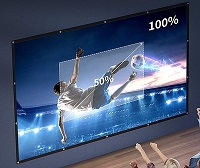 Here’s where a big difference comes in with this model since it now utilizes a new 1.35:1 throw rate. Let me give you an example, other projectors will display an 80″ screen at a distance of just under 10 feet or 3 meters. Because of the shorter throw rate, the Vankyo 530W will display a 100″ image at the same distance. This might be really handy if you have limited space in your room.

Having wireless functionality is something relatively new to find on these “more affordable” projectors. The 530W supports both 2.4Ghz and 5Ghz WiFi bands. With this feature you’ll be able to easily connect your phone or tablet and stream various content you have stored. Basically, it mirrors everything you see on your device right to the projector including videos, photos, games, and more. This makes it super convenient to share and watch things with your friends and family. In fact, anyone can connect their phone to the machine to share their media. 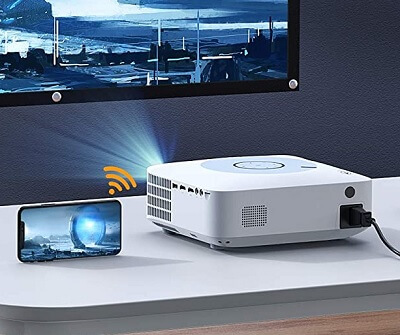 I should point out that, due to copyright issues, you typically can’t stream video apps such as Netflix or Hulu via screen sharing. Please note, this is only an issue when using the screen sharing feature and it’s something blocked by media companies to protect their intellectual property. It’s also an issue regardless of which projector you end up getting. You’ll need to use some sort of media stick like a Roku box or Fire TV stick to use these apps directly from the machine, instead of from your smartphone or tablet. I do believe YouTube will work but dedicated apps with copyrighted video will fail to playback when screen sharing.

There are two types of resolution terms companies use for their projectors; the main term you want to pay attention to is “native resolution”. Don’t be fooled by projectors that only claim they “support 1080p”, this can be a bit misleading since many are actually only running at 480p. It simply means the projector can take in a 1080p source and display it, but it’ll only be as good as the native 480p specification. 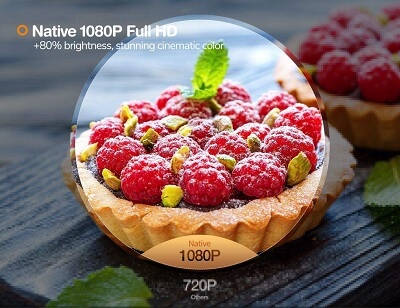 Thankfully, the Vankyo Leisure 530W model is a true 1080p projector that internally renders at a full HD native resolution. This means you’ll see extra visual detail compared to a weaker 480p machine. If you play video games the edges and textures of objects, characters, and the world will be much more defined and easier to distinguish. Movies will also appear crisper and much sharper overall. I’ll also mention that this Vankyo model can support 4K sources as well. If you love enjoying 4K content then there’s support for that here too.

Companies have a few different light technologies to use for their projectors including traditional bulbs, space-age lasers, and LED lights. They all have their advantages and disadvantages like cost, life, and more. The Vankyo 530W is an LED-based projector and the main benefit is the astonishingly long lamp life of up to 90,000 hours. Compare that to traditional bulb machines or laser-based ones which only last about 3-8K and 20-25K hours respectively. So, you won’t need to be buying expensive bulb replacements every year or two. You can do some math but 90,000 hours should last you quite a long amount of time.

Contrast ratio is maybe something you’ve heard about before. To break it down to its core idea, it’s the difference between the color white and the color black being displayed. The higher the range, the greater the ratio. With a high contrast ratio you’ll see colors that have much more saturation and deeper hues.

The Leisure 530W has a large 10,000:1 contrast rating. To put that into perspective, the popular V630 model has a rating of 5,000:1. So, the 530W should have better colors and tones overall, especially when it comes to animations and video games. I’ll also mention that the typical contrast ratio found in a movie theater is only 500:1. 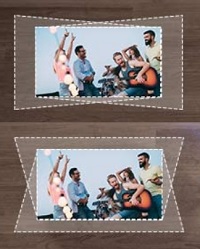 When you set your projector up for the first time, and every subsequent time you move the machine to a new location, you must adjust the alignment and focus controls. I think this is a common mistake that some people make. A projector isn’t like a TV where you can just turn it on and it’ll automatically have the best picture possible. There are settings that require a little simple tweaking.

Once you place your projector down, you’ll use the digital keystone controls to align the image to your wall or screen. This makes the picture appear as a nice even rectangle. If you don’t adjust this you may see some sort of trapezoid shape instead. 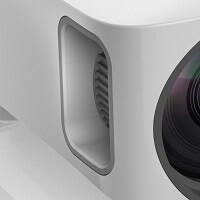 The second step you’ll want to do is adjust the focus wheel. This should be pretty self-explanatory but rotating this wheel will allow you to sharpen the image. Think of it like a telescope or binoculars, the projector requires a specific focus level depending on its distance to the wall. The focus wheel can be found on the side of the machine, near the lense, by the way.

It’s awesome being able to hook all of your beloved devices up to a projector. The more inputs there are, the wider range of content you can enjoy experiencing. To start things off there are two HDMI ports available. These are very popular connections and almost everything uses them now. Here’s where you’ll plug in your favorite gaming console, Blu-ray player, TV streaming stick, and anything else that utilizes HDMI connectivity. Having two of these ports is extra convenient, since you’ll now be able to leave multiple things plugged in at the same time, with less device swapping.

Additionally, there’s a USB port and an SD card slot. Both of these ports are capable of playing back video files directly. All you have to do is load what you want to watch onto a flash drive or MicroSD card, and the projector can play them back, without the need of additional devices. This could be especially good if you plan on watching movies outdoors at night. It’s a nice way to keep a collection of videos viewable on the projector at all times. The USB port can also be used to power TV streaming sticks.

As far as legacy support goes, this model has a composite video, or AV, port. You can use this input for old DVD or VHS players and classic gaming consoles from the 1990s and 2000s. The projector does support 4:3 display ratios to accurately project them too. This port uses an adapter that goes from the projector into single red, white, and yellow connectors from once upon a time ago.

You’ll notice that this model doesn’t have a VGA port like the V630 has. It’s honestly an outdated connection so it’s not very surprising but it’s definitely something I should point out. If you require a VGA input, you’ll need to consider an alternative. If you don’t know what VGA is, it’s what older computers used to use to output a video signal.

Vankyo claims the 530W projector has a unique surround sound cavity design that allows for audio that provides more bass and a higher overall volume. Still, if you really want to take your experience to the next level, you’ll want to pair some external speakers to the machine. 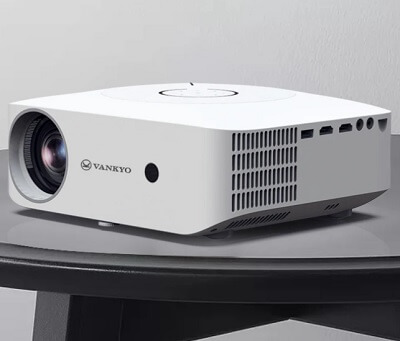 There are several ways to get audio to an external source. The easiest and cheapest is probably by using the 3.5mm Audio Out port with some computer speakers or a sound bar. For personal listening you can also use this port with a pair of headphones.

Another, slightly more complicated way, involves you routing the audio through your home audio receiver, if you have one. This would let you use your current home theater system.

The final way requires an additional accessory that is called an audio converter. It takes in an HDMI source and splits the audio to a variety of options including: optical audio, HDMI, and even analog audio (red and white connectors). This type of device should cover most speaker systems in my opinion. If you’re interested in the device, view it here on Amazon: J-Tech Audio Converter

The Vankyo 530W projector definitely has some quality improvements over other choices. It’s a true 1080p machine with a high contrast ratio and a lot of connectivity options for your devices. If you’re a gamer Vankyo is also using an updated chipset for lower input lag. Pair all of these aspects with the super long 90,000 hour lamp life and you’ll likely have a projector you can enjoy using for years to come. 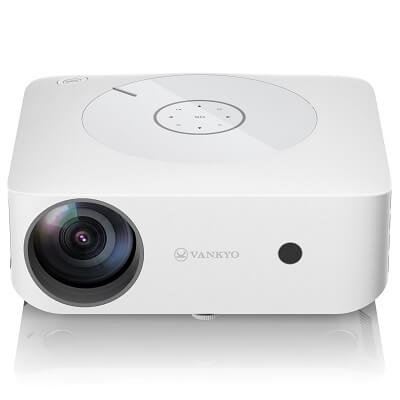 Thanks to the ±50 degree alignment setting and the ability to shrink the image, you should be able to be quite flexible with where you place the projector. Once everything is set up correctly, you’ll be able to connect most of your media devices right away. Don’t forget that there’s also wireless screen casting for all your smart devices too.

Another nice bonus, at the moment, is an included projection screen. This immediately gives you a perfect way to display your movies and games. Screens usually tend to work a bit better than using your plain wall, so it’s a great addition. Just invite some friends or family over and enjoy having a movie night outside. Owning a projector can be a wonderful experience and give you a fun new way to spend time with people you care about. Or you can use it by yourself in your dark basement/cave, that’s pretty sweet too.

Are you also interested in finding some deals and offers? Click the links below to see the most current prices. Vankyo does occasionally offer coupons so be sure to check if there are any to apply. I would suggest you add the projector right to your shopping cart in order to see a complete total.

"As an Amazon Associate I earn from qualifying purchases. This does not influence the content presented and helps keep the site running."