The Vankyo Performance V700 projector is the beginning of a new product series. It has a striking design that you’ll notice looks really sleek and high-end. I feel like it will fit really well in most people’s rooms because of this. It’s definitely an improvement over some previous models design-wise. But just like your mother used to tell you, looks aren’t everything. The real question is whether you should buy this model over an alternative, right? 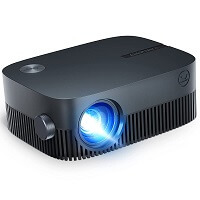 If you review the specifications you’ll probably see a few differences. For example, the claim of 4K support, does that mean you can enjoy 4K content with this model? Technically yes but the answer is a bit more complicated, which I’ll cover below. One thing that you may not notice is the fact that the V700 includes a large 10W speaker. This is quite a bit bigger than some previous models and will produce much better room-filling audio. I’ll try to explain as much information as possible so that you’re better prepared for your decision.

Talking about resolution can get a bit confusing. There are some people, and companies, that seem to stretch the truth a little in this area. You’ll see claims that projectors support, or are capable, of a high resolution. However, just because a product says it supports 1080p or 4K, doesn’t mean it’s actually running at that resolution. Shocking, I know. 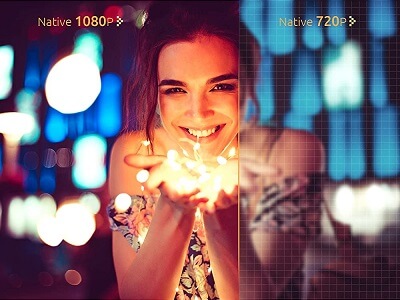 There’s a specific term to look for called “native resolution”. This is the real internal rendering resolution of a projector. Some companies like to bury this information down to make their projector look better than it actually is. For example, an $80-100 projector may say it “supports 1080p” but is actually only running at 480p or 720p. They do this because the projectors can take in any 1080p media source. But the picture quality will only ever be the true native resolution. The clarity and sharpness of your picture is directly linked to native resolution. A 480p image will look much blurrier than a true full HD 1080p image.

The Vankyo Performance V700 has a native resolution of 1920×1080, which will give you a clear Full HD picture. It does also support 4K sources so you can view any 4K content. Obviously it’ll only be 1080p but it’ll still be sharper than some lower resolution models. It’s important to point out that true 4K projectors cost several thousand dollars.

Another important aspect to a projector in regards to picture quality is a term called contrast. To break this down as simple as possible, the ratio is the brightness between the color black and white. The higher the rating, the more saturated and striking your image will appear. In this model you’ll find a contrast ratio of 10,000:1. It’s actually quite high and will give you vivid colors whether you’re watching animated or live action content.

Of course everything will look its best at night or with at least minimum ambient lighting. If you plan on using your projector during the day, having a higher contrast does tend to help retain better colors in the overall image. There are several other models that only offer 5000-7000:1 ratios, so you should have a more pleasing image in comparison. Also, it’s important to note, that the average contrast ratio of a typical movie theater is only 500:1.

There are many connectivity options to choose from on the V700 projector. You’ll be able to plug the latest media devices in as well as some ancient legacy stuff. If you’ve seen similar models, the ports included here are relatively common, but definitely versatile and complete. If you’re looking to have a machine that’s capable of handling a wide range of your media, this model is capable of practically everything.

To start off, you have 2 HDMI ports. Without a doubt you’ll likely be using these two inputs more than anything else. You can hookup your modern video game console, Blu-ray player, laptop, or even media devices. Anything that utilizes HDMI will go here and thank goodness there are two ports instead of only one. This means you won’t have to get up and swap devices nearly as frequently. 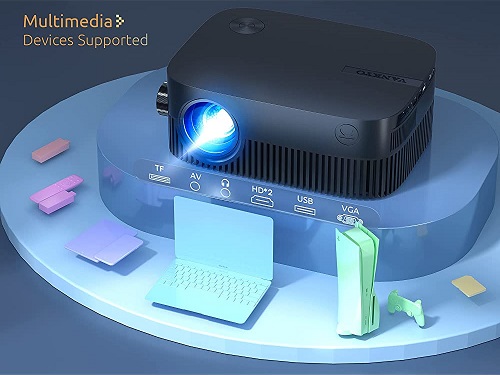 There’s 1 USB port that has a couple different uses. It can be used to either power media sticks, such as an Amazon Fire TV Stick or similar device. You can also load video files onto a USB flash drive and the projector will play them back by itself, without the need of additional hardware. Some other Vankyo models have two USB ports, in case that’s important to you.

The SD card slot can be used with SD cards, imagine that. Similarly to the USB flash drive you can load video files onto an SD card and play videos back directly. It’s a really convenient way to keep a video collection accessible from the projector.

Do you enjoy watching old VHS tapes or playing classic video games on older hardware? Well you’re in luck if you love the idea of using your projector for that. The included AV/RCA/Composite port allows you to hookup older media devices that use those archaic yellow, white, and red cables. Play all your home videos (no I’m not talking about that type) on your wall to reminisce about the good ol’ days. 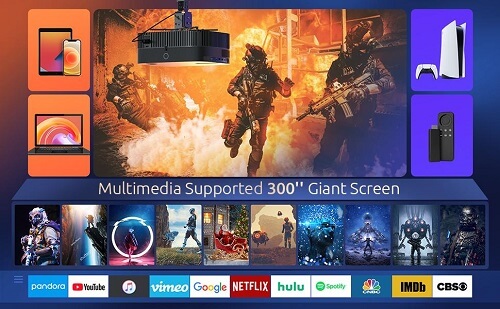 You also have 1 VGA port available which is mainly used by older computers for presentations and screen sharing. It’s a video-only port, meaning audio needs to be sent using a separate port. VGA is outdated and not used by too many people anymore. But hey, if you have an old computer laying around and need the VGA port, it’s here for you.

Quick note, if having a component port is important to you, I’d suggest checking out the older V620 model. It just isn’t a very common port to find anymore now that HDMI is so prolific.

Most projectors require two important adjustments to ensure you get the best picture quality possible. This is because of the projector’s ability to display an image in a wide range of sizes. A machine that’s close to the wall will have a different focus setting than when it’s placed further from the wall. Think of it like a telescope, you’ll need to make these adjustments whenever you move your projector to a new location.

I don’t know how many people actually know about this step, but you do now. The first setting you’ll want to adjust is called the “keystone“. On the Vankyo V700, this is changed using a small dial found on the back of the machine. The keystone is what aligns your image to the wall or screen. Mess with this until it becomes perfectly rectangular and not a trapezoid. This model can be placed up to 15 degrees off-center while still being aligned.

The second setting you’ll be changing is the focus wheel. Rotating this will let you fine-tune the sharpness of the picture. This adjustment may be the most important since it controls how blurry or sharp your image is. For modern games an HD content this is really an essential step to take. The throw distance ability of this model is 4.9 ft to 30.8 ft. Between those distances you should be able to dial in a clear picture.

Now this is an interesting section to talk about. There are a lot of projectors that have between a 2-watt and 5-watt speaker. In fact, that seems to be the most common range in this sort of category. However, this Vankyo V700 projector has a quite large 10-watt speaker. This means it’ll be much louder and fill your room with better sound than alternatives with a smaller speaker.

There is an audio port where you can plug in external speakers or a sound bar if you have them. If you plan on using external speakers anyway then the larger internal speaker doesn’t really matter for you. But if you want an all-in-one system, and audio is important to you, you’ll definitely want to consider this model over others. 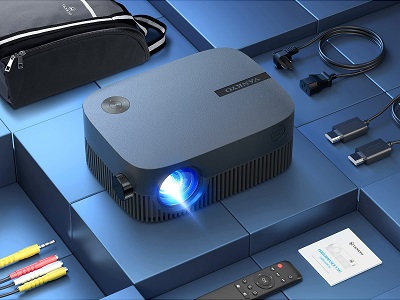 The Vankyo Performance V700 projector has a great clean design with impressive specifications overall. It’s also incredibly versatile thanks to all the connectivity options. You can use the projector with almost any of your media devices. Use it with a modern video game console, a video streaming stick, or even legacy stuff like ancient VHS tapes. You’ll have the capability to enjoy such a wide range of content with this machine.

I know a lot of people enjoy watching movies outdoors in their backyard at night, which you could do with this projector. You’ll need an extension cable for the power and either an outdoor inflatable screen or just put a white sheet up. Whether you have a family or love having friends come over to hangout, everyone will enjoy watching movies or playing games on a giant screen.

There isn’t any wireless streaming built in for smartphones and tablets. If you want to screenshare your mobile devices you’ll need to use a physical cable or adapter. I’m sure some people won’t even care about the lack of screen sharing, but if you do, I’d definitely recommend checking out the Vankyo 530W model. It has some similar specs and features you may be interested in. Hopefully you’re now more well-informed and can decide whether this model is right for you.

If you’re wanting to find the latest prices I’d like to suggest you visit the following links. Sometimes the Vankyo company offers coupons so look for those on the product page. Be sure to add the projector directly to your shopping cart just so you can view a total cost including tax and any discounts that may be applied.

Update: This Vankyo model doesn’t seem to be available on Amazon anymore. You can click the link below to see the current best selling projectors right now. I’d also recommend you take a look at the WiMiUS K8 or WiMiUS K1 projectors as possible alternatives. They both sit at the top-end of LED-based projector choices based on features, performance, and price.

You can also check out Amazon’s best selling projectors at the button below to find more alternatives.