The Vankyo Cinemango 100 mini video projector has a comprehensive set of connectivity options along with admirable specifications. This combination seems to make Cinemango 100 a great choice for people that want an easy start into the world of projectors. You have a lamp life of over 50,000 hours which means you won’t have to constantly be replacing expensive light bulbs. With 4000 LUX of brightness you’ll also be able to use the machine when there’s some ambient light in your room. 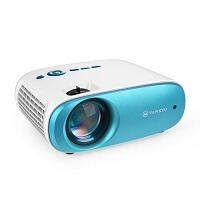 Looking at the variety of models to choose from, you have to be asking yourself why you should buy this over something else. Does this offer a better value compared to alternatives near this price point? How does it differ from the other models from the Vankyo company? I’ll try to review all the details and go over the functionality to help explain everything to you. Hopefully you’ll be able to make a well-informed decision. I think I’ll be starting with the resolution as that’s a bit of an interesting bit of information.

Resolution is a term that people love throwing around and using to make something sound impressive. Some models say they “support” 1080p, which is a bit misleading. The real term you want to look for is the “native” resolution, this is the internal rating and what you actually see on your wall or projector screen. The higher the native resolution the crisper everything will appear including pores and textures. Video games will also be sharper due to the higher “real” resolution. 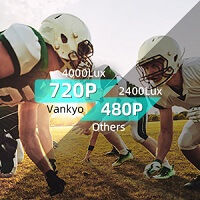 The native resolution of the Cinemango is 1280×720, so it technically reaches HD. Many other projectors around this range seem to commonly only offer a 480p native resolution, so this 720p is actually a bit surprising in my opinion. The popular Vankyo Leisure 3 is 800×480 for instance. Buying the Cinemango will be clearer and a bit sharper in comparison to those 480p machines. If you wanted a true 1080p image you’d have to look into something like the V630 model. This 720p is a nice sweet spot and better than some other options in this range though.

It’s nice having a clear image, but being able to see the picture is equally important. This is where the brightness rating comes into play. The Cinemango gives you 3,800 LUX of brightness which is enough to use with a little bit of ambient light around. Of course the optimum environment for any projector is when it’s as dark as it can get. But being able to enjoy using your projector at different times and situations can be super convenient. 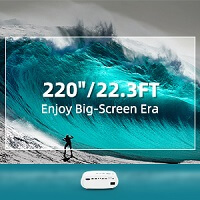 Contrast is another technical aspect that has to do with the colors of the machine. Having a projector with a higher rating means colors will be shown much deeper. The rating of this model is 2000:1, which is a relatively common number for these and average to many others. I think most people would be happy with the color saturation, especially in a dark room during movie night or a gaming session.

As I mentioned earlier, the lamp is an LED-based one which is why the life span is so incredibly long. With it lasting 50,000 hours you won’t have to worry about maintenance costs here compared to if you purchased a typical light bulb projector. Doing a little calculations, if you used the machine for 4 hours a day, every day, the lamp would theoretically last 34 years; I’m sure you would upgrade before that time however. And other parts could fail or have issues, naturally, but not having to worry about the lamp life is a huge benefit that.

Here’s another area where the Vankyo Cinemango 100 really shines. There are a ton of connectivity options available for you to use covering a huge array of media devices. The system has 2 HDMI ports and that’s where you’ll hookup your Nintendo Switch and other video game consoles. As well as media sticks such as an Apple TV, Amazon Fire Stick, or Roku. If you have a Blu-ray player or any other HDMI device it’ll also be plugged in here. Thankfully there are two separate ports, so, you can leave two different devices hooked up at all times and easily switch between them without having to constantly be getting up. 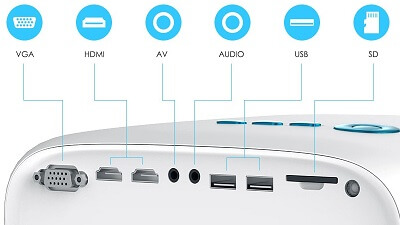 Next on the list are 2 USB ports and this is where you’ll plug in USB drives to play movie files from directly. If you have a lot of movies and things on your computer at home you can load them onto a USB stick and play them back right from the projector. Just be aware that it won’t support all the newest encodings and file formats. But it’s really convenient not always having to plug in an additional device just to play some movie files. If you have some SD cards laying around you can also puts video files on them and plug it into the SD card slot.

Do you love playing older consoles like the Super Nintendo, PlayStation 2, and GameCube? What about watching VHS tapes that you still have or DVDs from your old movie collection from the early 2000s? Well, you’re actually in luck because the Cinemango has an AV port. This is that old red, white, and yellow cable that was commonly used in the 90s and 2000s. You could watch old home video tapes right on your wall or load up the original Super Mario Bros video game with this port. Just plug your systems into the AV adapter and you’ll be good to go.

If you have an older desktop computer and want to display it on the wall you can do that with the VGA input. Many older computers were built before the advent of HDMI. So, this would be a way to see your older computer to perhaps play PC games or something. I don’t think it’ll be used by too many people but it’s definitely nice to see the port here just in case and covers another group of users.

To round everything off, there is a standard 3.5mm AUX jack to plug in external speakers or a soundbar. The speaker that the projector comes with a typical and does an okay job at pumping out audio. If you really want to have an elevated experience you should probably seriously consider getting some external speakers as well. You might already have some that could work if you have an old computer with speakers or a soundbar for your TV. 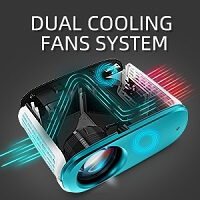 If you plan on only using the built-in speaker you’ll at least be happy to know that it’s quieter than some alternative models. The Vankyo company stated that they’ve equipped it with their newest dual-fan system for even better cooling performance. This should help you focus more on the audio and less on the fan noise. Projectors need airflow to stay running cool and safely but fans do inherently also cause some noise.

Overall the Vankyo Cinemango 100 seems like a strong choice for a first projector in my opinion. Buying a projector that is native 720p will ensure that things you watch appear sharper than on a 480p machine. Then you have the high brightness rating and a ton of connectivity options available to use as well. I would probably recommend this model over the 400-series and the Leisure 3 honestly, since the Cinemango has slightly better specs. Also, note that this projector comes with a long three-year warranty. If you have some sort of issues 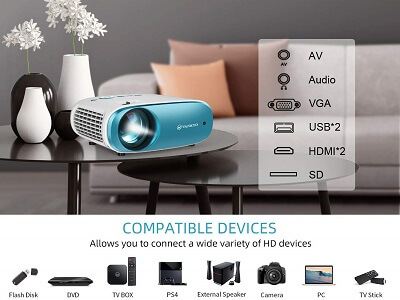 I’ll also reiterate the super long lamp life of 50,000 hours. You won’t have to spend a few hundred dollars replacing an expensive light bulb that won’t last anywhere near 50,000 hours. Start having a movie night with your family and friends. Maybe you could take the machine outside and project a movie on the side of your house or giant white sheet. If you’re a gamer just imagine having your entire wall be your game world. You’d be able to do that sort of stuff with this projector and it’s easily portable to move between rooms.

To get an idea on the throw/usage distance; at 3.94 feet you’d see a 40 inch image and at 9.8 feet you’d see a 100 inch size. Hopefully you can narrow down your choices and options out there, I know there are a ton, and choose the projector that’s the right fit for you. I hope you at least have a more comprehensive understanding about this model now and welcome you to the projector world!

Check out the following offer links to see the currently running prices. The Vankyo company does tend to offer coupons sometimes so visit the links and add the product to your shopping cart to see a total value including and taxes, fees, and coupons applied. Also see the newest version in an all-white color!