The Vankyo Performance V620 projector clearly has a model number that is higher than the V600 and V610, but is it really an improvement over those? When you first compare the specifications to the other versions it might seem like it’s actually a downgrade. The brightness rating has now been upgraded to 6000 lux, the same found in the other models. You might be asking yourself who and what this product is for and I’ll try to point out the unique differences that may, or may not, appeal to you. 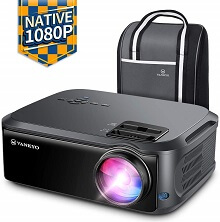 There are definitely a lot of positives going for the machine. It has a native 1080p resolution to output crisp images, a relatively low fan noise, and great connectivity options. It can be slightly difficult and confusing to choose between the 600-series projectors from Vankyo. Hopefully I’ll be able to cover as many details as possible and help you make the best buying decision. I’ll begin with the input ports available.

Here’s where one of the unique differences begin with the V620. This model actually supports “component” video functionality via the Y/Pb/Pr port, just be aware that this cable is unfortunately not included in the bundle. This is a port that used to be widely available a decade ago and was found in high-end DVD players and the XBOX 360 game console. It provides much better color accuracy and clarity compared to “composite” video. The Y/Pb/Pr port is not available on the other projectors in the 600-series. So, if you need component functionality this might be a major advantage. 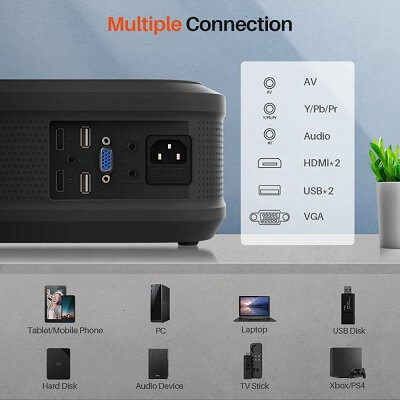 If you have an older media device like a DVD player or something you may be using the AV/Composite port. This cable is included in the box thankfully. These typically only had a 480p output so they won’t be able to take full advantage of the HD resolution. It’s still nice being able to plug in an old game console or watch your old DVD movies. Having options and the versatility is great.

Do you want to plug your desktop computer into the projector as well? You can thanks to the blue VGA port located onboard the rear. It’s important to note that the VGA port only carries video information, so you’ll need to use the audio jack to pass-through any sound. I guess this could also be for presentations since you wouldn’t need the audio aspect.

There are two HDMI ports that you can use for your latest gadgets. If you have a PlayStation 4 or Xbox One, this is what you’ll use all the time. You can even plug in a media stick here such as an Amazon Fire TV to watch Hulu or Netflix. Being able to see everything displayed across your entire wall is pretty amazing and can give you that cinema feel. 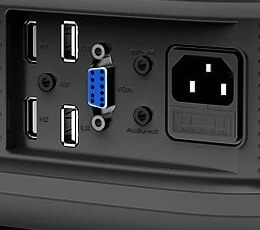 Are you the type of person that loves loading movies onto a USB flash drive? Well, there are two USB ports on the back panel where you can plug them in at. The projector is capable of playing the files directly without the need for an additional media device or computer. However, it may not support every format so you may need to do some testing, but it’s awesome being able to play the files right from the projector when it is supported.

There’s a 3.5mm audio jack where you can plug in some high-quality speakers. If you have a soundbar or some AUX speakers you can plug them in here with the right cable. There are dual internal speakers that can pump out stereo sound while you’re watching movies or playing games. They do a fine job on their own but if you’re really going for a cinema experience, you’ll want to look into upgrading the audio for room-filling audio.

I mean, you can’t expect a machine this small to compete with a home theater system of course. What’s here is totally adequate and some people may find that it’s all they need. Or perhaps you’re just getting this for your kids and that isn’t a priority. The nice thing about that is it’s totally up to your situation and can be improved upon in the future whenever you want.

So, obviously brightness is one of the most important points when buying a projector. Some of the ultra small phone-sized projectors can be quite dim and require a pretty dark room. The brighter your projector the more situations you’ll have to use it. The Vankyo V620 has a rating of 6,000 LUX which is now the same as what’s in the other models of the 600-series. Of course any projector will look its best in a pitch black room but it’s nice having the option to use it with a lamp on or something. Watch the short 30 second video below to see the machine in 360 degrees and a bit more information.

Another important mark is the contrast ratio. This number says how saturated your colors are and the deepness of the black levels. Having a higher number means you’ll see more vivid colors and the color black will lean more towards black instead of a greyish color. The rating here is an impressive 5,000:1 and that is the same number found in the other V6XX versions.

The number you really want to be looking for here is called the “native resolution”. Projectors can have a pretty big range with this number, but many cheaper ones start in the low 480p spot. This model offers up a Full HD image and is 1920×1080 for its true resolution. You’ll see fabric looks much clearer and see a lot more detail in textures when this number is higher.

See, this directly relates to the amount of pixels are shown. The more pixels you have, the sharper the overall image will appear on your wall or projector screen. If you’re a videophile you may want to ensure you get a projector that’s native 1080p. 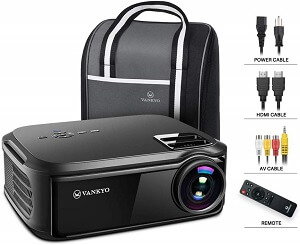 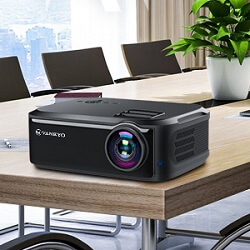 I’d say there are a few reasons to choose the Vankyo Performance V620 over other options. If you’re looking for a projector that’s “Component” capable for instance, this isn’t found on the other V6XX versions. The projector also has M4 screw holes in case you’d like to mount it from your ceiling. This can be a nice option so that the machine is out of the way; it’ll be easier for people to walk in front of it if it’s mounted somewhere above.

There’s an upgraded cooling system that helps keep the projector quieter so you aren’t disturbed by a really loud fan. The drawback compared to the other models are perhaps the 15 degree keystone correction instead of 45 degrees. This is what allows you to align the video image against your wall even if the projector is at an angle. I think 15 degrees is fine for most people but there could be some situations where you’d need a bit more. 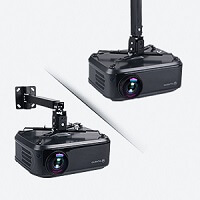 On the positive side there is a super long 3-year warranty included and a 100% money back guarantee. That’s pretty surprising to me given that it’s not a very well-known brand. The company was started in 2017 so they must believe in their products at least a bit in order to offer that type of reassurance. I think most people would be very pleased with any of the projectors in this series but you’ll have to list the most important aspects for you personally and hopefully you can narrow down your decision. I hope you can get the projector that’s right for you!

Update: Apparently the Vankyo projectors have been taken off Amazon temporarily. If you would consider similar models from other brands, I’d suggest reading about the Fangor 701 and the Dr J AK-50, though they do lack the component capability.

Visit the links below to see the latest prices and deals being offered as there’s a chance they may fluctuate from time to time. You should also add the product to your shopping cart to see a complete price including any coupons, taxes, and other things that may be applied.