The Vankyo Leisure 470 projector is another addition into the 400-series models. It comes equipped with some nice features and specs including having a native resolution of 1280×720. This means the displayed image will appear a bit sharper than something like the preceding 410 for instance. It’s also capable of 4000 Lux of brightness and has an MStar Advanced Color Engine providing a contrast ratio of 3500:1. You’ll see bright colors that are more vivid and deeply saturated compared to a projector with lower technical ratings. 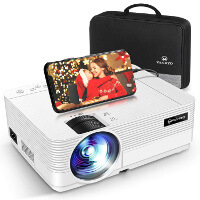 But is there anything different compared to the 460 version, which also offers a native 720p picture? I know you’re probably here to get some answers and sort out all of the information. The numbering system can be a bit confusing, especially when glancing over all of the descriptions. I’ll review the many aspects of this model to help you better understand what’s changed and important things you should pay attention to. Hopefully this will make it easier for you to decide whether to get this projector over something else.

One of the biggest things that has been added to the 470 is wireless functionality. With this tech you’re now able to screen share from your phone to the projector without any cables required. Previous Vankyo models needed an additional accessory in order to do wired screen casting. This is a big benefit for anyone that wants to be able to share photos, videos, or anything really that they have on their smartphone. If this aspect is something you’re interested in then I’d say definitely consider this model over preceding versions.

It’s really convenient being able to have a projector that supports a comprehensive set of media devices. The Vankyo 470 contains 2 HDMI ports for all of your modern machines. This is the port you’ll be using the majority of time since almost every newer appliance requires it. You can plug in a Roku stick, Apple TV, Amazon TV stick, new video game consoles, Blu-ray players, and more with this input. I should mention that the Vankyo 460 only includes a single HDMI port. So, with the 470 you can keep two things hooked up simultaneously, instead of constantly having to swap between stuff. 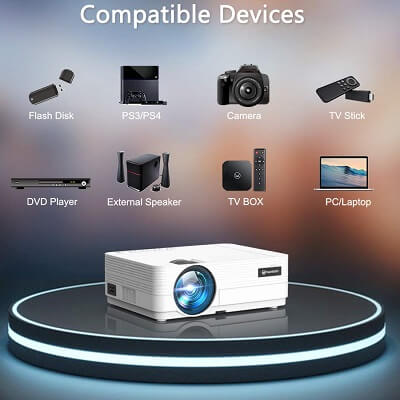 There’s one USB port you can use for two things, power for your HDMI media sticks and the ability to read video files off of flash drives. If you have a USB drive laying around and some video files stored on your computer you can play them back directly from the USB stick. It’s pretty handy doing it this way so you don’t always have to hookup an additional device that reads video files. The 460 model offers two USB ports, but I think the HDMI ports are more valuable to have.

You also have an SD card slot, if you happen to still use those. Just transfer video files onto an SD card and it’ll act the same as the USB drives. However, the nice thing about using an SD card is that it’ll sit flush with the system and not be sticking out. You can keep a collection of shows or movies in your projector at all times.

Would you like to be able to use your projector with older devices such as a DVD or VHS player? What about classic gaming systems like the PlayStation 2? Well, you have support for all of those machines and anything else that uses AV/Composite input. This is those old red/white/yellow plugs you may remember using many years ago. Having legacy support for older appliances makes the projector so much more versatile. At least you’ll have the option to use it if you ever need it.

Another input here is the VGA port which is typically used with older computers. Maybe you have an older notebook computer or desktop that outputs via a VGA cable. Use this port to screen share these older computers with your projector. I don’t think there will be many people that end up using this but of course it’s nice that it’s included.

Finally, there’s an Audio Out port which will allow you to hook up a soundbar system or other external speakers. There’s only a 3-watt internal speaker installed in the projector, and that’ll do an okay job of outputting audio. But to get a better auditory experience you’ll want to be considering some speakers to plug in. All you need is something that uses a 3.5mm standard AUX cable. Maybe you even have some at home already that will work.

Okay, so there are a lot of connectivity options available but how does the projector actually perform? Resolution is a pretty important factor, don’t you think? Vankyo has thankfully upgraded their native resolution to 1280×720, making the Vankyo 470 a 720p machine. The earlier models had something like 800×480 as their native resolutions even though they support 1080p content. What this basically means is that you’ll see a clearer picture with more detail in video games, movies, and streaming. 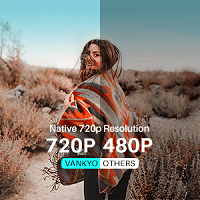 Both the 460 and 470 versions offer the 720p specification. Having a higher resolution is especially important for gamers since the overall image will be less blurry, allowing you to see characters, text, and objects better. Movies and TV shows on Blu-ray or a streaming service will also be crisper allowing you to see materials and textures with greater fidelity.

Being able to use your projector while some sort of light is in the room is another essential aspect to consider. Do you plan on only being in a dark dungeon basement while watching stuff? Unlikely, so it’s smart to choose a model that has a high brightness which will allow you to use it more frequently. 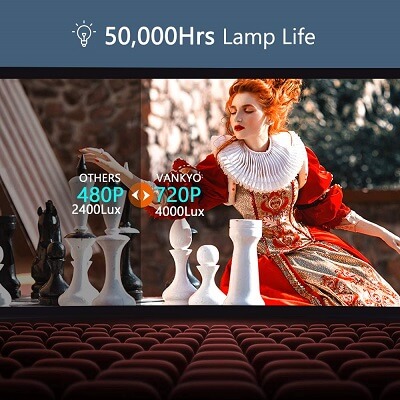 The 470 has a brightness rating of 4000 Lux and that should let you enjoy your machine even when there’s a light on or the sun is out. The optimal time to be using a projector is of course at night or when you can minimize ambient light. But you want at least a little flexibility to choose when you can turn it on. I’ll also mention that this is an LED-based model, which means the lamp life is a lengthy 50,000 hours of use. You can do a few calculations to figure out how long the lamp will last even if you’re using it everyday…. hint: it’s crazy long.

Well contrast is an interesting subject as it’s how you judge the colors. The rating for the 470 is 3500:1, which is slightly higher than the rating found on the 460 version. Contrast ratio is the range between the darkest black and the brightest white. So, having a higher number means you’ll see colors that are richer and more impressive. If you play Nintendo games or watch a lot of animated movies you’ll definitely appreciate a higher rating.

I think you can probably guess by now whether the Vankyo Leisure 470 is right for you. It supports a massive amount of media gadgets from the old and to the new thanks to the connectivity choices. Create your own home cinema and watch movies on your wall with friends and family. If you play video games have the entire game world displayed on your wall. This model seems to be quite versatile and a clear improvement over the previous ones. 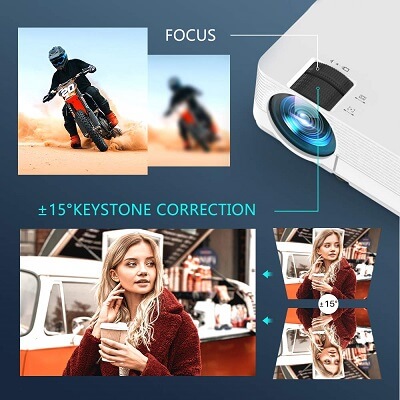 Compared to the 460 version you get 2 HDMI ports instead of 1, a slightly higher contrast ratio, and wireless screen sharing capability. Then if you’d like to compare it to the models before that there’s also a higher native resolution. Make sure you use the manual “focus ring” on the machine to precisely focus the displayed image to be as clear as possible. As you move the projector around from different distances remember that you must refocus the picture. You can also use the “keystone correction” to adjust the angle of the image up to 15°+/-. This will ensure you have the best picture possible.

Overall, the Vankyo 470 is a good starting point to jump into the world of projectors in my opinion. Out of the 400-series it’s likely the one I’d recommend the most due to it’s advantages over the other models. I’d also like to quickly point out that you receive a carrying case, power cable, HDMI cable, and an AV/Composite cable so you can enjoy your device right away. Hopefully you have enough info now to figure out if this fits your personal needs.

Update: This Vankyo model isn’t available on Amazon at the moment. Are you interested in similar models from other brands? If so, I’d suggest reading about these other popular projectors below.

Before going, make sure to click the following links below to see currently running deals and offers. The Vankyo company occasionally offers coupons on their products so keep an eye out for that on the product page near the price location.

It’s recommended that you add the projector to your cart to view a final price with any coupons, taxes, and anything else applied.